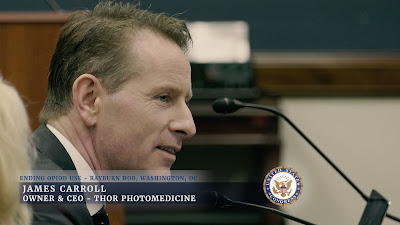 Mr. Chairman, members of Congress ladies and gentlemen. I am James Carroll, CEO and founder of THOR Photomedicine.

I am sure are all too aware there is an opioid crisis. A hundred million adults in the United States are affected by chronic pain and $600 billion a year is spent on in health care, direct health care costs and lost productivity because of pain.

So we believe that Photobiomodulation therapy can help reduce the prescribing of opioid medication for pain relief and we wish to draw attention to the Congress and health care policymakers, NIH and CMS, about this potentially valuable tool.

I will start at the beginning, what is photobiomodulation therapy?

Some of you may have seen a TV show in the past called Star Trek.

On Star Trek when somebody was injured they would be taken to sickbay, and the doctor would get out a laser beam and aim it at the injury, and the patients would heal instantly, well that is photobiomodulation.

It is not as fast as on TV, we don't heal people instantly, but you get the idea, we shine a special kind of light on people, and they get better more quickly.

So what is this Photobiomodulation?

Photobiomodulation (PBM) Therapy previously known as Low-Level Laser Therapy (LLLT) is the application of monochromatic light which means light of one color, and if we have light at the right color (or to use the technical phrase the right wavelength) and if the light is of the right intensity, and if we aim it in the right place, for the right amount of time, then we can increase the speed of tissue repair, we can reduce inflammation and edema, and we can induce an analgesic effect.

Most of the published clinical evidence is on musculoskeletal pain (sprains and strains and creaky joints), but there is also evidence for its effect on neuropathic pain, non-healing wounds and oral mucositis a severe side effect of chemotherapy and radiotherapy for which opioids are often prescribed.

Treatments look like this, usually directly to the skin or an injury and it can be intraoral, it can be extraoral, we can do some remote treatments as well. 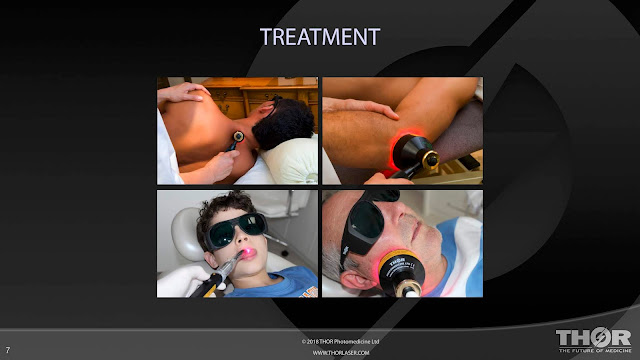 Photobiomodulation (PBM) is not a heat therapy, the effects on the body are more like photosynthesis in plants because humans and animals will photosynthesize, and you know this already but you not have thought about it before, but you know when we go out in the sun we change color, that is a form of photosynthesis, and we use light to help synthesize vitamin D, and you may know that in hospitals they treat premature babies with blue light to prevent neonatal jaundice, and you may know that dermatologists  use ultraviolet light for treating psoriasis and vitiligo, so we should not be surprised if light has some other effects on the body.

Normally you and patients and many doctors will associate lasers in medicine with cutting and cauterizing tissue. The good news is that not all lasers are dangerous,  some of them are more dangerous than others and that's because there are different classes of lasers. 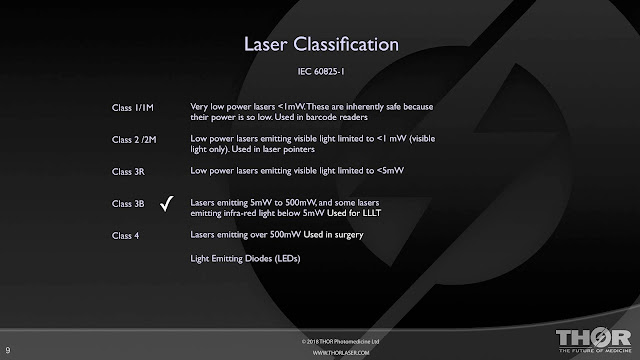 Class one lasers are inherently safe, they are used in supermarkets for reading barcodes and nobody gets hurt. The medical lasers you are probably thinking of are Class 4 lasers, they're the ones that have a thermal effect.

For the sake of this presentation, we are going to assume that lasers and LEDs do the same thing because mostly they do, we do not have time today to explain when it is best to use lasers or when it might be best to use LEDs.

There are 500 randomized placebo control clinical trials published on PBM and yet most people in medicine have never even heard of it.

There are over 4,000 laboratory studies looking at the mechanism of action and dose-response, and about thirty peer-reviewed research papers are published every month in this field.

Some of the popular medical applications of PBM Therapy include: hard to heal wounds (such as diabetic foot ulcers, venous ulcers and pressure sores), musculoskeletal pain such as tendinopathies, neck pain (as reviewed here in The Lancet). Reduced use of opioids for Post-operative pain. Postherpetic Neuralgia one of the worst pains that you can get. It’s chronic persistence hypersensitivity and in some patients and its really severe,  people can’t wear shirts and they can’t lie down, they can’t bear to be touched, it drives some people to suicide. At the end of the study 95% of patients discontinued all medication. At 6-month follow-up 80% maintained their reduction in pain. 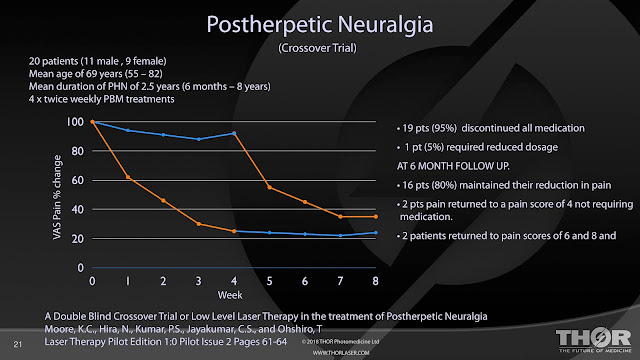 Oral mucositis is a painful, debilitating side effect of high dose chemotherapy and radiotherapy often requiring opioids for pain control. Thirty-three clinical trials (RCTs) have shown PBM Therapy to be effective in reducing the incidence and severity of oral mucositis.


The Multinational Association for Supportive Care in Cancer (MASCC) recommend the use of PBM Therapy for treating oral mucositis, and in the United Kingdom the National Institute of Health and Care Excellence  (NICE) recommend cancer patients receive this treatment in the UK National Health Service (NHS).

It has been shown in one long term follow-up Oral Mucositis study on 108 patients followed up to 8 years that the active PBM threated group had better long term (cancer) progression-free survival than those in the placebo group.

How can one medicine treat so many different diseases?

You know you shouldn’t believe anything that appears to do everything. PBM does not do everything, it treats one thing and it treats it very well, it is something scientists call it Reactive Oxygen Species (ROS), doctors call it Oxidative Stress, and most patients would call them Free Radicals 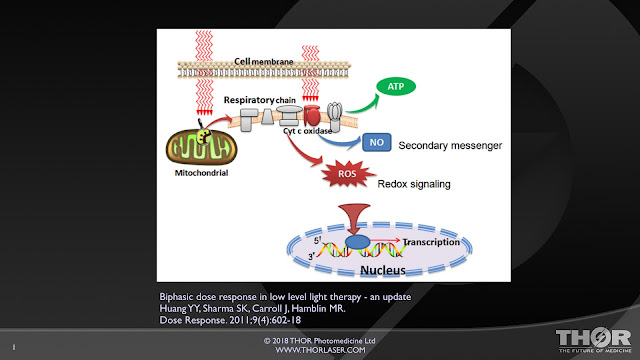 The short story is; when we're sick, injured, stressed or just old, our cells tend to be low on ATP,  high in oxidative stress, when we put PBM Therapy into patients it tips the balance in favor of more ATP and less oxidative stress, and under these circumstances patients get better and more quickly.


PBM Therapy is safe and effective for a wide range of medical conditions where drugs and surgery have failed. It is time for this proven procedure to be considered as a first line medical treatment.

This is not just another form of pain relief, it actually helps people heal.

James Carroll has been working on Photobiomodulation for over 30 years (since1987). He is a recognized authority on Photobiomodulation dose, dose rate effects and the measurement and reporting of parameters. He has written or co-authored 18 published academic papers and three books on Laser Photobiomodulation. His most recent appointments include: Biomedical Optics Society conference chair, Fellow of The Royal Society of Medicine, and Editorial Board of Photomedicine and Laser Surgery. He also served on the World Association for Laser Therapy and the North American Association for Laser Therapy. James recently presented Photobiomodulation to the United Nations Global Health Impact Forum.
Posted by Scot Faulkner at 4:00 PM

PLEASE READ PLEASE READ PLEASE READ
Hello everyone, i would like to share my experience on this platform. i have been hearing of Blank Atm for a while and i applied through a few people but i was scammed, not until i found Mr George who saved me from scammers, i got my blank ATM card in 5 days after application and tried the encrypted card in an ATM machine and pos cash store to my greatest surprise i was able to withdraw $3000 and that was the daily rate i applied for. to be honest there is no risk involved the card is not traceable and has an infrared signal that blocks off CCTV during your withdrawals. i just payed my daughters tuition fee and cleared my mortgage debts, i am also richer and started a business that is doing fine. Mr George is really a life saver and he is very genuine. You can contact him with this email address: blankatm402@gmail.com
Best wishes

Do you need a Legit hacker to help you with a programmed blank ATM card you can use in Withdrawing $5000, $10,000 or more daily from any ATM Machine anywhere in the world for 5 years?

If yes contact them on whatsApp +15085930940, or Email him on liqiudwormhackers@gmail.com.

And get your already programmed Blank ATM card immediately he is really good and he help in changing my financial status, your appreciation in me is more than what you have done. I’m really grateful.