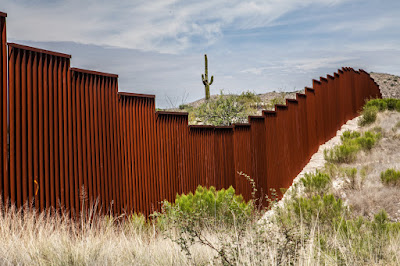 
The solution to America’s Border Wall is hiding in plain sight.

Instead of fighting what may be a losing battle with Congress, President Trump should trigger a well-established, legal, and proven good management practice of “reallocating unused federal funds” to build America’s Border Wall.

All it will take to complete the next phase of the Border Wall is the stroke of President Trump’s pen and a push of a button from the Office of Management and Budget (OMB).

The simple solution is mining “unobligated balances” throughout the Executive Branch.

Every year funds are allocated for federal projects and programs based on estimates. Congress adds money when those estimates fall short, even if caused by waste and fraud. Funds sit idle when spending is less than expected.

Families face this situation all the time. You take cash to buy fast food and have change left over. That change ends up in a coin jar. A family member eventually takes the coin jar to a bank or Coinstar to turn pennies, dimes, nickels, and quarters into easier spent dollars.

Presidents, since Lyndon Johnson, have funded their priorities mining these unobligated balances through the mechanism of a “budget sweep”. The President authorizes the Director of OMB to request Executive Branch Departments and Agencies to return unobligated and unexpended funds back to the Treasury.

Then something changed. During his eight years in office, President Obama allowed $914.8 billion in unexpended, unobligated, funds to pile-up across the federal government. He never did a budget sweep. This number continues to climb under President Trump, who has also not authorized a budget sweep.

Unexpended, unobligated funds are dutifully reported under “Assets and Balance Sheets” of the federal budget released each year by the Office of Management and Budget. These funds are documented, in detail, in every Department and Agency budget under the accounting code “1941”. For the current fiscal year, there is over $150 billion in “1941” unexpended, unobligated balances in the Defense Department alone.

An additional $1.028 trillion remains unexpended among general accounts, and $461 billion remains unspent in trust funds. While these funds are technically obligated, the fact that they languish for years raises questions about their use, management, and relevance.

There is, therefore, a total of $2.651 trillion in existing Executive Branch funds potentially available for immediate reallocation.

In June 2012, to his eternal credit, former Oklahoma Senator Tom Coburn issued a blistering report, “Money for Nothing” that exposed these funds for the first time. Unfortunately, not even conservative media covered it.

Senator Coburn documented this in his “Money for Nothing” report:

“In total, the federal government is projected to end fiscal 2012 with more than $2 trillion in unexpended funds that will be carried over to next year, according to the White House Office of Management and Budget. While more than two-thirds of this amount is obligated for specific purposes, $687 billion remains unobligated, meaning it is essentially money for nothing."

The existence, processes, and uses of unexpended, unobligated funds were reported by the few conservatives among Trump’s Transition Team, to no avail. OMB officials were given detailed 1941 account spread sheets, as were several Cabinet Secretaries and their staffs. Nothing happened.

Trump must take control of the Border Wall project with processes and funds that already exist and are in plain sight.

Posted by Scot Faulkner at 1:44 AM