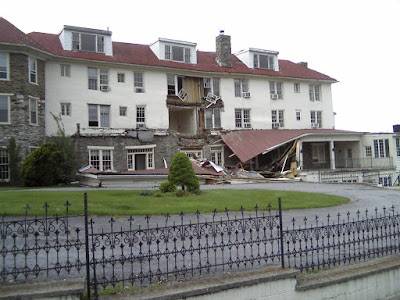 SWaN’s goal is to stampede four of the seven voting Members of the Harpers Ferry Town Council to ignore, bend, and invent rules in order to give the out-of-state billionaires everything they desire as quickly as possible.

Facts and laws must drive the decision that will shape the next century of Harpers Ferry.

The first reality check is to remember that the Hill Top Hotel was fully operational the day SWaN bought it.  Tour groups filled its rooms, hungry customers lined up for Hill Top’s famous fried chicken and buffet, and community groups regularly met there.

The second reality check is to remember that it was SWaN, no one else, who closed the Hill Top Hotel. They asserted that Hill Top must be completely torn down.  To validate their assertion, SWaN allowed Hill Top to become derelict.  No repairs occurred, windows were broken, and water seeped in, collapsing the hotel’s front facade.  Those saddened by Hill Top’s current state of disrepair should remember who is responsible.

The third reality check is that the Town of Harpers Ferry owns the roads and undeveloped paper streets that SWaN so desperately craves.  These streets were laid out by War Department engineers under President George Washington.  They were officially documented in the 1869 War Department plat.  These streets are not “fake”.  They contribute to the integrity of Harpers Ferry’s Historic District, which was established by the Department of Interior in 1976.  Harpers Ferry’s Town Ordinances do not allow for the sale or transfer of these streets to anyone. The 2016 Ordinance amendment was only intended for disposing of Personal Property. No street has ever been given, sold, or ceded to anyone since 1790.  No amount of undocumented assertions changes this.

The fourth reality check is SWaN’s heavy-handed efforts to control public access to the Promontory.  Armed thugs brandishing guns have accosted members of the community when they are on paved portions of East Ridge and Columbia Streets.  In one instance, Harpers Ferry police had to order a SWaN thug to “stand down” and retreat to actual SWaN property.  SWaN refuses to release its “Security and Safety” Policy that will dictate when the community can access the Promontory.  Their secret policy could all but eliminate access.

SWaN’s proposed land swap of their nearly vertical property for all the adjoining paper streets would bankrupt Harpers Ferry.  Accessing the Promontory using a massive zig-zagging wooden stairway would generate lawsuits and costs for making the 45% incline comply with the Americans with Disabilities Act.  No-one in a wheel chair, on crutches, or infirm may be able to enjoy one of our region’s greatest vistas.

The fifth reality check is that the number of Harpers Ferry visitors has increased since Hill Top Hotel closed in March 2008.  That year 260,000 visitors entered the Park.  In 2017, there were 342,534 Park visitors, an increase of 31.7 percent.  Since Hill Top closed, Harpers Ferry has been listed as one of America’s top tourist destinations in countless travel magazines and websites.  Harpers Ferry is certainly not a dying ghost town portrayed by SWaN’s acolytes.

The final reality check is about the true nature of SWaN and its proponents.  None of those appearing at Town meetings, or writing as “residents”, were involved, in any way, with the thirty preservation initiatives, since 1988, that saved the historic and scenic resources of the Harpers Ferry area from being destroyed. None of SWaN’s “community” proponents helped with the 50th Anniversary of the Park, the Centennial of the Second Niagara Movement, or any of the Sesquicentennial commemorations of the John Brown Raid or the area’s Civil War battles.

No one from SWaN even had the decency to attend the funeral of Bill Stanhagen, the person who sold Hill Top to SWaN.

These are the realities of the Hill Top project, and its supporters.

Hopefully, they will be aired during the March 9 Town Workshop on the Concept Plan.

Scot Faulkner is President of Friends of Harpers Ferry National Historical Park and co-chaired the Fiftieth Anniversary of the Park.
Posted by Scot Faulkner at 6:08 PM

Scott, you have no idea what you are talking about and this blog is just that- YOUR OPINION.

slander-
n. oral defamation, in which someone tells one or more persons an untruth about another, which untruth will harm the reputation of the person defamed. Slander is a civil wrong (tort) and can be the basis for a lawsuit.

Easy to cast stones when you are not identified.