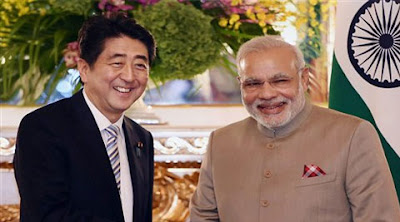 
Japan was the only country besides Bhutan to publicly back India during the 71-day India-China armed standoff at Doklam. Japanese Prime Minister Shinzo Abe visits India next week for the annual India-Japan Prime Ministerial Summit at a time when Prime Minister Narendra Modi’s stock has risen in the great power centres worldwide over his resolute handling of the standoff with China and his deft management of the complex relationship with Chinese President Xi Jinping. That the Doklam imbroglio could have led to a border war, which would have triggered the clauses for legal expropriation of all Chinese assets in India as per the Enemy Property Act 1968, appears to have been a key factor in cooling hotheads in the armed forces of China.


Japan itself faces a threat, which has the capacity of becoming existential. This is with Kim Jong-Un and his regime in Pyongyang. As Prime Minister Shinzo Abe grapples with the unending complications of the breathtakingly tense North Korean crisis—where Kim Jong-Un appears to reserve special venom for Japan, for historical reasons, and with missiles flying over the Japanese islands like ping pong balls— the people in the world’s third largest economy are jittery. Therefore, the strongly worded statements from India have been doubly reassuring. The Japanese side is convinced that India, a rising power, will stand for respect for international law and will not tolerate rogue actions, and the special relationship between the two Prime Ministers Modi and Abe ensures that. The recent Malabar naval exercises of the Navies of India, the United States and Japan have augmented that confidence in India as a strong and reliable partner of Japan.


Unbeknown to most Japanese is the North Korea-Pakistan axis of nuclear and missile proliferation, even from the time of Pakistani nuclear scientist A.Q. Khan. Some Indian scientists have privately opined that both North Korea and Pakistan could not have advanced so much in both nuclear and missile technologies without concrete scientific and technological help from China. North Korea undoubtedly has become the cause of the most severe migraine that Japan has had since the US started providing a security umbrella after the end of the Second World War 72 years ago. Thus, India—with its own historical links with North Korea through the “non-aligned movement”—breaking with tradition and condemning North Korea for its belligerence is definitely being paid close attention in Tokyo.


Beyond the national security angles, PM Abe along with PM Modi will lay the foundation stones of two flagship projects for mutual economic growth. First the Asia-Africa Growth Corridor, which will become the main pathway for Japanese-Indian “Make in India” products and components for export to the growing economies of Africa. It is also fitting that the inaugural events are being held in Gujarat, since it re-emphasises the historical links built by Kutchi traders with Zanzibar in Africa in the 18th and 19th centuries. Abe believes that the Indian diaspora, which is firmly rooted in important countries of South, West and East Africa are the key partners for local distribution, management of spares and servicing, and related work needed for Japanese investment to succeed.


The Japanese are not resident in Africa in most countries in any appreciable numbers, unlike the Chinese. Therefore, there is little risk of the Japanese somehow running by themselves the local operations in African nations of joint ventures and other co-produced products from India. Japan sees India as a good location to manufacture and export to Africa, the Middle-East and Central Asia. Indeed, the Maruti-Suzuki manufactured vehicles in India are exported to 125 countries, a genuine success story for the company, Suzuki, which was once on the verge of bankruptcy because of stiff competition from much larger rivals in Japan like Toyota, Honda and Nissan.


Another important and much-anticipated construction project is the “Shinkansen” bullet train between Ahmedabad and Mumbai. This rail mode has an enviable zero accident record, despite travelling at over 300 kilometres an hour in Japan. Indeed, beyond the bullet train, Japan-India collaboration on enhancing railway safety throughout the country is one of the topics under discussion. The average speed of Indian trains being about 50 kmph, at the Shinkansen speed, the journey from Mumbai to Ahmedabad would be cut to two hours from the current seven hours. However, the new route would require 11 new tunnels, including an undersea tunnel near Mumbai, and, therefore, the total Japanese concessional loan is approximately $12 billion at 0.1% interest, with a 50-year repayment period, as well as a moratorium on payments for the first 15 years, while the route and train construction, training and allied development work is undertaken and passenger journeys get underway. This is the most concessional of loans, at 0.1% interest, that Japan has ever given for commercial-scale projects. It is one of the payoffs of the increasingly close India-Japan multi-faceted relationship.


Both Modi and Abe, who are close friends, will have several rounds of discussions on geopolitical matters, as well as the India and Japan partnership being developed by the two PMs. The two countries have shared values in security stability, promotion of dialogue and engagement with strong legal ground, joint outreach to global market, where Indians are geo-politically strong, and technology collaboration for the new era of strong and sustained growth. The forthcoming Modi-Abe summit is expected by the Japanese side to be a path-breaker in ties between Tokyo and Delhi.


Dr Sunil Chacko, a graduate of Harvard, has been a faculty member in the US, Canada, India and Japan.
Posted by Scot Faulkner at 2:48 PM