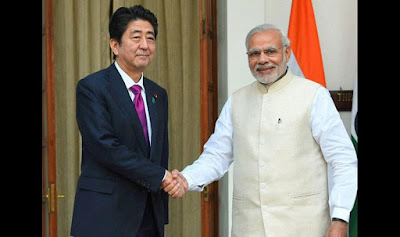 
The Prime Minister of Japan, Shinzo Abe visited India on 13 and 14 September 2017 for the annual India-Japan Prime Ministerial Summit. This visit was unique because his itinerary was entirely in Gujarat, opening the doors to similar such state-level visits by heads of government, reflecting India’s diverse States-Union tradition.

There was palpable excitement in Ahmedabad/Gandhinagar for the visit of Japan’s first couple, Shinzo and Akie Abe, as compared to the jaded disinterest that is common in Lutyens Delhi for the now-unending stream of dignitaries that come through the nation’s capital. Indeed, the next summit in India in 2019 could be in the southern states.


The highlights of the Abes’ interactions with the public were their marigold bedecked open-jeep greetings with Prime Minister Narendra Modi to throngs of excited Gujaratis lining the streets and the much-anticipated foundation stone laying ceremony for the Shinkansen Mumbai-Ahmedabad bullet train construction project, expected to be completed around 2022. The Abes too appeared to be energised by the warm reception they received, and PM Abe in his exuberance, declared “I really like India and I will do whatever I can do for India”. This is not insignificant, given that some in the leadership of another large economy in Asia, by comparison, appear to be taking frequent pot-shots at India.


The Joint Statement at the conclusion of the Prime Ministerial Summit calls for alignment of Japan’s Free and Open Indo-Pacific Strategy with India’s Act East Policy, including through enhancing maritime security cooperation, improving connectivity in the wider Indo-Pacific region, strengthening cooperation with ASEAN, and promoting discussions between strategists and experts of the two countries. It advances the need for partnerships for prosperity through India-Japan Investment Promotion, speedy implementation of key infrastructure projects, and advancing cooperation in the fields of energy, smart cities, information and communication technology, space, science and technology, bio-technology, pharmaceuticals and health.


Both India and Japan have a formidable number and range of human resources and expertise in sectors mentioned in the Joint Statement, however, one tall barrier could be the relative unfamiliarity with Japanese language in the past interactions among Indians and Japanese. Japanese language teaching in India was stressed in the Joint Statement, as was collaboration in the fields of tourism, civil aviation, higher education, women’s education, skills development and sports. For many Indians, who have grown up with multiple-languages and multi-cultural environment in a multi-religious-and-ethnic society, adding one more language to our portfolio may not be such a difficult task, especially if Japanese language skill is associated with in-coming skilled jobs with Make in India investment from Japan.


On the enhanced connectivity of Pacific-Indian Ocean, the two Prime Ministers plan to work together to enhance connectivity in India and with other countries in the Indo-Pacific region, including Africa. This includes the development of industrial corridors and industrial networks for the growth of Asia and Africa, which will benefit various stakeholders in the Indo-Pacific region, including Africa. They shared the desire to further promote cooperation and collaboration in Africa, just as companies like Maruti-Suzuki have been exporting to numerous African nations.


The Joint Statement also prescribes enhanced defense and security cooperation and dialogues, defense equipment and technology cooperation in such areas as surveillance and unmanned system technologies, and defense industry cooperation.


As is customary with joint statements, there is a litany of initiatives and programmes mentioned. However, little by way of analysis and evaluation. What has happened to various joint endeavours? Have they resulted in business going concerns or faded into oblivion? What can we learn from those experiences?


In a first, PM Abe and PM Modi stressed the importance of holding accountable all parties that have supported North Korea’s nuclear and missile programmes, a not-so-veiled reference to the widely suspected Pakistan and China, which have reportedly been overtly, covertly and unofficially supportive.


It is quite fascinating that Modi and Abe have returned to the theme of “Confluence of the Two Seas”, meaning the Pacific and Indian Oceans, which was the title of a 1655 book authored by the Mughal prince Dara Shikoh, who was the son and heir-apparent of Emperor Shah Jahan. Dara Shikoh assiduously sought understanding with different communities and religions. This book title was emphasised by Prime Minister Abe in his famous speech to Indian Parliament on 22 August 2007, during his first term in office. That Dara Shikoh was assassinated by his brother Aurangzeb, a despot, in order to seize power, is often not remembered. Thus, recollecting India’s history, PM Abe’s 2007 speech aimed at governance through peace and by extension peace through strength, would be an essential shared vision; not merely peace through good intentions and hope, and that is indeed the path that India and Japan have embarked on.


Dr Sunil Chacko, a graduate of Harvard, has been a faculty member in the US, Canada, India and Japan.
Posted by Scot Faulkner at 3:01 PM