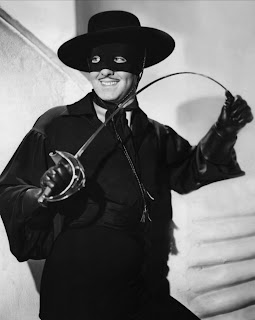 The Republican and conservative brands have been painted into a pop culture corner as being “un-cool” or worse. Democrats and liberals get to use Robin Hood and Santa Claus. The GOP is portrayed as the Grinch, Scrooge, Gordon Gekko, and other negative symbols of elitism, greed, racism, stupidity, and angry old white guys.

Sometimes conservatives relish being portrayed as bad guys. In 1980, some at the Reagan-Bush National Headquarters would give directions, “we are two blocks to the right of Attila’s” in reference to a local restaurant.

It is time for conservatives and Republicans to embrace a pop culture hero that embodies their core beliefs – Zorro!

In that 1940 movie, the rights of the people are oppressed by a greedy and corrupt government. Villainous government officials brutally enforce confiscatory taxes on everyone, including the church and the poor, in order to siphon unaccountable funds to their special interests. Dissent is crushed. Everything is regulated. Everyone’s property and privacy are at risk.

Enter Don Diego Vega, a child of privilege who takes on the secret identity of “Zorro” (the “fox”), to thwart the plots of corrupt officials, reclaim the taxes for the people, and ultimately bring liberty and justice back to all. Zorro does all this with great flair while winning the love of beautiful Lolita Quintero (Linda Darnell). He also makes the case for an armed populace, as the business elite join with poor farmers and townspeople to storm the fort and send the bad guys packing.

As Republicans and conservatives wrestle with how to reach the masses with their ideas (once they figure out what those are), they should consider embracing a fictional Hispanic hero whose actions speak volumes. Countless Zorro movies and a hit 1950’s television show http://en.wikipedia.org/wiki/Zorro_(1957_TV_series) create a pervasive pop culture icon that could rehabilitate a damaged brand.

Posted by Scot Faulkner at 8:37 PM