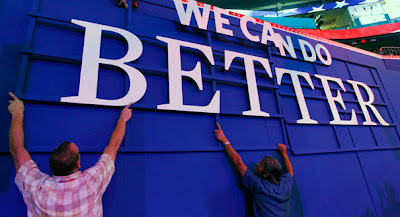 This was published in Politico
http://www.politico.com/story/2013/04/republicans-uncivil-war-89696.html

The Republican Party is at war with itself and it is losing. For every successful Republican governor, there are Republican state legislators who embrace personally oppressive and interventionist initiatives. For every reasonable Republican member of Congress there are more who embarrass. Every compelling soundbite from Republican candidates and pundits are overwhelmed by those that repel.

It wasn’t always this way. Republicans used to be known for ending wars not starting them. Eisenhower negotiated the end of the Korea War, Nixon ended the Vietnam War, and Reagan ended the Cold War. Republicans used to be known for competent management. Truman turned to Herbert Hoover to bring order to the chaos of the New Deal. Reagan established the Grace Commission to focus on government waste and reform, while launching the Baldrige Award to provide stellar examples of leadership, organizational effectiveness, and customer service to make America more competitive. In 1995, Republicans in Congress cleaned-up the scandal-ridden mess left by decades of institutionalized corruption.

Republicans were also once known for their emphasis on science, empiricism, and environmental responsibility. Teddy Roosevelt established parks and a national ethic for conservation. Nixon established the Environmental Protection Agency. Reagan led the way for private-public partnerships for historic preservation, notably the restoration of the Statue of Liberty. Eisenhower created the National Aeronautics and Space Administration and started planning the moon missions. Man landed on the Moon under Nixon and dominated space with shuttles under Reagan.

Americans rewarded these policies and actions. The Reagan Revolution dominated America in the 1980s with three consecutive landslides of 489, 525, and 426 electoral votes. There was talk of the Democrats’ demise. Then something went wrong for Republicans. Terribly wrong.

Politics is about prevailing. To prevail you have to garner enough support to overcome opposition and apathy. This requires actions and rhetoric that are reasonable and inspirational. Republicans have become terrible at both. Rather than listening to the American people, they are listening to their failed paid consultants and media echo chamber.

In the late 1980’s conservatives were pioneers in new media. The end of the “Fairness Doctrine” in 1987 opened the door for radio and TV stations offering political points of view. Rush Limbaugh’s show premiered in 1988 and ushered in “conservative talk radio.” The Fox News Channel launched in 1996. MSNBC shifted to the left as a counter. On the other hand, William F. Buckley’s “Firing Line” ended its 33-year reign in 1999. This shift created larger-than-life personalities that were more interested in self-promotion via hyperbole over rational discourse.

This tilt was a mixed blessing. “Firing Line” attracted approximately 32,000 viewers, but now Fox News dominates audience ratings, besting its nearest competition by 4-1 in viewers, while its personality driven shows blow-out their competitors by as much as 6-1. The conservative movement’s annual convocation, the Conservative Political Action Conference, went from a microscopic 200 attendees in the 1970’s to a major political event with over 10,000 participants being covered by all major news outlets.

While Buckley conservatives and Reagan Republicans attracted smaller real-time audiences, their ideas and discourse appealed to an ever-expanding universe across the political spectrum. On the other hand, the three million who regularly watch Bill O’Reilly and Sean Hannity and the upwards of 15 million who listen to Limbaugh each week, are content with their solid, but stagnant universe. Republican office holders and candidates have tailored their messages and thinking to this reality, as Bill Maher says, it’s “life in the bubble.” Unfortunately, 15 million fanatical fans are dwarfed by the 130 million people who voted in 2012. Yet Republicans seem ambivalent to expanding their domain.

Another phenomenon fed this myopic Republican universe. Pro-government Democrats entered the Republican Party in the late 1970s. NeoCons were Hubert Humphrey/Scoop Jackson Cold War Democrats who fled the dovish accommodation policies of George McGovern and Jimmy Carter to rally to Reagan’s victory over rather than coexistence with anti-communism. Around this same time the TheoCons arrived. These were a mix of pro-life Democrats and Southern Democrat evangelical Christians who felt betrayed by Carter. They helped Carter get elected in 1976, only to have him promote government policies that felt like a war against religion and family values.

At first the Republican Party welcomed these refugees. The NeoCons were Cold War soul-mates, while the TheoCons aligned with the libertarians in fighting intrusive left-wing policies and regulations. However, when Reagan left office, these two groups were no longer content to be junior members of a diverse coalition. These pro-government and pro-interventionist groups saw a weak and malleable leader in George H.W. Bush. The death of powerful Republican National Committee Chairman Lee Atwater left a power vacuum within the party. The Neos and Theos marched in and took over.

A new self-perpetuating political echo chamber was in place. The naturally exclusionary Neo and Theo factions drove out or silenced the broad Reagan coalition. They espoused big government ideas, a legacy of their Democratic Party roots, which alienated core Republican constituencies and trumpeted bible-based science and morality that drove off independents and blue collar Democrats.

Fox News and conservative talk radio were more than willing to be forums and advocates for this ascendant coalition. George W. Bush, and his political Svengali, Karl Rove, embraced the Neos and Theos to cobble together a narrow victory in 2000. In exchange, Bush was willing to fight their wars and move their policies, cheered on by the ersatz conservative echo chamber. The fact that these actions contradicted decades of Republican and conservative thought seemed irrelevant to all involved.

Bush 43 added his own straw to the political camel’s back by his willingness to allow cronyism to trump competence. By promoting amateurs to bungle the occupations of Afghanistan and Iraq and allowing the once noble Federal Emergency Management Agency, FEMA, to make an epic mess of Hurricane Katrina relief, Bush eviscerated the long-standing Republican reputation for management competency. The Republican echo chamber remained silent to this dismal record, violating another of their core principles – holding power accountable. A Republican world view, devoid of facts and critical thinking was taking hold. Like Thelma and Louise, Republican politicians and pundits alike grasped hands and floored the gas peddle into the abyss.

Except for some stellar governors, the Republican movement has been in free fall since late 2005. Like a cancer patient on remission, the tea party-fueled 2010 election blowout offered a fleeting and aberrant reversal of fortune. It remains to be seen if Republicans can heal themselves or whether the Democrats will over-reach clearing the way for a GOP comeback by default. Either way, America’s political landscape is denuded when rational thought and competence are edged out of the picture.

Scot Faulkner was Personnel Director for the Reagan-Bush campaign in 1980 and the Chief Administrative Officer of the U.S. House of Representatives. Jonathan Riehl, J.D., Ph.D., is a communications consultant for political campaigns and national nonprofit organizations and a former speechwriter for Luntz Research, and an instructor in Communications Studies.
Posted by Scot Faulkner at 12:35 PM