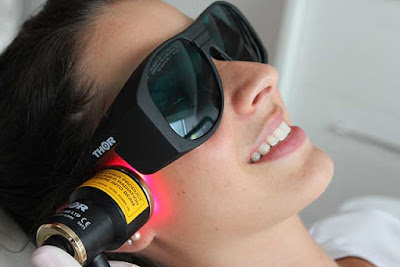 Imagine being successfully treated, painlessly and safely, for a wide range of diseases and conditions. Imagine having a cure for chronic pain.


This revolution in health and wellness is already available and will be celebrated on May 16 as the United Nations’ Annual International Day of Light.


In 1967, Endre Mester in Semmelweis University Budapest, Hungary conducted studies to determine if lasers caused cancer. He shaved the hair from the bodies of mice, divided them into two groups and gave a laser treatment with a low powered ruby laser to one group. They did not get cancer. Instead the hair on the treated group grew back more quickly than the untreated group. The concept of "laser biostimulation" was discovered.


Today, “biostimulation” is known as Photobiomodulation (PBM). It is the process where a specific range of the light spectrum at the right intensity, when directed to the body for the right period of time, can restore the function of stressed cells to normal healthy operation. It is non-invasive, non-toxic, and has no reported side effects.


There are over 32 trillion cells in the human body. Each cell has hundreds of microscopic factories called mitochondria which combine oxygen with nutrients from the blood stream to make the cellular energy called ATP. This energy is used to help the cell live and to conduct its various roles in our body: keeping the heart beating, the brain thinking, the body moving, and the all the other functions that keep us alive and healthy.


Mester’s discovery was an epiphany. If specific light band waves can help cells to regrow hair, can they wake-up cells to do other things? Now over five-hundred human clinical trials and 4,000 laboratory studies have shown the answer to be an overwhelming YES!


Chronic pain costs Americans over $635 billion a year in additional healthcare costs and lost productivity. PBM is used for recovery and endurance by champion athletes. At the 2016 Rio Olympics, many Nike sponsored athletes used a whole body PBM product called NovoTHOR to help them train, recover, and win more medals. This led NFL, MLB, NHL and NBA teams to add “light beds” to their training regime.


A growing number of doctors and public health officials are exploring PBM therapy as an alternative pain treatment to Opioids. This may help solve the addiction crisis facing America.


If PBM is so effective, why is not everywhere?


Outside of the U.S. it is. Australia, Canada, England, the European Union, and NATO all recognize PBM, promote its use, and accept insurance coverage. The Food and Drug Administration (FDA) is slowly moving towards regulatory clearances for PBM light equipment to officially treat diseases and conditions. Currently, the FDA labels PBM devices in the basic category of infrared or heat lamps.

Until the FDA moves forward, U.S. insurance companies, except for a few BCBS affiliates, refuse to reimburse for PBM treatments. They remain a solid wall of resistance.


The International Day of Light is an opportunity to alert everyone who could benefit from PBM therapy of its existence and promise. It is a time to ask public officials about ways to bring PBM into the mainstream of American healthcare. It is a time to ask your Doctor, Dentist, Veterinarian, and local gym/wellness center if they offer PBM therapy and if not, why not.


May 16 is an annual reminder that bringing light therapy into healthcare is long overdue.


It is up to all of us, for ourselves, our families, and our communities, to make the promise of light a reality.


[Scot Faulkner advises global organizations and universities on healthcare reform and innovation. He served as the Chief Administrative Officer of the U.S. House of Representatives. He also served on the White House Staff, and as an Executive Branch Appointee.]
Posted by Scot Faulkner at 12:10 PM