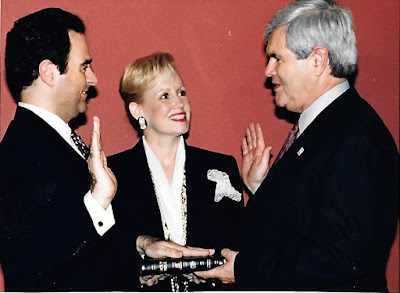 
Newt Gingrich is the most consequential Republican Speaker in history. He revitalized a failed Republican Party, forging the first GOP Congressional majority in forty years.


During his tenure, Gingrich revolutionized House operations, including bringing the Legislative Branch into compliance with all federal laws.


Republican Speakers have a rich history of shaping Congress. Two of the three House Office Buildings are named after Republican Speakers. Rep. Joseph Cannon (R-IL) remains the single most powerful Speaker in House history (1903-1911). Rep. Nicholas Longworth (R-OH) broke with Teddy Roosevelt to defend the Republican Party in the 1912 election and then broke with President Herbert Hoover to defend American taxpayers against the growth of big government (1925-1931).


Rep. Thomas Reed (R-ME) comes closest to Gingrich’s impact on the Legislative Branch. Reed was known for his communication ability, and his mastery of parliamentary procedure. As speaker (1889-1891/1895-1899) he mustered both of these skills to bring the House of Representatives back into alignment with the original rules written by Thomas Jefferson. Many consider his success assured the “survival of representative government”. [1]


Newt Gingrich was born and raised in Georgia. His early career as a professor of history and geography at the University of West Georgia well prepared him for the many times he would reference America’s founding principles during his political career.


In 1978, Gingrich became the first Republican to win Georgia's 6th Congressional District. Once in office, he learned parliamentary combat and the power of well-timed words from Rep. John Ashbrook and the conservatives of the Chesapeake Society. [2]


When many of Chesapeake conservatives followed President Reagan into the Executive Branch, Gingrich formed the “Conservative Opportunity Society” (COS). This became a rallying point for those wanting to make the House Republicans stand for something. [3]


COS members took the skills learned from Rep. John Ashbrook and the older conservative “street fighters” and added their own knowledge of using the media. Live coverage of House sessions had only been available to cable television audiences since March 1979 when CSPAN began to broadcast the House signal.


Through ingenious use of the one-minute speeches, that led the daily sessions, and the special orders, which ended the legislative day, Gingrich and the COS began to build a television audience. In the days before Rush Limbaugh and other conservative media personalities, the COS shows obtained a conservative “cult” following. The COS members became popular icons to a new generation of young conservative activists. Speaker O’Neill, in an attempt to humiliate the COS, ordered the House cameras to show the empty chamber that the COS was addressing late at night. This only added to the COS mystique as activists outside of Washington saw the empty chamber as a metaphor for COS members standing courageously alone against the powerful forces of big government.


In 1988, Gingrich launched an ethics complaint against then House Speaker Jim Wright (D-TX). He questioned the financial arrangements around Wright’s book, Reflections of a Public Man. Controversy swelled around Gingrich as Democrats attacked him for similar problems with his own 1977 book deal. Such attacks only added to Gingrich’s following among “grassroots” conservatives outside of Washington, DC.

The election of George Bush as president in 1988 led to a historic opportunity for Gingrich. Rep. Dick Cheney (R-WY) had been tapped to become Secretary of Defense. This happened in the wake of the unsuccessful confirmation fight for former Senator John Tower
(R-TX). With Cheney leaving the Minority Whip’s position in March 1989, the opportunity presented itself for a conservative insurgency against Michel’s candidate, Rep. Edward Madigan (R-IL).


Madigan had been the chief deputy minority whip and was viewed as the natural successor to Cheney. Republicans tended to reward people in turn and to shy away from insurgency candidates. This tradition of planned succession was symbolized by having conservative Rep. Tom Delay (R-TX) act as Madigan’s campaign manager against Gingrich.


On March 22, 1989, the tradition was shattered as Gingrich was elected by a two-vote margin. “The issue is not ideology; it’s active versus passive leadership,” said Rep. Weber. [4]

Gingrich immediately set about reshaping the opposition of the House. Along with the organizational resources of GOPAC, his personal political action committee, Gingrich built what became know as “Newtworld”. Joe Gaylord, Gingrich’s top lieutenant and then head of GOPAC, ran this interlocking structure behind the scenes. Dan Meyer moved from Gingrich’s personal office to head the Whip’s office. Tony Blankley, a veteran of the White House and active member of various conservative networks during the Reagan years, became the spokesman. A GOPAC consultant, John Morgan, an expert at tracking polls, began weekly assessments of how this new operation, and its aggressive strategy, were working.

The new organization moved the COS’s combative style to center stage. There were weekly “themes” for Members to focus on. This meant floor speeches backed up by fact sheets and talking points that Members could use back in their districts. An “echo-chamber” of opposition, linked to conservative grassroots groups, was becoming a machine. Its goal was to topple the Democrats in 1992 or ’94.


The elections of 1992 disappointed some House Republicans who had hoped for more voter outrage over the scandals of the 102nd Congress. The Republicans were left to ponder both their minority status in the House, and having to deal with a Democrat in the White House.

On December 7, 1992, the Republicans met to sort out their leadership in the 103rd Congress. Michel remained a declining figure among the insurgent House Republicans, but his popularity gave him another two years as minority leader. Gingrich would have to run his opposition effort as Minority Whip. However, Gingrich’s strategy of aggressive opposition received another major boost. Rep. Richard “Dick” Armey (R-TX) defeated Rep. Jerry Lewis (R-CA) for Chairman of the Republican Conference. Another moderate/nonconfrontationalist was defeated and another conservative in favor of total warfare with the House Democrats was elevated to a key leadership position. [5]


Bolstered at the top by Gingrich and Armey, and by Rep. Jim Nussle’s (R-IA) House Reform group - the “Gang of Seven”, the COS, the 103rd Congress witnessed daily exposes of Democrat scandals and malfeasance.


On September 27,1994, Gingrich launched the first “European-style” parliamentary election, by crafting the “Contract with America”. For the first time in American history, a party ran its Congressional candidates based on an inspirational and visionary manifesto.


The “Contract with America” ignited the Republican base, leading to a 54 seat swing propelling the Republicans into power for the first time since 1954.


As Speaker, Gingrich drove the House’s agenda to pass the major elements of the “Contract” within 100 days. This was accomplished. However, Senate inertia and President Clinton’s vetoes prevented most of the “Contract” from becoming law.


Two “Contract” items did become reality, and these changed the Legislative Branch forever. HR 1, the Congressional Accountability Act of 1995 was the first order of business and the first bill passed in the 104th Congress. For the first time, the Legislative Branch was required to comply with all the laws it had passed. True accountability was achieved as Members had to live under the same laws they had thrust onto Americans. [6]


The other action was creating the Office of the Chief Administrative Officer (CAO), which consolidated all non-parliamentary and non-security functions within one office. It’s mandate was to reinvent the operations of Congress to make it run like a business, while being completely transparent and accountable. This became the most comprehensive rethinking of Legislative Branch operations since the first Congress met in 1789. Obsolete functions were abolished, others were privatized.

Business practices were institutionalized by a team of corporate transformation experts, with the assistance of major accounting firms. Another team of computer experts implemented the “Cyber Congress”, which thrust House communications into the 21st Century in one giant leap. The result was a lean, customer-focused, accountable operation that saved $186 million and became the model for support services in 44 parliaments around the world. The reforms were so thorough and effective, that they remain in place to this day.

Gingrich’s policy and budget confrontations with President Bill Clinton defined the balance of his tenure. Government shutdowns and other brinksmanship forced reforms in welfare and taxes, and reduced the federal budget deficit.


Conservatives became concerned over Gingrich’s seeming loss of focus and the mounting attacks by Democrats. House Appropriators angered conservatives over being increasingly enamored with spending and earmarks. House “revolutionaries” tried to reverse things. On July 16, 1997 a small band of “true believers”, along with Delay and Armey, mounted a revolt against Gingrich. This ill-fated “palace coup” weakened both the plotters and the Speaker. [7]


In December 1998, after a disappointing showing in the November elections, Gingrich announced he would not seek re-election as Speaker and would resign from the House. [8]


The looming impeachment of Clinton over the Monica Lewinsky scandal further confused the situation. Rep. Bob Livingston (R-LA), the Chair of the Appropriations Committee and assumed to be the next Speaker, shocked the Chamber by resigning as his own extramarital affair became public. Amongst the chaos, Rep. Dennis Hastert (R-IL) became Speaker. [9]


Since leaving the House of Representatives, Gingrich remains an insightful commentator and provocative thinker. Returning the House to the rule of law, and being highly responsive to the will of the voter, remain lasting historic achievements that strengthened our democracy.


[1] A vivid chronicle of Reed’s battle for parliamentary integrity and accountability can be found in Barbara Tuchman’s, The Proud Tower. Ballantine Books, 1962; pages 125-130


[Scot Faulkner advises corporations and governments on how to save billions of dollars by achieving dramatic and sustainable cost reductions while improving operational and service excellence. He served as the Chief Administrative Officer of the U.S. House of Representatives. He also served on the White House Staff, and as an Executive Branch Appointee.]
Posted by Scot Faulkner at 7:51 AM