NO ONE IS ABOVE THE LAW 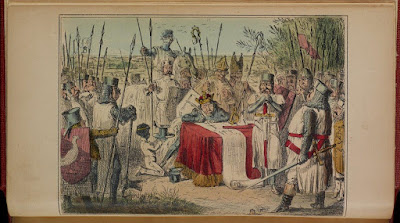 
Our U.S. Constitution (1787), and powers of the Legislative Branch, embody the distrust of concentrated power and establish mechanisms to hold that power in check. This concern for “sovereign over reach”, and the ways to prevent it, flow from the Charter or “Carta” signed on the field of Runnymeade in 1215.


On May 26, 1976, in a solemn ceremony at Westminster Hall in London, the leaders of the U.S. House of Representatives and Senate received a gold-embossed reproduction of the Magna Carta. On June 3, 1976, a second ceremony, in Washington, DC, installed the gold reproduction and the original Wyems copy of the Magna Carta in the Capitol Rotunda to celebrate America’s Bi-centennial.


While the original Magna Carta returned to England, the gold Magna Carta remains on permanent display in the Capitol. “Nothing could be more symbolically important to the people of the United States,” stated Speaker Carl Albert during the ceremony.


Why is the Magna Carta so firmly linked to America’s Legislative Branch? How are the underlying principles of the Magna Carta embodied in the operations of the Congress?


Winston Churchill, in his masterpiece, “A History of the English Speaking Peoples”, explained, “Throughout the document [Magna Carta] it is implied that here is a law which is above the King and which even he must not break. This reaffirmation of a supreme law and its expression in a general charter is the great work of Magna Carta; and this alone justifies the respect in which men have held it.”


England’s King John was humbled by barons at Runnymeade on June 15, 1215. The King had over reached as an aspiring despot. The barons had the military force, and the political will, to assert there were limits to even a King’s power. Magna Carta was the contract that re-established the rule of law and re-asserted certain rights for the ruling class. This included forbidding the King from compelling certain actions, and prevented him from imposing punishments and fines except through due process within narrowly defined cause.


England would expand upon these basic principles as Parliament gradually replaced the Monarchy in governing the nation. This process required a Civil War (1642-1647), the beheading of King Charles I (1649), and the deposing of King James II (1688).


America’s Revolution (1775-1781) and Declaration of Independence (1776) arose from a similar concern over King George III’s “sovereign over reach”.


Magna Carta’s revolutionary concept of holding the King accountable for a breach of contract with England’s nobles was broadened in the Declaration of Independence. Thomas Jefferson established rights above Common Law and Medieval precedents with the famous phrase, “We hold these truths to be self-evident, that all Men are created equal, that they are endowed by their Creator with certain unalienable Rights.”


“It has been several times truly remarked that bills of rights are, in their origin, stipulations between kings and their subjects, abridgements of prerogative in favor of privilege, reservations of rights not surrendered to the prince. Such was MAGNA CARTA, obtained by the barons, sword in hand, from King John...Here [in America], in strictness, the people surrender nothing; and as they retain everything they have no need of particular reservations. “WE, THE PEOPLE of the United States, to secure the blessings of liberty to ourselves and our posterity, do ordain and establish this Constitution for the United States of America.” Here is a better recognition of popular rights.”


The U.S. Constitution builds upon centuries of Parliamentary precedent by placing the power of legislation, and the funding of government operations, clearly in the hands of the Legislative Branch. This is why Article I begins, “All legislative Power herein granted shall be vested in a Congress of the United States...”


Section. 4. The President, Vice President and all Civil Officers of the United States, shall be removed from Office on Impeachment for and Conviction of, Treason, Bribery, or other high Crimes and Misdemeanors.


From the very first, the Legislative Branch asserted its role in limiting Executive Power. Senators quickly and effectively embraced the limitation of the President to appoint only with the “the Advice and Consent of the Senate” (Article II, Section 2).


The first test was rejecting President George Washington’s appointment of Benjamin Fishbourn to be a customs collector. On August 5, 1789, President Washington strode unannounced into Federal Hall in New York City, then the Capitol Building. Vice President John Adams allowed Washington to sit in the presiding officer’s chair. The President, according to Ron Chernow’s definitive biography on Washington, “proceeded to unbraid the twenty-two members of the Senate, demanding to know why they spurned his appointee.”


Senator Ralph Izard of South Carolina spoke for the institution asserting that “the Senate had no obligation to explain its reasoning to the President”. It was the last time Washington, or any other President, entered a Legislative Chamber without permission.


Battles over appointees, spending, and legislation have defined the balance of power between the Congress and the President. In each encounter, Congress has ultimately reaffirmed its power to limit “sovereign over reach”. This has included censuring President Andrew Jackson (1834) and impeaching Presidents Andrew Johnson (1868), Richard Nixon (1974), and Bill Clinton (1998-1999).


The “Lincolnia” original of the Magna Carta was displayed at the New York World’s Fair in 1939. It remained safe in America during World War II, even being stored in the vault of Fort Knox after the Pearl Harbor attack.


[Scot Faulkner advises corporations and governments on how to save billions of dollars by achieving dramatic and sustainable cost reductions while improving operational and service excellence. He served as the Chief Administrative Officer of the U.S. House of Representatives. He also served on the White House Staff, and as an Executive Branch Appointee.]
Posted by Scot Faulkner at 11:26 AM