HOW HILLARY MAY WIN 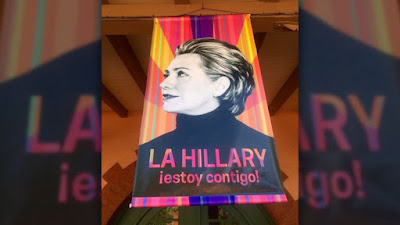 Is our choice really between a crook and a madman?

Evidence mounts that Clinton is not only corrupt, but is an inept and mediocre campaigner.  She also contorts over the internal contradiction of being Obama’s third term, while calling for change.

Why is Hillary winning?

First and foremost, she is being carried across the finish line by 95% of the national media.  The liberal media is pushing applications of hypocrisy into fantastical territory. Anything Hillary or Obama does outside the immediate news cycle is deemed “old news”.  Anything Trump did since puberty is deemed relevant.

This hypocrisy was on full display during the National Conventions.  Grieving Republican mother Patricia Smith, whose son’s death can be linked to Hillary, was dismissed and ignored.  Grieving Democrat father Khizr Khan, whose son’s death happened twelve years ago and had nothing to do with Trump, became a media star and the main evidence for declaring Trump unfit to be President. Khan’s links to the Clintons are still drowned out by the media.

The liberal media also threw body blocks to protect Hillary and Democrats.  Imagine what the media would have done had the Republican Chairman resigned the day before the GOP Convention; Republican emails disclosed unseemly cynicism, derisive name calling of minorities, and a conspiracy to rig the system against candidates; and four top Party officials were forced to resign.  Standard operating procedure is for the media to divert attention from these real issues to fairy tales of a treasonous liaison between Trump and Russian President Putin.

The small community of conservative oriented media has tried to counter this bias.  However, they, like their Establishment Republican colleagues, have forgotten how to fight.  Friends in the conservative media privately shared stories on how the Democrats fabricated everything at the Philadelphia convention.  They documented the Democrats’ scramble for American flags, stripping hotels from thirty miles away and having to tape scraps of paper to the bases to keep track of their ownership.  They chronicled the walk out of over a thousand Sander’s supporters, the hiring of movie extras to fill seats, the thuggery and intimidation of convention security, the trashing of the small American flags after the performance, and the installation of sound generators to create enthusiasm that was not really there.  Little of this made the news.  There was little interest in probing below the surface of Hillary’s artfully crafted fraud.

As August unfolds, the media shows tightly framed shots of both Hillary and Trump rallies.  This creates a false equivalency when other photos of these same events show Hillary speaking to near empty halls and Trump attracting overflow crowds.

Republican disarray is on full view this election cycle.  Their Washington-based elite are apoplectic that Trump might actually end crony capitalism and shut down their lucrative scams.  They are willing to risk Hillary packing the Supreme Court for generations to preserve their revenue stream.

Trump appeals to a spectrum of voters who are seething at the incestuous corruption permeating America’s governing elite.  The media is doing all it can to divert attention from this fundamental upheaval in the body politic.  For every Republican who defends Trump there are others conducting outright political treason.  Years of shadow boxing with Obama, and killing the Republican cause, have stripped the “Never Trumpers” of any right to invoke ideological purity.  Unfortunately, the other reason Trump’s message is being disrupted is Trump himself.

Donald Trump built his empire and reputation in the rough and tumble world of New York City real estate development.  Trump mastered sparring with NYC tabloids. He now needs to realize that a larger audience requires different ways to promote his cause. Trump needs to ignore side issues and focus on two things: indicting Hillary/Obama and shaping a more detailed and relatable vision for “Trumpism”.

This election is ultimately about “message discipline”.  Hillary and her media allies have woven a tapestry made of “whole cloth”, which will unravel the moment anyone actually examines it.  Trump remains a scattergram tapping into deep concerns held by a majority of Americans. For Trump to overcome media bias and Republican dysfunction/disloyalty he needs to fixate on his goal – toppling the corrupt establishment.