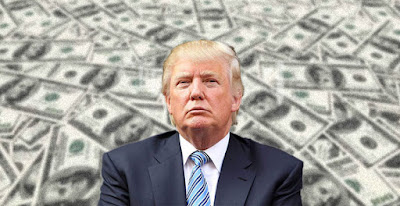 It is time for Trump to do what he does best – expose how the Washington, DC Establishment lies its way to expanding government and helping its cronies.

Donald Trump has an historic opportunity to reframe and reset the budget battles that have plagued Washington, DC for years.

Members of Congress, when they return after their longest summer break in over fifty years, will be teetering on a chasm of their own making.  They will have only seventeen legislative days to pass twelve Appropriation bills.  Only a handful cleared the House prior to its long recess and none were considered in the Senate.  This guarantees much “sound and fury” ending in an Omnibus Appropriations bill, with several continuing resolutions to avoid a government shutdown.

Posturing by the Congress, the White House, candidates, and the media will reach fever pitch around the time of the first Presidential Debate on September 26.

First, reveal how $2.405 trillion is just laying around doing nothing.

Since President Obama took office, $914.8 billion in unexpended, unobligated, funds have piled up across the federal government. Obama never conducted the “budget sweeps” done by all his predecessors. The details are reported under “Assets and Balance Sheets” on page ten of the Office of Management and Budget (OMB) budget.

Another $1.028 trillion remains unexpended among general accounts and $461 billion remains unspent in trust funds.  While these funds are technically obligated, the fact that they have languished for years raises questions about their use and their management.

Second, reveal the red herring of entitlements.  Everyone knows that the only way to truly stop massive federal spending and debt is to reform entitlements.  The trap is that the required radical reform will not happen anytime soon.  It is like asking an overweight “couch potato” to suddenly jump up and win the Olympics’ Marathon.  No one in Congress, the Executive Branch, or the multitude of stakeholders is ready or willing to make entitlement reform happen.

The alternative is to prepare for tackling entitlements by first working on those budget issues that are long overdue.  This should appeal to anyone not lining their, and their cronies, pockets with federal favors.

The first move is slamming the door shut on filling federal vacancies.  This would cut $350 billion a year in personnel costs. This freeze would take advantage of Executive Branch attrition of 60,000+ employees a year through retirements and voluntary departures. Each agency head could submit waivers to OMB for those jobs they consider essential for their missions.

Not every retired government worker needs to be replaced. In fact, the Defense Department has already begun to leverage selective hiring freezes for a five year “delayering” initiative to eliminate 1,260 positions and save $1.9 billion over five years.  Even under Obama, officials admit not every layer of management (up to 23 layers in some agencies) is needed. Just think how much they could save if they were sincere.

The second way to immediate fiscal sanity is to cut $650 billion in government waste.  Every year, the General Accountability Office (GAO) and 73 Inspector General Offices find over $650 billion in ongoing waste. This waste is documented in 768 GAO reports containing hundreds of recommendations for operational improvement, and 8,760 audits and investigations conducted by the 73 Inspector General Offices among the Cabinet departments and independent agencies of the Executive Branch.

That translates into $6.5 trillion in possible spending cuts or cost avoidance, over the next ten years, without harming one legitimate beneficiary of government services. Unfortunately, these findings and recommendations are regularly ignored by the Washington Establishment.

Congress, the Executive Branch, and the media are ignoring 9,528 ways to cut government waste every year.

Trump can make the professionals at the GAO and Inspector General offices “rock stars”.  He can look into the camera and say, “No matter how liberal or how conservative you are – you want the government to stop wasting your money.”

These could be the first steps in shaping Trump’s management revolution as President. They are all bi-partisan issues.  Trump can then build upon these successes to solve the more divisive issue of entitlement reform.

Exposing the truth, and saving billions of dollars, “what do you have to lose?”