Ethics in the 21st Century 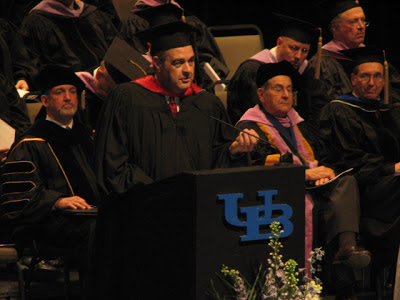 This day is about you and your loved ones, not about ceremonies or speeches.


However, in these minutes before you receive your diplomas I would like to offer a few words to help guide you into the future.

Commencements are about optimism. You are beginning your adult lives. Your futures are full of hope and opportunities.

But the world you are about to step into is still reeling from an historic meltdown.

I am not just talking about the economy.

The world is suffering from an ethical meltdown that took us over the financial cliff in the first place.

Unethical behavior and misconduct is as old as humankind, but years ago this always seemed to be balanced out by strong and moral leadership in all sectors.

After the fall of the Berlin Wall, America and the world began to lose their way. The last twenty years has seen a growing trend of weaker leaders in all sectors. In America, we suffered through Presidents Bush and Clinton who were seemingly incapable of honesty and integrity. We watched as the Republicans took over Congress in 1994 promising to end the abuses of the Democrats only to create their own kleptocracy. Last year America decisively ended the Republican era hoping for a new start in a new century.

Unfortunately, the “change we can believe in” has not occurred. Examples are all around us –

• This week the Chairman of the New York Federal Reserve Bank resigned because of questionable stock manipulations.

• In the past few weeks the FBI probed deeper into the sordid business dealings of Representatives Murtha and Rangel.

• A steady stream of Governors, Mayors, and local officials continue to be investigated, indicted, and convicted.

• Every day there are reports on how billions of dollars in TARP money is wasted or diverted.

• There are also daily reports on how, even with a different political party in charge of our government – waste, fraud, and abuse continues.

This ethical meltdown is not just in our government -

• Just this week LA Dodger Manny Ramirez was suspended because of drug use.

• All this year we watched as auto, banking, and insurance executives destroyed their companies, asked for bailouts, and then stuffed their own pockets with bonuses and perks.

• We have watched Stew Parnell, the CEO of the Peanut Company of America, knowingly allow tainted food to enter our stores and kill eight people.

• We watch as brutal dictators in the Sudan and Zimbabwe are welcomed at international conferences while their people are starved and killed.

• We have also watched as our public officials pound the table and play to the cameras, yet take no real action to either punish or prevent.

Where are today’s roles models? Are there any real leaders left?

“This crisis is neither the result of a normal turn of the business cycle nor an accident of history. We arrived at this point as a result of an era of profound irresponsibility that engulfed both private and public institutions from some of our largest companies’ executive suites to the seats of power in Washington, D.C. “

Thankfully, in the midst of this “profound irresponsibility” there are some who followed a better path.

There are companies that did not collapse in the financial meltdown.

These companies remain the foundation of our economy and continue giving capitalism and America a good name. They remain successful because they understand the importance of their reputation. Their sole focus, on a daily basis, is creating products people can trust.

Hershey Foods has provided the world with candy since 1903. I was lucky enough to lead a four-year consulting engagement among their seventeen plants. The aroma therapy alone was worth it.

The greatest difference between Hershey Foods and the Peanut Company of America is Hershey’s obsession with ethics. Every Hershey plant is like an echo chamber of reminders that Hershey products are consumed by children and that every Hershey employee should make candy as if they were taking it home to their own families.

The Hershey culture is one of the most positive and uplifting of any corporate culture I have ever encountered. Every employee knows that their every action builds customer trust and loyalty in their products and the Hershey brand.

Half-way around the world, workers in the city of Dubai are also making ethics a way of life. Dubai is one of the most amazing cities on earth. It is like San Francisco at the height of the gold rush. People from every nationality, culture, and religion are pouring in to make their fortunes. The cutting edge of architecture, transportation, and technology are showcased on every corner of the fastest growing city on earth.

At the heart of Dubai’s success is its reputation for safety, honesty, and security.

Dubai’s leaders know that their oil runs out in 2015 and their future depends on reinventing the city as a vibrant business and tourist destination. Dubai sits less than 100 miles from the Iranian coast. Every employee, every policeman, every customs officer, and port security guard know that just one kidnapping, one car bomb, one bribe, or one smuggled gun will erase Dubai’s reputation and end its dream.

I have spent several years advising executives in Dubai. They are focused, like laser beams, on the importance of their reputation. They know that every action is an ethical test they must pass. There is no alternative to earning trust on a daily basis.

That is what should guide our own interactions with customers and colleagues.

Think of it this way - Every one of us manages a personal reputation bank. We make deposits when we consistently meet the needs of our customers, clients, or patients. We earn interest when we collaborate with members of our practice and partner with our patients to achieve life-long health. We expand our capabilities when we recognize and value the input of everyone on our team, including administrative staff.

Our reputation bank can remain healthy and profitable for our entire lives, but only if we understand the lessons of Hershey and Dubai. At the heart of every successful organization, government, or person, is an ethical culture.

Ethics is not just something you should embrace because it is a “good thing”. For successful companies, Ethics is a business imperative.

Alternately, Ethical lapses break the connection with your customers and colleagues. Not honoring commitments, arbitrary actions, shoddy workmanship, all destroy the bonds of trust. Trust, once violated, is almost impossible to rebuild.

Erosion of trust then drains deposits and profits from your reputation bank.

When ethical lapses become a dominant pattern, grow harmful, or allow lying, cheating, and stealing - there will be a run on your reputation bank.

The world is littered with empty reputation banks – just look at carcasses of Enron, Lehman Brothers, and Arthur Andersen. In each case - executives thought they could game the system and outsmart reality, but reality always wins.

Violations of ethics are like twittering, texting, or posting on Facebook – you can delete, but you can’t erase. You may remove the immediate evidence, but the reality of your actions never goes away.

You, your family, and your colleagues can live an ethical life – but how do we reverse the decline in our civic culture? Power does corrupt – and every day politicians find creative new ways to line their pockets.

Twelve years ago Jefferson County, West Virginia was a very corrupt county in a very corrupt state. Most public officials earned income both above and under the table. Republicans and Democrats equally shared in graft and malfeasance.

In 1998, a small group of civic activists, including my wife and me, decided to make a difference. We first identified core values for an ethical community – the rule of law, transparency, citizen involvement, honesty, and pride in what made the community unique. We used the internet to network among caring citizens. We recruited candidates – even running want ads in the local newspapers.

Today, the Jefferson reform movement runs the county government, the school board, and three of the five towns. Nearly half of all Jefferson County voters are linked and mobilized through email, blogs, online forums, and social networks.

Successful political reform can transcend partisanship – you just have to embrace the core values of democracy and work for change at the local level. That is where small actions can have the most impact. During your lives, think about doing something beyond yourselves by strengthening both your local community, and your professional community.

There are role models that span the political spectrum. Ronald Reagan’s motto was “It can be done”, Barack Obama’s is “Yes we can”.

After the ceremony and the parties, make a pledge to yourself to use Ethics as a moral compass to guide you through life. It will well serve you, your loved ones, your colleagues, and your patients both next week and fifty years from now.

Thank you and good luck!