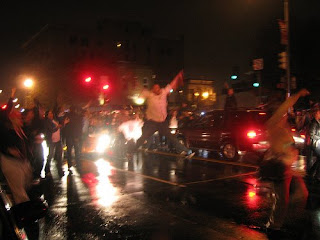 I will always remember the horns. Washington, DC sounded like downtown Cairo with its deafening cacophony of automobile horns.

I was driving along 14th Street and then onto K Street, traveling home after seven hours of broadcasting at the Voice of America. Exuberant people were everywhere, on the sidewalks, in the middle of the street, in doorways. All were chanting “Obama! Obama!” and waving Obama signs, posters, and hand lettered Obama bed sheets. Federal Protective Service guards at the Reagan Building were smiling and waving back at the lines of honking cars. DC policemen were smiling and waving from each intersection. One would have thought the Washington Redskins had just won the Super Bowl by sixty points.

The cheering for Obama’s brilliant victory will echo throughout his Presidential transition and again spill into the streets during his Inaugural. At some point, the serious business of whom Obama selects for his Administration and how he begins to dig America out of two wars and a major recession will supplant the festivities. In the meantime, Obama’s supporters deserve their celebration.

The Republican Party has suffered similar defeats in the past. Bill Clinton trounced incumbent George H.W. Bush by 370 electoral votes in 1992 and then beat Bob Dole by 379 electoral votes in 1996. People forget that the only close elections in our lifetime were George W. Bush’s, Jimmy Carter’s, and John F. Kennedy’s. You then have to travel back to 1884 for the next close race.

The Republican finger pointing and fratricide began, even as the votes were being tallied. Acolytes for Romney and Huckabee were already blaming Palin. Bush people were blaming McCain. Conservatives were blaming Bush or minimizing the loss as an aberration rising out of the financial crisis. Before things get any further out of hand there are some things to keep in mind as the Republicans seek a way back to the halls of power.

First, the Republicans deserved to lose. They had morphed into a sad vivisected version of themselves. There was very little said or done by President Bush, his administration, or the Republicans in Congress, that would not have ignited a conservative firestorm had any of it been done by a Democrat. Yet the movement was mostly silent.

The Republicans ran out of ideas and began losing their way in the spring of 1995. They had a brilliant game plan to win the 1994 election and ram through the “Contract with America” in record time. But they had nothing after that. Only President Clinton’s “zipper problems” gave them the opportunity to consolidate power in 2000. Then the tragedy of September 11 placed America in a war culture through 2004. During this time the Republicans undermined personal liberties, pursued ill-advised foreign adventures, and financially drove America off a cliff with spending, debt, and incompetent administration.

The devastating 2006 election should have been a wake-up call. It was not. Widespread denial reigned in the conservative and Republican salons of Washington. What was worse, many people who should have known better continued to drink the Bush “Kool-Aid”, offering up ever more preposterous explanations for why things were going off the rails.

· Throw-out Bush and everyone associated with him. Every office-holder who enjoyed taxpayer wages and the power-trips of office should be banished from think tanks, universities, and media forums. Their hubris destroyed the Republican and Conservative brands and almost eradicated a 300-year-old movement.

· Throw-out every Republican leader who voted for ridiculously large budgets, who trampled on our freedoms, or refused to conduct oversight and hold the Bush Administration accountable for its many failings. They reneged on their most fundamental duties to our country.

· Refuse to listen to anyone who was a Bush apologist. This means most of the cartoonish pundits on Fox, CNN, and MSNBC who refused to utter a single syllable of criticism during the last eight years. Many of them, including Karl Rove, have already begun revisionism to avoid retribution for their roles in the current mess.

Many of these “Bushies” are already repositioning themselves to become players in the Republican resurrection. It would be as if Benedict Arnold popped-up the Constitutional Convention offering to write a section or two.

Actions should have consequences. Those who were silent now say they did it out of loyalty. Their inaction was, in fact, the worst treachery of all.
Posted by Scot Faulkner at 8:17 PM