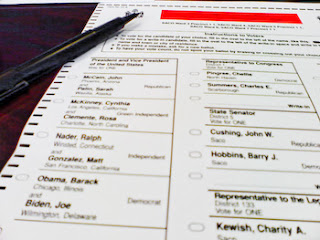 Voters are already streaming to the polls taking advantage of early voting. The airwaves are filled with wall-to-wall election coverage. There have been more polling in the last four weeks than during the entire 2004 election cycle.

This is an important election. Eight years of President Bush’s warped version of Republicanism has left a nation ready for something different. Even if that difference may turn out to be mostly rhetorical. The economic downturn has extinguished McCain’s last hopes for an upset by further undermining the damaged Republican brand. However, the high undecided percentage means there large numbers of voters either not willing to vote for a black man to be President or are uncomfortable voting for someone with so little experience. The mainstream media’s obsessive Obama boosterism has deprived Americans of a serious review of Obama’s leadership skills and his true agenda once in office.

The desire for change, the hope for economic salvation, and the emotions surrounding Obama (pro and con) are generating a huge early vote and will probably drive voter turnout up to pre-Watergate levels. One thing all voters need to remember is that the Presidency is only one selection on their long general election ballots.

A President is our national symbol. Their tenure defines an era in our nation’s history. But, on a daily basis, their actions and inaction do not directly impact our daily lives as fundamentally as the obscure officials populating the “bottom” of the ballot. Unfortunately, many voters do not even bother to vote for these local candidates. There is as much as a forty-percent voter fall-off or “under vote” for these races.

In many ways local elections are more important than national elections. State and local government tax you the most (income taxes, property taxes, sales taxes, and user charges). Local government controls who teaches your children and what they are taught, it responds to police, fire, and emergency calls, it picks up your trash, maintains your roads, and in many locales provides sewer and water services. These are far more fundamental to our daily lives than most national legislation.

Since local races are decided with far less votes, your vote can be decisive. Local officials are also far more accessible as elected officials because they remain in your community - you can bump into them at the store and still call them at home.

So, before Election Day, take the time to learn about your local candidates. There will usually be a neighbor or friend who is a local activist closely following these races and will gladly provide insight as to who will best serve the community. On Election Day, take the time to complete the entire ballot. Please do more than vote straight ticket. At the local level partisan affiliation is mostly irrelevant. As a life-long Republican, I have voted for as many Democratic as Republican candidates at the state and local level. Our democracy will be stronger and our communities better if we all follow the old adage "think globally - act locally".
Posted by Scot Faulkner at 3:30 PM