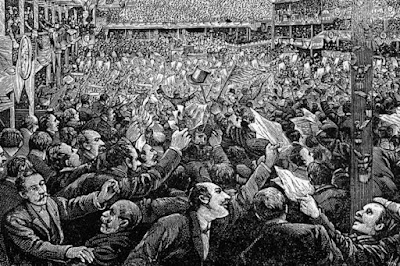 I can’t help but to think about the Democrat Convention this summer. I might be wrong but I believe that there has been another paradigm shift in the electorate. I predicted one before, and I’m predicting another one now: the candidate of choice is going to be based on emotions, feelings and about who can beat Trump – but not qualifications.

I predicted in an earlier writing that neither Biden nor Sanders would get the nomination. This was based on Biden’s performance and Sanders – always the bridesmaid with his socialist programs. Further, I predicted that two women may head the ticket. While this may still come to pass (I believe that Elizabeth Warren will lose consideration because of her untruthfulness), I’m going to propose a different scenario for consideration: a brokered convention. While this hasn’t happened in either party since 1952 and despite all of the rewrite of the rules, the Democrat party may have no choice but to wrest its way through one this summer. The hatred of Trump is overwhelming.

The old monkey wrench seems to be the Democrat establishment; despite the popularity of Bernie, they do not feel his progressive socialism will win the hearts and minds of the people – therefore, he’s got to go. And poor old Joe, he’s caught up in a maelstrom of family problems and political gaffes. Plus: “Here’s something ‘everybody knows' that is almost certainly true. The two most widely respected figures in the Democratic Party — Barack Obama and Nancy Pelosi — are worried that a Sanders nomination could be disastrous for the party in the fall, increasing the likelihood that Trump is reelected or that enough marginal House Democrats lose their seats to turn congressional control back to the GOP. Of course, the reason an outsider like Trump took over the Republican Party is the same reason a socialist like Sanders might take over the Democratic Party: Party leaders simply do not wield the same levers of power in an era of online ideological movements. But that doesn’t mean they have no leverage.” https://www.politico.com/news/2020/02/25/why-bernie-sanders-might-not-lock-democratic-nomination-117339

“Imagine that Sanders comes into the convention with a weak plurality, far short of 1,991 delegates. When he asserts that the candidate with the most delegates should be awarded the delegation, and rails against the establishment, he is confronted with his comments from 2016 like this one.

“His brand is suddenly tarnished – he looks like every other self-serving politician.” (Ibid) Oops! So, everybody has to consider what other likely strategies could come from this.

Remember: this is an emotional election and not a qualification election. So, qualifications aside what would be the most popular ticket (it is evident that one candidate alone is not going to shift this).


In a previous article that I wrote, I predicted that Michelle Obama would run for the presidency in 2024 – and that the interim time period would be spent grooming her for that event. What if the establishment proposed a ticket that had her as the vice president and the next most eligible candidate at this time for president? Bloomberg and Obama? Or how about Buttigieg and Obama?

Even more outrageous – despite her record – could be Hillary Clinton and Michelle Obama be the most reasonable compromise at this time? I believe that any ticket like this basically decided by the superdelegates could possibly cause Trump a problem especially if it were presented with an outstanding cabinet of people – perhaps, those no-Trumpers that have recently received the boot from the Trump administration.

This action by the establishment would obviously all but destroy the Democrat party. It would be a political calculation of how many of Bernie’s people would leave the party and how many would rejoin the party because of the excitement generated with this ticket. I have not seen any polls that have attempted to project these numbers – either coming or going. But over the long run, if the strategy were successful, I think the Democrat party would heal very quickly. I’m sure as part of this deal, all horse-trading aside, Bernie would be taken care of with some type of a political plum and indebtedness from the party leaders for his part in taking down Trump – however indirectly this may have occurred.
Now to return to the part about this being an emotional election. The Democrat party is going to have a hard time dislodging an incumbent president whose accomplishments and current popularity are so high.
“Americans are more positive about the state of the nation than they have been in over a decade, and Trump and the GOP appear to be benefiting. Still, in this era of extreme party polarization, that puts his approval rating at 49%, as Republicans' already high ratings have risen further while Democrats' negative opinions of him aren't budging. Independents' ratings of Trump have improved, but they are still more likely to disapprove than approve of the job he is doing.
“The significance of the trend is clear. An approval rating near 50% greatly increases Trump's chances of being re-elected, a prospect that seemed unlikely with his approval stuck near 40% for most of his term.” https://news.gallup.com/poll/286280/trump-job-approval-steady.aspx
There was one other poll taken recently that maybe speaks volumes to Trump’s reelection prospects: “New High of 90% of Americans Satisfied With Personal Life” https://news.gallup.com/poll/284285/new-high-americans-satisfied-personal-life.aspx When you examine the individual cohorts of this poll, the Democrat party faces a daunting task indeed!
This will be an interesting election to see which matters most to the American people: emotions or results!