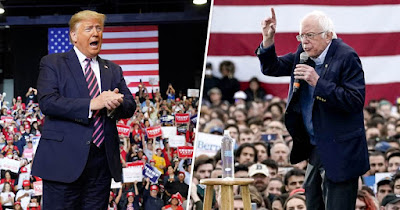 Senator Bernie Sanders’ rise to front runner for the Democratic Party’s nomination should be welcomed. The underlying cause of his ascendancy is very similar to Trump’s.  It represents a bipartisan rebellion against the elites and is healthy for America.


Since Franklin Roosevelt’s New Deal expansion of government in the 1930’s there has been an entrenched elite that runs America.  The bureaucrats in Washington, DC make common cause with crony capitalist lobbyists and pliable Members and staff in the Legislative Branch.  Together with their media allies, they have relentlessly thwarted the will of the people.  Government has expanded, waste of tax dollars has gone unchecked, and breaching our privacy is now commonplace.


The denizens of the “Swamp” and “Deep State” have become rich and arrogant.  They have banked on the complexity and longevity of their schemes to bewilder and intimidate those unlucky enough to exist outside their circles of power. Their defense systems have been perfected to absorb and neutralize even the most assertive reformers.


The Swamp/Deep State players depend on both Democrats and Republicans to nominate Presidents who are either already loyal to the status quo or, after winning with reformist rhetoric, revert to passivity.  This has been a reliable strategy for generations.


The Swamp/Deep State have had shocks as the grassroots can stir and surprise.  Ronald Reagan’s election in 1980 was built upon a conservative movement that arose in the 1940s.  The elites had dismissed conservatives for years and viewed them like a newly discovered Amazon tribe when they took the Presidency and Senate.  The Reagan Revolution overturned the common wisdom that the Soviets would never be defeated, and that big government would forever expand.  It took 12 years of the Bush dynasty to dilute Reagan’s achievements.


The Gingrich Revolution became another shock to the power elites.  They never saw the ground swell against the Congressional Kleptocracy that burst out of the ballot boxes in November 1994.  The Congressional breakthrough was short-lived.  By 2006, exploiting earmarks and the lobbyist revolving door stemmed the reformist tide.


While the elites celebrated their triumphs, Americans grew restive.


Commentators across the political spectrum denounced both movements as “AstroTurf” – fake grass roots.  Both movements were accused of being funded and organized by nefarious forces.  Their motives were assailed.  According to the elites, the Tea Party was racist and OWS was communist.  Everyone within the political elites, conservative/liberal, Republican/Democrat, studiously avoided linking the growing dissatisfaction with the status quo as the unifying theme of these two populist protest movements.


Populism defined Andrew Jackson’s victory in 1828.  He tapped the concerns of western settlers who were tired of Eastern elites dominating the White House.   It arose again in the1890s as farmers felt unaccountable moneyed interests were exploiting and ignoring them.  Donald Trump tapped similar sentiments as he shocked the status quo in first winning the Republican nomination against heavily favored establishment candidates and then toppling Hillary Clinton, the anointed one, in November 2016.


It is no surprise that rallying the disaffection on the right would inspire a candidate to tap the disaffection on the left.  Sanders rise scares the establishment, just like Trump.  Sanders has assailed the Democratic National Committee for aiding the elites, just like they did in 2016.  He has called out the media for unfair treatment.  His legions of supporters are filling auditoriums. His is a real movement.


Americans should look forward to a Trump-Sanders race.  There have only been a few times in our lifetime when two candidates offered stark and fundamentally different futures for our country.  It will be a clarifying moment, awarding the winner a crystal-clear mandate to boldly act.  Only Johnson-Goldwater 1964, McGovern-Nixon 1972, Carter-Reagan 1980, and Mondale-Reagan 1984 have provided such opportunities.


Americans should rejoice that a Trump-Sanders general election campaign would be the first time since Davis-Coolidge in 1924 to shut out the elites across the political spectrum.

Posted by Scot Faulkner at 1:40 PM