SHAPE OF THINGS TO COME 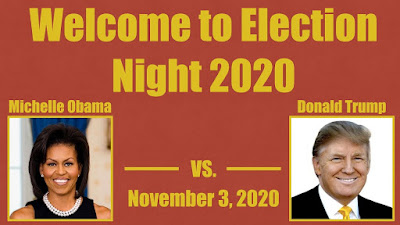 In 1933, science fiction writer H.G. Wells wrote “The Shape of Things to Come”. His startling predictions covered 173 years into the future. Many of his visions were tragically accurate, like the strategic bombing of cities.

It is December 2020. President-elect Michelle Obama is filing her transition team and administration with liberal activists. The media is gushing over her every move.

Obama waged the most effective nomination fight in memory by not waging one. She hinted and teased, but waited until May 2020 to plunge into the fray.

The crowded Democrat field played its part brilliantly. Each of the fifteen candidates exhausted themselves moving ever further left with each debate, caucus, and primary. Conservative pundits and social media were delighted to assail the Democrat field and make fun of their over the top stances. It all paved the way for Obama to enter the race to “save the Democrats from themselves”. Democrat Party leaders breathed a sigh of relief and rallied to Obama’s cause.

Starting with the release of her book, Michelle Obama fostered “Obama Nostalgia”. This movement spread throughout media and academic circles. The movement expertly positioned the Obama years (2009-2016) as a calm, scandal free, period. They claimed that Republican Bush destroyed the economy, Obama rebuilt it, and Trump benefited from it.

“Obama Nostalgia” capitalized on the chaos in Washington.

House Democrats launched investigations into President Trump and his administration on an unprecedented scale. They voted to impeach Justice Kavanaugh in March 2019. His Senate trial failed to convict with only 40 votes. The House voted to impeach Trump in May 2019 on five counts including the emoluments clause, treason, exceeding authority on border security, and obstruction of justice. The Senate trial dominated the summer of 2019. Sixty Senators voted against Trump on the emoluments and obstruction charges, falling short of the 66 votes required to convict. The 13 Republicans voting to convict tore apart the GOP across America.

The impeachment assault achieved its goal. No further Trump appointees were confirmed by the Senate, including judges. Fewer and fewer people were willing to be named to Administration positions. Except for a steady stream of Executive Orders, Trump’s Executive Branch ground to a halt. The Stock Market sagged and economic indicators reflected increased uncertainty.

Romney, Flake, and Kasich ran against Trump. They benefited from a flood of leaks from the Romney, Bush, and swamp dweller operatives embedded in Trump’s inner circles. The Never-Trump candidates collectively garnered 35 percent of the delegates, but winning only a handful of caucuses and primaries (i.e. Utah). Trump prevailed and continued to speak to huge enthusiastic crowds throughout 2020.

The media positioned 2020 as the choice between continued Trump chaos or a return to Obama calm. Republican hopes for taking down the Clintons as a counter narrative were dashed when members of the Federal Grand Jury nullified federal law by refusing to indict. Several jurors explained that, while the Clintons broke numerous laws, they could not put America through the tragedy of their trial. This was applauded by the media and academia as the right decision to “heal the country”.

Republicans in Congress and their media allies, remained ineffective and panicked throughout 2019 and 2020. They were in disarray about Trump, and how to counter the Democrats. Republicans paid the price by losing the Senate. Voters defeated the most zealous Democrat House Members, who over reached on anti-Trump accusations, shrinking their majority 223 seats.

Time is running out to craft a different future. Our nation is at stake.

Posted by Scot Faulkner at 6:30 PM