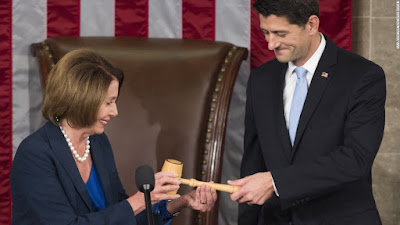 The Republicans were poised to beat the odds during the 2018 “Mid-term” election, then everything went wrong. Trump’s last minute targeting of key Senate races recovered some, but not all, of the opportunities for Republican gains. The House was another matter.

History was on the Republicans’ side - Trump’s 2016 victory did not extend to House or Senate races. Democrats gained two Senate seats and six House seats. The absence of “coat tails” meant there was a dearth of “at risk” Congressional Republicans. At the same time, ten Democrat Senate incumbents, who had benefited from Obama’s 2012 trouncing of Romney, were potentially easy targets in states where Trump won handily.

It did not take long for media pundits and liberal pollsters to declare that Trump’s behavior and policies would generate a “Blue Wave” overwhelming Republicans in 2018. The prevailing wisdom was that dozens of Republican incumbents in Districts won by Hillary Clinton were going to be decimated. Easily spooked Republicans bought into this analysis. They overlooked the fact that the Republicans who won in 2016 Hillary Districts were the strongest, not the weakest going into 2018.

Facts did not matter. On November 9, 2017, Rep. Bob Goodlatte, Chair of the House Judiciary Committee and an incumbent who consistently won re-election by over 60%, announced his retirement. Other Republican incumbents soon opted to leave. By early 2018, 26 safe Republicans, who had weathered Hillary’s best effort, had retired, creating potential for Democrat gains. Surprisingly, more than enough for Democrats to retake the House.

Republicans actually began losing the House in February 2017. Speaker Ryan and his leadership team determined their best course of action was to distance themselves from their new Republican President.

Ryan missed the opportunity to coordinate with the Republican run Executive Branch to open and re-open investigations against Obama, Clinton, and all their minions. This could have included delivering the Comey Report on Hillary Clinton’s email abuses to a Grand Jury and inevitable indictments. Every witness who refused to testify under Obama could be forced to testify. Every document refused under Obama could be released.

Aggressively exposing Obama/Clinton misdeeds 24/7 would have build the case for Republican government and crippled Democrat candidate recruitment and fundraising for 2018.

Ryan and his committee Chairs blew it, and paid the price. The Democrats caught their breath and rebounded from 2016. Unfortunately, starting in January 2018, House Democrats will show Republicans how total war is waged - 85 subpoenas are already being prepared.

Trump also contributed to Congressional losses. He laid the ground work for defeat in March 2016 when his inner circle chose to ignore advice and offers for help from Reagan alumni. Trump and his team embraced Washington functionaries from Bush, Romney, and Never Trumper networks to plan and run his Presidential Transition.

In 1981, the Reagan Transition and early White House relentlessly tracked down and removed every Carter operative and all Democrats who had careered into the bureaucracy. Every possible threat to Reagan’s revolution was marched out the door, stripped of their security clearances. By March 1981, Reagan had a clear path to greatness.

Thanks for bad, possibly malicious, advice Trump left large swaths of Obama/Clinton operatives in place, along with their security clearances and access. In the name of austerity, Trump’s slow, and in many cases nonexistent, insertion of loyalists into key Executive Branch positions left him open to being blindsided, undermined, and outmaneuvered. Chief of Staff, Reince Priebus, filled White House and Agency slots with “RINOgators” from among his Republican National Committee associates. This meant countless opportunities were lost to make Trump’s revolution a lasting operational reality beyond Executive Orders.

Trump’s final error was not declassifying, unredacting, and releasing all documents relating to the bogus Russian collusion probe. Starting months before the election, Nunes and a small band of Congressional Trump loyalists, along with conservative pundits, pleaded for Trump to release these documents. Exposing “sources and methods” was not an issue. The “Deep State” wanted to avoid embarrassment and convinced Trump to do the wrong thing.

The documents, as characterized by Nunes and others who had actually read them, would have destroyed the Democrats, the Mueller Probe, and the liberal media. A pre-election release would have eviscerated the opposition and possibly saved the House.

The one hope America has is that House Democrats will excel at “jumping the shark” and overreach well beyond the Senate Democrats’ fraudulent attacks on Justice Kavanaugh.

Democrats’ desire for investigation not legislation will not bring down Trump. Pursuing their revenge fantasies will only prove they are not ready to rationally govern.

November 3, 2020 will be another day of reckoning.

Posted by Scot Faulkner at 9:43 PM

I've been saying for a YEAR that I cannot understand Trump's not housecleaning HIS branch immediately?!

Keep whistling as darkness descends on the Republican brand. Better try to stay healthy and have lots of conservative babies...especially boys!

Longer term issues relating to Republican "brand" will be addressed in future columns. The primary challenge facing Republicans, and Americans in general, is the steady decline in knowledge relating to history, geography, and civics.

Since the mid-1970s public schools have eliminated and "dumbed down" teaching of these fundamentals for a viable society. Shift of teachers from center/right (including the old patriotic Democrat ideology of Hubert Humphrey, "Scoop" Jackson, and John Kennedy) to extreme left have fostered two generations of anti-American, anti-capitalist ignorance.