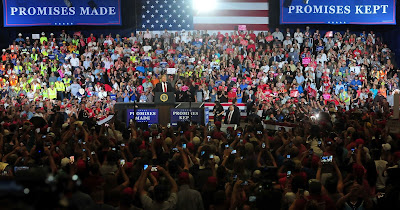 Never in a million years did Barack Obama and Hillary Clinton think Donald J Trump was going to become POTUS. For eight years of the Obama Presidency he completely disregarded the Constitution of the United States. Did everything he could to turn America into a weaker nation economically and made us a laughing stock on the world stage. Expanded the Deep State and politicized the IRS, CIA, FBI and Department Of Justice to attack his political opponents.

But, on November 8, 2016 Donald J. Trump was elected the 45th POTUS and Obama’s world just got turned up side down. Since that famous night when we saw Wisconsin go Republican at 11:15 PM and the Clinton victory party turned into a leftist nightmare it has all started to come out what Obama and the political left have been up to for over 60 years. And right now Obama is out there speaking to rallies of 2,000 people and Trump is holding MAGA rallies speaking to 20,000 plus supporters with a message that will drive his voter base to the polls on Tuesday and the results are going to again shock what is left of the Democratic Party.

The left has been engaged in a war against America since the rise of the Children of the 60’s. To them, it has been an all out war where nothing is held sacred and nothing is seen beyond pale. It has been a war they have fought with violence, set up a Deep State inside our federal bureaucracy, and propagated the violent take over of our college and universities.

Finally that has all come to an end. Donald J Trump is America’s ﬁrst wartime president in the Culture War. During wartime, things like “dignity” and “collegiality” simply aren’t the most essential qualities one looks for in their warriors. General Ulysses Grant was a drunk, General George Patton was a vulgar SOB and Trump is a ﬁghter like the left has never faced before. In war, all that counts are the results. Trump is our cultural warrior. And what’s particularly interesting is that, like Patton standing over the battleﬁeld as his tanks obliterated Rommel’s, he’s shouting, “You magniﬁcent bastard, I read your book!” That is just the icing on the cake, but it’s wonderful to see that not only is Trump ﬁghting, he’s defeating the left using their own tactics and that’s what is driving them crazy.

So say anything you want about this president - I get it - he can be vulgar, he can be crude, he can be undigniﬁed at times, but Donald J Trump in two short years has done more to improve the American way of life than any other president in our lifetime. We call that protecting the American Dream and he damn sure isn’t going to let the left ruin it.

He ﬁghts to keep America First! So ﬁght on you Magniﬁcent Bastard.