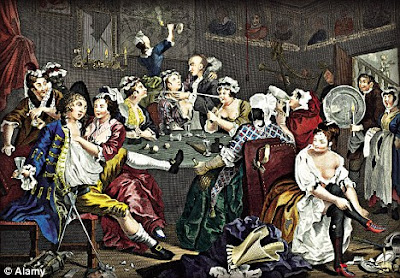 Liberals hoped that selectively purging their ranks of their rankest elements would give them the moral high ground to drive President Trump from office by declaring him a sexual predator.

What happened instead was liberals in the media, government, and Hollywood being accused of sexual assault every twenty hours since Harvey Weinstein’s demise.

Americans know who has run our country since the 1930s.  Republicans have simultaneously controlled the Senate, House, and White House only 7 years since the 1932 elections.  Generations of Democrats in power led to generations of abuse.

Hollywood has always been liberal.  In fact, it was infested with Soviet agents.  What was dismissed as John Birch paranoia was proven when the Venona Papers were released from the KGB archives.

The media was liberal, but patriotic, until the 1960s, when it took a hard left turn after the passing of leading owners and publishers.

Left wing dominance of the three sectors that run America allowed for a cesspool of moral turpitude to flourish.  Each protected each other as a code of silence was instituted.  When the perversions or crimes of one of its members was exposed the iron triangle closed ranks stating that such behavior was deplorable, but should not overshadow the person’s advocacy of issues they held dear.

Most of the time, sexual assault, violence, and exploitation were covered-up and the American public remained ignorant to what was really happening.

In the first twenty-four hours after the assassination of John F. Kennedy, the logs of the Presidential Yacht, Sequoia, were removed and destroyed.  As a Navy vessel, the log documented everyone who boarded the ship.  The government log entries for Marilyn Monroe, Natalie Wood, and countless other Kennedy mistresses vanished.  The alteration of the yacht’s master state room, a special slotted door for crew to pass official documents to Kennedy without having to enter during his trysts, was not known until questions were asked during the restoration of the vessel.

There were always “casting couches” in all three sectors.  For decades, Capitol Hill has been notorious for aging Senators and Congressmen picking off attractive staffers, interns, and pages.  Ted Kennedy and Chris Dodd were known for making "waitress sandwiches" in the back rooms of Capitol Hill restaurants.

In the early 1990s, the House of Representatives sank into a quagmire of sexual and financial corruption.  Conservative media exposure of the Post Office, Bank, Gift Shop, and Restaurant scandals ultimately toppled House Democrats and sent several Members to jail.  The reform team that cleaned-up the decades old mess uncovered countless abuses of power.  It became clear, given the mountains of court orders being signed by the Chief Administrative Officer, that at least a third of House Members were abusing their power to amass fortunes, fuel addictions, or pursue sexual conquests.

This is why the Republican House passed HR 1.  The bill forced the Legislative Branch to comply with all federal laws and regulations it passed.  A new Compliance Office was created to enforce the law while maintaining the Constitutional separation of powers.

While the Chief Administrative Officer and his team established the office and procedures, other House Members quietly created a secret mechanism for settling claims of harassment, discrimination, and hostile work environments.  This mechanism was tucked up under “Member Services” within the Office of the Clerk.  It was this office that has used tax dollars to settle claims and keep Member predation under wraps.

Recently, a newly elected Democrat Senator was privately admonished by his colleagues for taking more time to find his mistress the best Capitol Hill townhouse than he did on selecting the best committee assignment.  This is a person who boasts about his family values.  This should all end
.
There are steps that need to be taken to drain the sexual swamp in which the self-styled leaders of America wallow.  First and foremost, the practice of using tax dollars to settle claims must end.  There should be no “sovereign immunity” for loutish behavior.  Voters should know what their representative is really doing.

Secondly, those who defended President Clinton during his impeachment, in Congress, in Hollywood, and the media, should never be given a credible forum to attack President Trump relating to sexual issues.  They are hypocrites and forfeited their moral high ground decades ago.

Thirdly, any candidate, of either party, should know that their personal failings will be fair game.  Projecting a loving family in campaign ads, while being an adulterer, should be considered “resume padding”.  They should be held accountable even more than someone who fakes being a veteran or a college graduate.

Posted by Scot Faulkner at 6:02 PM