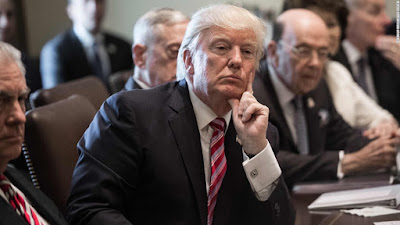 President Trump made draining Washington’s Swamp the centerpiece of his Presidency.  The swamp is winning.  Its RINOgators are on the verge of destroying the Trump Presidency.

Trump’s Executive Branch is now running on empty.  His appointment process is the slowest since Jimmy Carter in 1977.  He recently defended his depleted ranks of loyalists, “we don’t need all of the people. You know, it’s called cost saving.”  In fact, Trump not bringing in his loyalists means the Executive Branch is being run by Obama holdovers, and senior careerists, who run the government from acting positions.  They owe their last eight years of promotions and bonuses to their loyally enforcing and implementing Obama’s policies.

The swamp is exploiting Trump’s misunderstanding of “people equal policy”.

The few political managers Trump has placed are completely isolated and outmaneuvered. Worse, most of Trump’s appointments are people who owe their loyalty to everyone but Trump.  The inner circles of the White House, and legions of political operatives in the Departments and Agencies, wish Jeb Bush was President.  Their disloyalty to Trump is manifest in leaks and their ineffectual and slow paced efforts to change anything.

Insiders explain that Trump dislikes people with government experience and that he feels Reagan and his appointees could have done more to shrink government.  If that is so, why is he fixated on bringing in Bush alumni who grew government?

Trump declared that he would drain Washington’s swamp by not hiring lobbyists.  During the transition, countless personnel clearance forms were used supposedly to prevent lobbyists insinuating themselves. This failed.  USA Today reports that more than 100 former federal lobbyists are now working inside the Trump Administration.

Trump has been ill-served and misled from the very beginning.  During the Spring of 2016, key elements of the Reagan coalition, including Reagan Administration alumni and key think tanks, were ready, willing, and able to help Trump be successful.  They were ignored.

In June 2016, Trump realized he needed to prepare for being President.  Instead of turning to those conservatives who were openly and passionately supporting him, Trump turned to New Jersey Governor Chris Christie.  Where Trump conservatives would have opened the door to legions of proven change agents, Christie opened the flood gates to Mitt Romney and Jeb Bush operatives.  Where Trump loyalists would have worked for free, Christie spent millions on hiring the Boston Consulting Group to run the Transition.  The Boston Consulting Group had never run a Presidential Transition, but the Managing Partner in charge of the contract was the daughter of longtime Bush loyalist.

The Trump Transition ended-up preparing for the Romney/Bush Administration.  Even Steve Bannon was duped into believing only the Washington Establishment was capable of helping Trump prepare for his Presidency.  Highly capable conservatives, Reagan alumni, and professionals who were for Trump since June 2015, were systematically shut out.  Never-Trumpers, even ones who ran anti-Trump floor operations at the Republican National Convention, were welcomed.

The Romney/Bush Transition became the Romney/Bush Administration on January 20, 2017. At the same time, Reince Priebus and his minions from the Republican National Committee (RNC) took over core White House operations.  This included the Office of Presidential Personnel that clears and recommends all political appointees.  Priebus rightly deserves credit for quelling Republican rebellion in the final months of the 2016 campaign.  For this, Trump should have rewarded Preibus with the non-critical Ambassadorship of his choice.  Instead, Priebus became Chief of Staff and proceeded to fill Trump’s inner circle with RNC operatives, few of whom even liked Trump.  The RNC operatives in charge of Presidential Personnel placed their friends on Trump’s political front line.  They even conducted purges of the few Trump loyalists who had made it inside.  Ironically, Never-Trumpers got away with accusing Always-Trumpers of being disloyal.

While President Trump was signing Executive Orders and making inspiring speeches, the RINOgators of the Washington, DC swamp were commandeering key positions, making sure Trump’s vision would never become a lasting operational reality.  They are doing everything possible to protect their swamp.

The most tragic result of Trump being misled is that he is spending his time on actions that will be swept away with the next Administration.  The Washington swamp is drawing Trump into this trap.  Time magazine recently ran an alarmist cover story on Trump’s regulatory reductions.  Even Trump’s inner circle believes the hype. His communications director declared, “No President or Administration has deregulated or withdrawn as many anticipated regulatory actions as this one in this short amount of time.”  In reality, saving $560 million is a pittance against the $2+ trillion regulatory burden faced by America business.

At best, stopping new regulations is like trimming Kudzu.  All these bad policies and regulations have only been driven underground.  They remain in desk drawers and computer files ready to be unleashed. Unless the underlying policies, people, and laws are changed, all these sidelined regulations will spring forth the moment Trump leaves office. The people who would actually pull-up the regulatory Kudzu by its roots are not in place.  Washington, DC’s “RINOgators” have settled in to protect their status quo and wait out Trump.

Real and lasting change will happen only if Trump appoints sufficient numbers of his actual loyalists as soon as possible. He must act quickly and decisively to remove Bush/Romney traitors and replace them with those fully committed to his revolution.  Perhaps the dual attacks by Bush 41 and 43 will open Trump’s eyes to the treachery around him.

Posted by Scot Faulkner at 3:40 PM