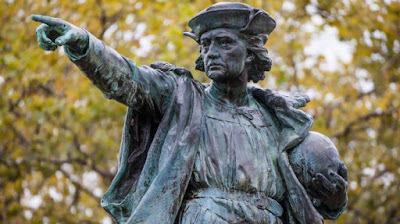 Columbus and his achievements are about unity. The forces of political correctness have no idea what they are talking about.

Columbus’ discovery of the Western Hemisphere permanently reconnected the Earth for the first time since the Pangea super continent broke apart 175 million years ago.


A brief period of record low sea levels, caused by the last Ice Age, allowed pre-history humans to migrate into the Americas from Europe around 20,000 BC.  An Asian land bridge opened another short-lived migration corridor along the Alaskan coast in 12,000 BC.  The indigenous people of the Americas were actually its “first immigrants”. Rising seas then sealed them off from the rest of the world.

It was inevitable that humankind would ultimately reconnect.  It was only a matter of time.  The Viking sagas chronicle exploration and fishing settlements in Newfoundland around 1,000 AD.  This is when warmer global temperatures made Greenland and the Arctic waters suitable for navigation and far northern lands viable for habitation.  Others may have stumbled upon the Americas, but their interactions were short lived and isolated.  The reunification of Earth would have to wait another 400 years.

Unique forces of economics, history, and knowledge eventually led to reunifying humankind and the world’s ecosystems.

The events that set Columbus and his three ships towards destiny began with the fall of Constantinople on May 29, 1453 to the Ottoman Empire.  The Islamic Ottomans took control of all the overland connections to India and China.  They made the Silk Road, and other lucrative trade links to the East, prohibitively expensive and problematic.

In 1412, the Portuguese began methodically establishing an alternative sea-based trade route to Asia.  In 1488, Bartholomew Diaz rounded the Cape of Good Hope. Portugal, with its line of African forts and massive fleet, aspired to join the Ottomans in controlling  Asian trade.

No other European power was capable of competing against these two international forces as most were locked in internal strife or were content with being regional powers.

On January 2, 1492, Spain defeated the last Islamic forces on the Iberian Peninsula.  The duel monarchy of Ferdinand and Isabella turned their vision of conquest to competing with Portugal.

Christopher Columbus was uniquely situated to make the Spanish Monarchs’ dream come true.  Besides being a skilled seaman, Columbus was a highly astute scholar.  He spent years acquiring knowledge about the Atlantic Ocean, including what would become known as its “trade winds”, which would speed travel.

Columbus was at the center of the debate over the size of the Earth.  Educated people knew the Earth was round, but they differed on its size.  No ship’s crew could be provisioned to sail west over a vast ocean all the way to China.  Columbus was armed with knowledge of the Vikings and knew a large land mass was much closer than current wisdom assumed.  His mistake was thinking it was Asia, not an entire undiscovered hemisphere.

Columbus convinced the Spanish Monarchs it was good business and a wise investment to underwrite an expedition sailing west into the unexplored areas of the Atlantic Ocean.  The Monarchs knew that Spain would become a major world power by building their own trade monopoly if Columbus was successful.

Starting on August 3, 1492, the single most pivotal action in the Earth’s human history began.  On October 12, 1492, Columbus and his landing party stepped onto a Caribbean beach and nothing would ever be the same.

Detractors scoff, stating that the people of the Americas knew where they were and did not need to be discovered.  Anti-Columbus historians decry the spread of disease and conquest that devastated the first peoples of the Americas.  Reunifying the world after 175 million years had irreversible consequences, good and bad. None of Americas’ cultures had a maritime tradition outside of brief fishing and hunting sojourns within sight of land.  Reunifying the Earth was only going to happen from the “Old World”.  The mingling of flora and fauna created impacts that resonate to this day.

Columbus is rightly recognized as the person who changed the world.  He embodies humanity’s striving to acquire and apply knowledge, and our desire to explore.  Many South American nations, along with Italy and Spain, celebrate Columbus and the day everything changed.

The United State celebrated the 300th Anniversary of this epic moment in 1792.  It became our nation’s official holiday in 1937.

We should be honoring this unifying moment in history instead of trying to erase it.