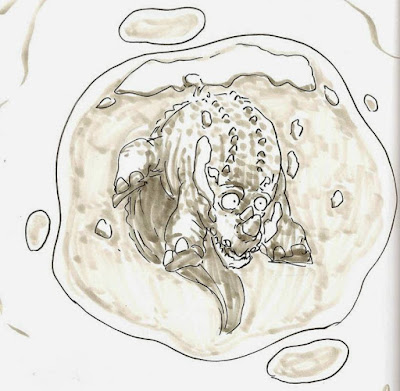 A very dangerous species is loose in Washington, DC.  If it’s not eradicated it will bring ruin to Trump’s Administration and the nation.

RINOgator is a subspecies of fake Republicans (as in Republican In Name Only) that lives in the swamp of our nation’s Capital.   The swamp is its natural habitat, filled with conflicts of interest, incestuous relationships, avoidance of accountability, hiding documents and information from the public; waste, fraud, and abuse.

RINOgators’ role in life is to expand the swamp and to destroy anyone who tries to drain it. Any reduction in the swamp reduces their numbers and threatens the species.

RINOgators eat tax dollars and absorb energy from reform minded humans. They have insatiable appetites and are never full.  There is always one more meal to eat.

RINOgators are highly territorial.  They relentlessly defend their turf among Congressional Committees and special interests. It is far more important to maintain their turf than for anything to be accomplished.

RINOgators live in close-knit family units.  One generation promotes the next through education, internships, sinecures, and contracts.  There is constant intermingling and intermarriage with other RINOgator family units.

RINOgators can also be highly incestuous. They will give awards, place media stories, hire, and promote family members at every opportunity.  Multi-generational RINOgator family units hold more territory and become impervious to elections.

RINOgators may migrate to corporate, academic, and media positions, to promote the swamp, but will always return to their native swamp.

RINOgators are pernicious.  They use their knowledge of the swamp to convince their prey that they are necessary.  Their prey willingly appoints them to office, listens to their advice, and invites them into their inner circles. Like cowbirds, RINOgators lay their eggs in the nests of reformers, setting the stage for their young to devour the souls of competing species.

RINOgators have a distinct call, which is heard on cable news, in policy forums, and reported in the mainstream media.  Its call is for maintaining the status quo, no matter what.  Lesser calls are for “further study”, new programs, new legislation, and more funding.  Squawks of alarm are heard whenever reformers call for accountability, transparency, “running government like a business”, “doing more with less”, privatization, and cutbacks.  Squawks are usually accompanied by assertions of “we are unique”, “it cannot be done”, and various lies about how the process “actually” works.

RINOgators have an array of formidable defenses.  Their most effective is delay. Their other defense mechanisms include the ability to erase memory, dismiss facts, and divert attention so reformers pursue only irrelevant or tactical issues.

RINOgators are chameleons.  They adopt the rhetoric of their enemies to better blend in until the right moment to strike.

The Trump era has become a major threat to the RINOgators and their swamp.  The RINOgators did not see Trump as a threat until he had entered their territory.

That is why the RINOgators have forged elaborate family groupings, nesting on Capitol Hill, to thwart Trump initiatives.  RINOgators chose not to attack the past foibles of Obama and Hillary.  They think it is better having Democrats on the offense against Trump instead of on the defense.

RINOgators have the innate ability to rebound after being stunned.  That is why, after being surprised by Trump winning the nomination, they insinuated themselves into Trump’s transition planning, transition team, and Administration.  Legions of RINOgators wrote Trump Transition briefing books and developed personnel “vetting” processes that slowed the staffing of Trump’s Administration to a crawl. They adjusted selection criteria to favor swamp preservationists and surrounded incoming Trump Executives with them, instead of swamp drainers.

RINOgator eradication efforts have been sporadic and only partially successful.  The main barrier to eradication is convincing people RINOgators exist. Their chameleon defenses allow them to avoid detection.  RINOgators and their allies have the unique talent of reflecting problems and disappointments back onto Trump.  This reflective surface is a key part of the RINOgator’s outer armor.

Thankfully, RINOgators have weaknesses.  They are susceptible to sunshine when light is shown on their true selves.  They are too smug, leading them to make wrong assumptions about the American people.

The RINOgator eradication program must begin with Americans unmasking the species and ripping away its reflective surfaces.  RINOgators are especially vulnerable during primaries.

Trump and the nation must track down and wipe-out the RINOgator, before it is too late.  This is critical to draining the swamp.

[Scot Faulkner helps private corporations and governments save billions of dollars by flattening organizations; achieving dramatic and sustainable cost reductions while improving operational and service excellence. He served as the Chief Administrative Officer of the U.S. House of Representatives.  He also served on the White House Staff, and in Executive Appointments, during the Reagan Administration.]

Posted by Scot Faulkner at 2:32 PM