Why Republicans Continue to Lose 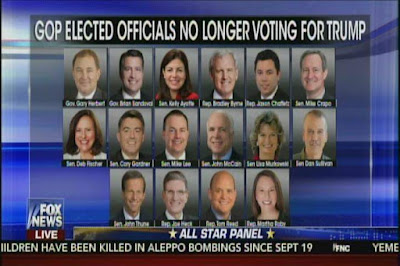 A shorter version was published at http://www.newsmax.com/ScotFaulkner/candy-crowley-establishment-Tip-ONeill/2016/10/10/id/752603/

The “hot mic” tape of Donald Trump sounding boorish is now dominating the 2016 Presidential Campaign.  It is a safe bet that the Democrats, and their many media allies, have a Trump stockpile of embarrassing material ready to roll out in the coming weeks.

Trump and his supporters are confronting asymmetrical warfare.  His offensive words are considered more damning and any of Hillary Clinton’s misdeeds.

The Democrats have always played dirty.  In 1980, Speaker Tip O’Neil withheld a Washington, DC police report on conservative Congressman Bob Bauman’s sexuality for eighteen months in order to release it five weeks before Election Day.  Its timing was designed for maximum damage with minimum recovery time.

The most infamous and extreme example from the Democrat’s “win at all costs” playbook is covering up Ted Kennedy’s misdeeds.  On July 18, 1969, Senator Ted Kennedy killed 28 year-old Mary Jo Kopechne in a tragic car accident on Chappaquiddick Island near Martha’s Vineyard. Liberals in politics and media suppressed the incident by ignoring Kennedy’s multiple lies and inconsistencies. Kennedy went on being a liberal icon. Media continued to dismiss and minimize Kopechne’s death, and Kennedy’s countless sexual affairs. Earlier this year, in the propaganda film about Clarence Thomas’ confirmation, Hollywood portrayed Kennedy as a defender of abused women.

The other side of the Democrat’s playbook is character assassination of Republicans.  In 2012, Mitt Romney was portrayed as a callous and clueless elitist.  Senator Reid (D-NV) bragged that he lied about Romney not paying taxes, boasting, “it worked didn’t it?  He lost!”  The facts never get in the way of a good attack.

Over the past few months, Democrats have never talked about the substance of the leaks damaging to Hillary Clinton.  In lock step, Democrats immediately attacked the veracity of the leaked material and then the leaks’ source.   By the time definitive proof was available, the media and the public had moved onto to other things.

In 2012, “bin Laden is dead and Detroit is alive” was the mantra that would defy the facts.  The Benghazi attack was drowned out with the bogus video story.  Candy Crowley did her duty by throwing a body block against Mitt Romney in the second Presidential Debate to maintain the lie.

In 2016, “America is safer and more prosperous than ever” is the Democrats' mantra.  Every terrorist attack on American soil is stifled or obscured with bogus alternative motives.  Economic reports are “cooked” or spun.  Nothing must stand in the way of Obama’s third term.

Some Republicans, and many of the conservative media, do their best to counter the Democrat onslaught.  However, they are constantly crippled by most Republicans who break and run when the first shots are fired in anger.

During Bill Clinton’s Presidency, Republicans bungled their investigation of Chinese campaign donations in exchange for trade concessions and ownership of a portion of the Port of Los Angeles.  That was true treason.

Republicans bungled impeachment by self-immolating over their own sexual affairs, including the resignation of Congressman Bob Livingston on the cusp of his becoming Speaker.  Republicans had hoped to shame Clinton into resigning or at least confessing.  They forgot that Democrats have no shame.

Republicans always seem to get it wrong.  They will shoot their wounded, like the current Trump conflagration, and then become hypocrites with favored members of their Washington Establishment.  Mark Sanford was welcomed into Congress after his lying to the public over being on the Appalachian Trail while he was actually with his Argentine mistress. Republicans rallied around re-electing Senator David Vitter after his prostitute scandal.  Where is the ire about them from Kelly Ayotte and Paul Ryan?

A Trump loss will tear the Republican Party apart.  Establishment and Faith-based factions will annihilate each other with “I told you so” arguments for Bush or Cruz.  Democrats will laugh as they prepare a Texas Castro brother to take the Presidency in 2024 with the slogan “time for a Hispanic!” from the same playbook that was used for “time for an African American!” and “time for a woman!”
Posted by Scot Faulkner at 10:24 PM