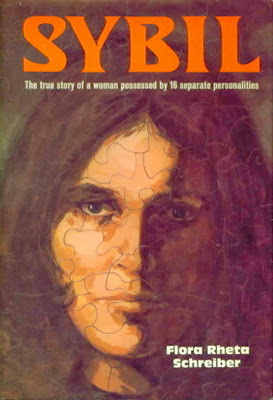 The Republican Party is coming apart at the seams.

The fratricidal chaos that reigned during the government shut down is the culmination of years of factional strife, internal contradictions, and huge egos.

The Republicans' elephant symbol should be replaced with a more accurate rendering of its current woes: Sybil.

“Sybil” was the main character in a 1973 best selling book about multiple personality disorder. Sybil manifested sixteen personalities, each dissociated from her central personality. That is today’s Republican Party and conservative movement in a nut shell.

Each Republican manifestation is based upon a separate reality. Within each reality there are leaders, acolytes, and rabid supporters. Those residing within each reality dwell in an echo chamber of self-affirmation that constantly asserts they are the only ones capable of saving America and their movement from the forces of darkness. Each reality opposes the others assuming any alternative reality to their own at best diminishes their ability to prevail, and at worst, poses a clear and present danger to their existence and that of our nation.

Political parties are coalitions of like minded interests, coalesced around a core of fundamental beliefs, clustered together in order to benefit from an overarching organization focused on electoral success. The Republican Party of 2013 is none of these.

Today’s Republican Party is being torn asunder by contradictory forces at war with each other and with the broader populace. Libertarians who want virtually no government are at war with Fundamentalist TheoCons who want a huge government to patrol neighborhoods enforcing biblical imperatives relating to sex and belief. Isolationists who want to pull back from the world and construct a literal as well as figurative wall around America are at war with NeoCons who are in denial about America’s failures in Afghanistan and Iraq while seeking other places to intervene. Fiscal hawks who have spent decades seeking ways to rein-in Washington’s spending binge are at war with the Tea Party who want to shut the government down no matter what the results. Wall Street and Main Street Republicans, who hate regulation but work within the system to lessen its effects, are fighting Tea Party activists, who echo “Occupy Wall Street” conspiracies about crony capitalism.

What happens next? Is the GOP of 2013 becoming the Whig Party of the 1850s? Will the Tea Party fizzle out or prevail over a crumbling Republican establishment? While doctrinaire liberals are dancing a Conga Line hoping for an end of Reaganism that will usher in a new era of rampant government growth and spending, other Americans are legitimately worried about not having a viable opposition voice.

More rational voices within the conservative and Republican movements need to unite around core principles that are relevant and compelling for the 21st Century. Start with the rule of law, holding government accountable at all levels, demanding transparency in all public processes, and consistent adherence to ethics and integrity by all officials and public sector functions. Upon this foundation, add that government should be the solution of last resort, after personal actions and collective efforts of the private sector and local community fail to address challenges and societal ills. When a government role is warranted, it must be designed and implemented to successfully meet tangible and measurable objectives using public resources in the most cost effective ways possible.

Within this framework Republicans should rationally engage in a civil discourse on where the Party’s center of gravity should reside on strategic issues. Embedded in this discourse should be a new toleration of differences among reasonable people. No one agrees 100 percent with another person, not even spouses and siblings - so why demand purity and mindless adherence?

The strategic issues that will frame a new Republic Party and potentially form a winning coalition movement include, but may not be limited to:

[1] The role of government. There will always be a public sector in America. Republicans traditionally buy into the 300+ year old concept of a social contract whereby individuals freely give up some freedoms and delegate some decisions to live and prosper in an ordered world. This is as basic as stopping at a stop sign, paying for trash collection, agreeing to litigate disputes in courts of law, and electing representatives to address policy issues. How much government, where it should reside (local, state, federal), the role of public input and accountability, the appropriate structure for public action (regulation, tax policy, public program), and its costs are areas where reasonable disagreements will occur and where there is no one right answer to apply to every locale or issue.

[2] The role of America in the world. America is part of an increasingly complex and linked global community. Since World War II, America has been its leader – economically, politically, and militarily. Since the collapse of the Soviet Empire and the rise of the information age, the world has evolved into many centers of economic and civic vitality. Some countries, like the BRICS (Brazil, Russia, India, China, South Africa), are willing to challenge America’s hegemony. In some industries and some regions, America is no longer the leader or even competitive. Internally, these variables harm economic opportunity and job creation. Externally, it is about free and fair trade as well as about who becomes the first responder to tyranny or disaster should America reduce its global reach. These are reasonable areas for discussion. America needs a competitive strategy for the 21st Century and it needs realistic “rules of thumb” that guide split second decisions when terrorism or other unforeseen events suddenly disrupt our existence.

[3] Healthcare. It is truly unfortunate that the debate over healthcare started in the partisan sphere. Providing health services to a work force that is increasingly without employer provided benefits is important, but the discussion should have first centered on standards of care and caregiving. Americans are aging. This means that health issues are shifting from shock/trauma acute care to long term care of chronic conditions (like diabetes, congestive heart failure, and Alzheimer’s). How to support the role of families in care giving? How to allow for using successful treatments that are traditional in many parts of the world, but viewed as alternative or nontraditional in an American healthcare system dominated by pharmaceutical and insurance companies? How to promote technology-enabled remote care and wellness to supplement or supplant office and hospital visits? Baby boomers are confronting these issues every day as their parents live into their 80s and 90s. Facilitating a sincere nonpartisan dialogue on this multitude of heartfelt issues would be a most positive addition to public policy.

In addition to Republicans returning to sane and productive input on strategic policy issues, they must begin holding their leaders, and leader wannabes, to established standards of leadership. Everyone has an ego, especially leaders, but true leaders rise above and think beyond themselves. Can anyone imagine Ronald Reagan doing a reality television show? Can anyone imagine Barry Goldwater making every speech and media appearance about himself? Would William F. Buckley have ignored facts to win a rhetorical point? Republicans lack anyone even remotely approaching these giants of modern conservatism – and that is the problem. It is time for Republicans to shun cults of personality and demand leaders who think first about what is best for America, and promote the 300+ year philosophical foundations of conservatism, over their personal fundraising and campaigning.

The Republicans’ multiple personality disorder will not be cured overnight. These suggestions form a good course of treatment. The first step must be for the warring factions to realize what they are doing to themselves, their movement, and their country.

Posted by Scot Faulkner at 6:10 PM