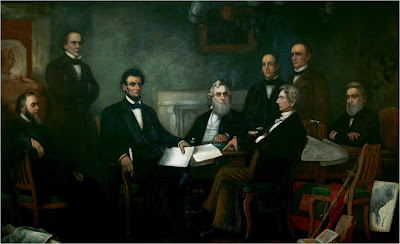 Published as part of Constituting America's "constitution reader" series
"90 in 90: History Holds the Key to the Future”
in cooperation with Hillsdale College
http://www.constitutingamerica.org/blog/blog/2013/05/23/wednesday-may-23-2013-essay-69-the-emancipation-proclamation-scot-faulkner-former-chief-administrative-officer-of-the-u-s-house-of-representatives-and-currently-president-of-friends/

On January 1, 1863, President Abraham Lincoln’s right hand was trembling. He had spent the morning shaking hundreds of hands as part of the traditional New Year’s Day greetings at the White House. He remarked to Secretary of State, William Seward, that, “if my signature wavers they will say I was afraid to sign it.” He then took up his pen and wrote his name firmly on the Emancipation Proclamation. As Seward co-signed the document, Lincoln mused, “Seward, if I am to be remembered in history at all, it will probably be in connection with this piece of paper”. [1]

The Emancipation Proclamation was a masterful document in that it accomplished so much while preserving strict constitutional principles. Lincoln was first and foremost an attorney. He understood the need for government to act based upon the Constitution, which he had sworn to uphold, “I have never understood that the Presidency conferred upon me an unrestricted right to act officially upon this judgment and feeling [that slavery is wrong]…I understood…that in ordinary course of civil administration this oath even forbade me to practically indulge my primary abstract judgment on the moral question of slavery.” [2]

The reason the Emancipation Proclamation intentionally has, “all the moral grandeur of a bill of lading” is that it is a, “narrowly justified executive action taken by the commander-in-chief of the armed services of the United States under the power granted him only in wartime, doing something he absolutely could not have done in peacetime, or merely on the basis of his own opinion.” [3]

Lincoln’s act was bold and reflected his keen understanding of the Emancipation Proclamation as a pivotal moment in the evolution of public policy regarding slavery and its abolition.

In the mid-1850s, the Republican Party brought together diverse factions from the splintering Democratic Party and the imploding Whig Party. While the “radicals” wanted immediate and universal abolition of slavery everywhere, the centrist position focused on controlling or preventing the expansion of slavery into new territories. Gerrit Smith, one of the financial backers of John Brown’s paramilitary activities on behalf of abolition in both Kansas and at Harpers Ferry[4], derisively declared, “The Republican party refuses to oppose slavery where it is, and opposes it only where it is not.” [5]

The Republican platforms of 1856 and 1860 assertively opposed expansion of slavery into the territories, but remained silent on outright abolition within existing states. At his 1861 Inauguration, Lincoln confronted seven southern states that had already seceded and the possible secession of eight more, which included the four key Border States. Nearly a third of his Inaugural Address was spent assuring these states that he swore an oath to defend the Constitution and the Constitution allowed slavery in existing states, “I add, too, that all the protection which, consistently with the Constitution and the laws, can be given will be cheerfully given to all the States when lawfully demanded, for whatever cause—as cheerfully to one section as to another.” He went onto to provide assurances that, “I have no purpose, directly or indirectly, to interfere with the institution of slavery in the States where it exists. I believe I have no lawful right to do so, and I have no inclination to do so.” [6]

Lincoln’s assurances were designed to “buy time” for his administration to form. They also reflected the political reality that few in the North wanted a war based solely on emancipating slaves. [7]

Political realities were quickly overwhelmed by military ones. The moment Union forces occupied southern territory, slaves flocked to them in the hopes of gaining immediate freedom. The first such action occurred at Fort Monroe in Virginia on May 24, 1861. General Benjamin Butler established the concept of “contraband” whereby escaped slaves would be welcomed into Northern armies and used as workers, “as I would for any other property of a private citizen which the exigencies of the service seemed to require.” As a lawyer, Butler further invoked the concept that property used in a crime (in this case an illegal rebellion) can “be confiscated as “contraband” by legal authorities.” [8]

Butler’s precedent setting action led to a rapid evolution of Northern policy on freeing slaves. On August 6, 1861, Lincoln signed the First Confiscation Act, which authorized the confiscation of any Confederate property by Union forces ("property" included slaves). This meant that all slaves that fought or worked for the Confederate military were freed whenever they were "confiscated" by Union troops.

In October 1861, Secretary of War, Simon Cameron, expanded upon Congressional policy in his annual report, “Those who make war against the Government justly forfeit all rights of property…It is clearly a right of the Government to arm slaves, when it may become necessary, as it is to use gun-powder taken from the enemy.” [9]

Northern politicians were uniting around the concept that slavery was the life blood of the Confederate war effort. On January 14, 1862, Rep. George Julian (R-Indiana) asserted, “When I say that this rebellion has its source and life in slavery, I only repeat a truism. [The four million slaves] cannot be neutral. As laborers, if not soldiers, they will be the allies of the rebels, or of the Union.” [10] This sentiment inspired seven partial emancipation bills and the Second Confiscation Act. [11]

By the summer of 1862, the Second Confiscation Act was passed. It stated that any Confederate official, military or civilian, who did not surrender within sixty days of the act's passage, would have their slaves freed. While this was only applicable to Confederate areas that were already occupied by the Union Army, it did state that all slaves who took refuge in Union areas were "captives of war" and would be set free.

Emboldened by Congressional and Presidential policies, Union field commanders pushed the boundaries of interpretation as they moved deeper into Southern territory. On May 9, 1862, General David Hunter issued, “a sweeping declaration of martial law abolishing slavery in all three states constituting his “Department of the South.” [12] Lincoln quickly reversed this unilateral act, but added that while Hunter’s order might, “become a necessity indispensible to the maintenance of the [Union] government,” it was a decision “I reserve to myself”. [13]

Emancipation was being viewed as a means to victory. Lincoln began to also view it as an end. His efforts to cajole Border State politicians were going no where. Military reality was making his accommodation less and less necessary. On July 13, 1862 the Border State leaders issued a manifesto rejecting Lincoln’s last proposal. On that same day, Lincoln privately told Seward and Gideon Welles, his Secretary of the Navy, that he was ready to issue the Emancipation Proclamation. [14]

Geopolitics was also entering the equation. Lincoln had kept his public pronouncements on slavery to a minimum over concern for Border State loyalty. European nations viewed Lincoln’s tepid pronouncements as a license to trade with the Confederacy under international law. British and French neutrality was skirted by highly creative Confederate agents and European sympathizers. As long as America’s civil war was officially about opposing Southern independence, many British liberal and business interests rallied to the Southern cause. As the war wore on, top European political leaders wished to rebuild their economies, which were being damaged by the conflict. Recognition of the Confederacy, and mediating a peace, were actively debated within the government of British Prime Minister Lord Henry Palmerston. [15]

Lincoln and Seward realized emancipating the slaves would not only alter the dynamic of the war in America, but also end European support for recognition and intervention. England had abolished slavery throughout its empire in 1833 and would not side with a slave nation if the goal of war became emancipation. Lincoln was well aware of this geopolitical chess board, “Emancipation would weaken the rebels by drawing off their laborers and would help us in Europe, and convince them that we are incited by something more than ambition”. [16]

On July 22, 1862, Lincoln called a Cabinet meeting to announce his intention to issue the Emancipation Proclamation. It was framed as an imperative of war, [17] “by virtue of the power in me vested as Commander-in-Chief, of the Army and Navy of the United States in time of actual armed rebellion against the authority and government of the United States, and as a fit and necessary war measure for suppressing said rebellion.” Lincoln also justified, “upon this act, sincerely believed to be an act of justice, warranted by the Constitution, upon military necessity...” Another significant military aspect of the Emancipation opened the door for a multi-racial army and society, “And I further declare and make known, that such persons of suitable condition, will be received into the armed service of the United States to garrison forts, positions, stations, and other places, and to man vessels of all sorts in said service.”

Seward raised concerns over the timing of the Proclamation; citing recent Confederate victories might make its issuance look like an act of desperation, “our last shriek, on the retreat.” [18] It was decided to wait for a Northern victory so that the Emancipation could be issued from a position of strength.

Striving for a game-changing victory became the priority for both sides. The summer of 1862 witnessed a series of brilliant Confederate victories. British Prime Minister Palmerston agreed to finally hold a Cabinet meeting to formally decide on recognition and mediation. [19] General Lee wished to tip the scales further by engineering a Confederate victory on northern soil. In essence, he wanted a victory similar to the 1777 Battle of Saratoga that brought French recognition and aid to America. [20]

The race was on, turning the siege of Harpers Ferry (September 12-15, 1862), the Battle of South Mountain (September 14, 1862), and Antietam (September 17, 1862) into the only battles of the war that had global impact. The final battle of Antietam forced Lee and his army back into Virginia. This was enough for Lincoln to issue his Preliminary Emancipation Proclamation, five days after battle on September 22, 1862. When news of the Confederate retreat reached England, support for recognition collapsed, extinguishing, “the last prospect of European intervention.” [21] News of the Emancipation Proclamation launched “Emancipation Meetings” throughout England. Support for a Union victory rippled through even pacifist Anti-Slavery groups who asserted abolition, “was possible only in a united America.” [22]

Lincoln accomplished an historic Trifecta. He revolutionized the Union war effort by bringing 200,000 blacks into the Union army. He isolated the Confederacy from Europe, making Union victory inevitable. He also strategically shifted public policy within the parameters of constitutional government and laid the ground work for the immediate and universal abolition of slavery everywhere in America by amending the Constitution. For this masterful strategy of removing slavery strictly within the bounds of law Lincoln has been declared America's "last Enlightenment politician". [23]

Scot Faulkner served as the first Chief Administrative Officer of the U.S. House of Representatives and is currently President of Friends of Harpers Ferry National Historical Park. You may read his columns at http://citizenoversight.blogspot.com