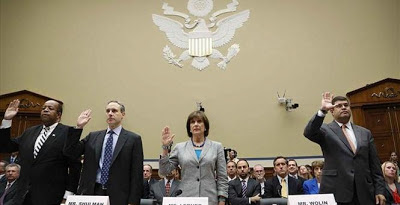 by Scot Faulkner and Jonathan Riehl

IRS, Associated Press, Benghazi - It has been a sad month for America. The Nixonian turn of the Obama Administration has threatened basic liberties and trust, while the turn down the rabbit hole of the Congressional Republicans has undermined basic roles and responsibilities of the Legislative Branch.

Holding power accountable is a vital and fundamental part of America’s civic culture. The First Amendment’s protections for free speech, and Article I of the Constitution outlining Congress’s powers and responsibility to protect the use of public funds, are pillars that hold our government and society together. Recent actions by both the Executive and Legislative Branches raise alarm.

As President Truman famously declared, “the buck stops here” at the President’s desk. No matter how much President Obama declares his innocence; no matter how much the President asserts he only learned about every problem from watching the news; he is responsible for the actions of the Executive Branch. Intimidation of citizens and the media, violations of privacy, violations of law, and covering-up facts are ultimately the fault of the person who sets the tone, and governs, the Executive Branch. If subordinates were “rogue”, then find out who and find out why. No second or third level functionary wakes-up one morning and decides to create national policy without receiving orders or telling others. To maintain otherwise insults the intelligence of all Americans. The alternative is an admission of gross negligence and incompetence emanating from the Oval Office.

The role of Congress is to use its oversight powers and responsibilities to expose and address illegal, unethical, and unseemly acts of federal officials. This oversight role has been an integral part of Congress since President George Washington. It is the key element of balancing powers among the three branches of the federal government.

Oversight is about truth seeking. When Congress uses this power to create fantasy instead of fact it disserves the institution and the public. The egregious performances by Executive Branch officials have unfortunately been equaled by over-the-top rhetoric and drama by Members of Congress. There is a fundamental problem with the rhetorical strategy of the GOP, and it is evident in these recent hearings. When there are failures in the functioning of government, it is up to Congress to investigate and call them to account. In these recent matters at State, Justice, and the IRS, the duty is obvious. It’s how the House majority has gone about it that is so problematic.

This is especially disappointing because Republicans have a strong record on oversight. In recent history, nothing stands out more than the Watergate hearings, to which many allusions have been made.

In 1973, the wrongdoings of the Nixon administration were brought to light by responsible, bipartisan hearings in which we heard memorable lines from the likes of GOP Senator Howard Baker, asking calmly, “What did the President know, and when did he know it?” The stakes were high. The modesty of the questioning allowed for the public to come to its own conclusions. The facts drove the investigation. Chairing the hearings was Democratic Senator Sam Ervin, of North Carolina. While there was certainly shrill demonizing of Nixon and the Republicans by liberals, this rancor was shut-out of the Ervin Hearings.

Republican leaders in Congress have their hands full. When Chairman Issa, and other “adults”, hold sway, the tone of the hearings hearken to the Ervin hearings. However, less seasoned Republicans on these committees, and those speaking on the House Floor, drown out the search for truth with “truther” style rhetoric. No matter how much some Republicans hate Obama, their best strategy is to let the petulance of Executive Branch witnesses drill holes in the Administration’s boat. When Republicans use their interrogation time to spout conspiracy theories instead of fact finding they divert attention from Obama onto themselves. They also waste precious time. They should be asking questions designed to peel back the “onion layers” to expose the rot. There will be plenty of time to assail the Obama Administration, once the facts, or the lies, are in hand.

The poor performance of both interrogators and interrogatees continue Washington, DC’s downward spiral into hyper-partisanship and perpetual campaigning. Every utterance seems aimed at producing the next soundbite for partisan pundits or campaign ads. Congressional hearings should enlighten and build trust, not become a fodder for comedians where the Members are mouthing their own punch lines.

Scot Faulkner served in the Reagan White House and as Chief Administrative Officer of the U.S. House of Representatives. Jonathan Riehl, J.D., Ph.D., is a communications consultant for political campaigns and national nonprofit organizations, a former speechwriter for Luntz Research, and an instructor in Communications Studies.

Posted by Scot Faulkner at 5:52 PM

Excellent article. Recommending to my friends.