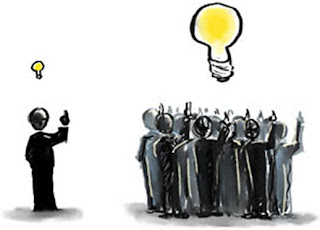 Published in The Washington Examiner
http://washingtonexaminer.com/op-ed-why-not-crowd-source-federal-budget-policy/article/2526579

European and American politicians are in a quandary -- how can they cut spending while avoiding public outrage?

Austerity riots and strikes have become commonplace throughout Europe. In America, the arbitrarily heavy-handed spending cuts, known as the sequester, have reduced voter support for Congress to record lows.

Maybe it is time for governments to copy the private sector. For years, corporations have asked their customers what they want. Business websites and social media are filled with requests for customers to develop new flavors, new products and their own ads.

This digital customer empowerment is called "crowd-sourcing." Imagine if governments asked their voters what programs to cut and by how much?

Direct voter input into spending has existed since the voluntary check-off for funding America's presidential elections was added to income tax returns in the 1970s. What if this check-off procedure expanded into all discretionary spending?

In America, April 15 is Tax Day. Imagine if Tax Day also became Budget Day? The Internal Revenue Service would provide everyone with a budget form that listed all discretionary federal programs.

Each taxpayer would be given a hypothetical $100,000 to allocate for these programs. A pro-forma budget showing how the $100,000 was allocated for the prior fiscal year would provide both a template for taxpayer input and a major learning experience. Imagine if every taxpayer saw how the federal government really spent their money?

The budget forms would be submitted with their tax returns. In essence, there would be a nationwide vote on spending every April 15. Every taxpayer's choices would be totaled, and the percentages of the choices for each program would be applied to the actual federal budget moving through the Congress.

These spending priorities could be immediately binding or be advisory for the first few years. Either way, the Budget Day results would be a major news event. Even advisory choices would be revolutionary if the people's "crowd-sourced" decisions contradict the allocations proposed by Washington's power elite.

As the kinks are worked out, and people became savvier about how to allocate their $100,000, even the advisory referendum could evolve into mandating the spending priorities.

For example, require a two-thirds vote of both Houses of Congress to provide more or less funds than were allocated by the Budget Day results. National disaster assistance and declared wars could be exempted.

The April 15 Budget Day spending vote would become as important as Election Day. Tax preparation companies would develop "neutral" forms for people wanting to keep the same mix of spending each year.

Liberal and conservative interest groups would develop their own budgets for people to use. These would have the same impact as sample ballots. Taxpayers would be free to use them or do their own versions.

A similar process could be launched in European countries. A "budget day" would be created, and voter check-offs would be submitted.

Taxpayer budget choices will have immediate and fundamental impacts. In America, instead of spending their time swaying politicians, the special interests and federal agencies would have to persuade the 132 million people who file tax returns. Similar ripple effects would be felt in Europe as each nation implemented its own "crowd-sourced" budget processes.

Budget Day would open the door to building budgets that have widespread support -- because they would be democratically created. This process would also educate the electorate on the kinds of trade-offs and limitations being faced by politicians, opening eyes and minds to a common understanding and commitment to fiscal sanity.

Scot Faulkner is a former chief administrative officer for the U.S. House of Representatives. His blog is citizenoversight.blogspot.com.

Posted by Scot Faulkner at 8:28 AM

Great idea! It's so simple and obvious that it's truly amazing we haven't thought of it before. We can aggregate the desires of an informed electorate.

Oh wait, don't we already have a mechanism in place to aggregate the desires of the electorate and enact legislation accordingly, sorta like a representative democracy, with a balance of powers to limit abuse? Oh yeah - it's that "government" thing we want to shrink and defund. :|

Crowdsourcing a budget has about as much chance of working as crowdsourcing legislation (and look how well that works for California).

The underlying issue raised in the article is that people don't like the gridlock in Washington. Yet, the gridlock in Washington exists because it is in the self interest of the two political parties for it to be there. Don't like it? Either get a third party (seriously easier said than done), or change how the parties behave (much easier since congress tends to be skittish and they don't like be "unelected").

The real problem is legislators following the money and voting for special interests, instead of seeking compromises to forward their constituents' needs. Crowdsourcing a budget will not address that problem because the will of the majority is too blunt a tool for policy and direction. There is a valid reason for, and often incredible benefits, to unpopular programs which could not survive the model you propose.

Wait - there's the real problem. Immediate gratification takes too long, and we forget by the next election that we actually asked them to do that. :(

- a system like this is a proportional vote. As such, a minority would actually have a voice unlike the current winner take all system
- simpler way to handle this would be to allow some portion, say 10% of your income, to be a tax credit for donations to non-profits. This may require a new class of non-profits, that are required to be transparent and regularly audited