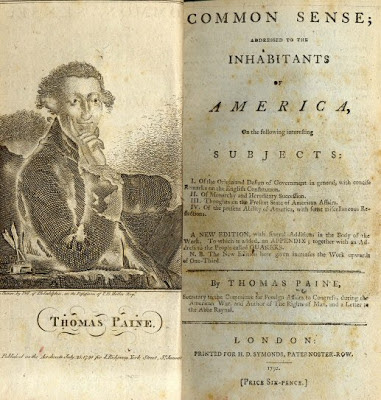 As 1776 began, America’s rebellion against British colonial rule was not yet a revolution. Less than half the projected number of volunteers had enlisted in the Continental army with desertions mounting. George Washington was entrenched, but stalemated in Cambridge outside of Boston. The British Commander, General John Burgoyne, mocked the situation by writing and producing the satirical play, “The Blockade”, which portrayed Washington as an incompetent flailing a rusty sword. Then something amazing happened.

“Common Sense” was published on January 9, 1776. It remains one of the most indispensable documents of America’s founding. In forty-eight pages, Thomas Paine accomplished three things fundamental to America. He is the first to publically assert the only possible outcome of the rebellion is independence from Great Britain. He makes the case for American independence understandable and accessible to everyone. He lays the ground work for the Declaration of Independence and the U.S. Constitution.

Paine is both the most unlikely and likely person to accomplish this pivotal Trifecta. He was born in rural England on January 29, 1737, the son of a Quaker father and an Anglican mother. This religious diversity formed a key part of his early writings on religious freedom. His career was a mixture of failed business ventures, failed marriages, and minor positions in British Excise (tax) offices. This mix of mundane activities masked the brilliant mind of an outstanding observer, thinker, and communicator.

In the summer of 1772, Paine wrote his first political article, The Case of the Officers of Excise, a twenty-one page brief for better pay and working conditions among Excise Officers. The work had little impact on Parliament, but did bring him to the attention of political thinkers in London, and ultimately to being introduced to Benjamin Franklin in September 1774. Franklin recommended that Paine immigrate to Pennsylvania and commence a publishing career. Thomas Paine arrived in Philadelphia on November 30, 1774 and became editor of the Pennsylvania Magazine in January 1775.

Editing the magazine gave Paine two major opportunities. He honed his writing skills for appealing to a mass audience and he befriended those opposing British colonial rule, including Benjamin Rush, an active member of the Sons of Liberty. After open rebellion erupted in April 1775, Rush was concerned that, “When the subject of American independence began to be agitated in conversation, I observed the public mind to be loaded with an immense mass of prejudice and error relative to it”. He urged Paine to make the case for American independence understandable to common people.

Common Sense was just that. Paine laid out methodical and easily understood reasons for American independence in plain terms. Up until Common Sense those opposed to British rule did so only in lengthy philosophical letters circulated among intellectual elites.

Common Sense ushered in a new style of political writing, devoid of Latin phrases and complex concepts. Historian Scott Liell asserts in Thomas Paine, Common Sense, and the Turning Point to Independence: "[B]y including all of the colonists in the discussion that would determine their future, Common Sense became not just a critical step in the journey toward American independence but also an important artifact in the foundation of American democracy.”

Paine’s simple prose promoted the premise that the rebellion was not about subjects wronged by their monarch, but a separate and independent people being oppressed by a foreign power:

"Europe, and not England, is the parent country of America. This new world hath been the asylum for the persecuted lovers of civil and religious liberty from every part of Europe. Hither they have fled, not from the tender embraces of the mother, but from the cruelty of the monster; and it is so far true of England, that the same tyranny which drove the first emigrants from home, pursues their descendants still."

Common Sense was an instant bestseller. It sold as many as 120,000 copies in the first three months, 500,000 in twelve months, going through twenty-five editions in the first year alone. This amazingly wide distribution was among a free population of only 2 million Americans.

Originally published anonymously as “Written by an Englishman”, word soon spread that Paine was the author. His authorship known, Paine publically declared that all proceeds would go to the purchase of woolen mittens for Continental soldiers. General Washington ordered Paine’s pamphlet distributed among all his troops. Within the year, Paine became an aide-de-camp to Nathanael Greene, one of Washington’s top field commanders.

Common Sense was not only read by the masses, it was read to them. In countless taverns and local gatherings Paine’s case for American independence and for a unique American form of government was heard even by common folk who had never learned to read.

The masses heard and embraced the concept that, “A government of our own is our natural right”. They also heard and understood the foundations of America: Government as a “necessary evil” formed and maintained by the will of the governed - “in America THE LAW IS KING. For as in absolute governments the King is law, so in free countries the law ought to be King”; and the need for an engaged electorate, “this frequent interchange will establish a common interest with every part of the community, they will mutually and naturally support each other, and on this, (not on the unmeaning name of king,) depends the strength of government, and the happiness of the governed.”

While the Declaration of Independence became the philosophical core of our Revolution, Common Sense initiated and broadened the public debate about independence, building the public commitment necessary to make our Revolution possible.

Posted by Scot Faulkner at 1:23 PM

Don’t forget another good way of simplifying your writing is using external resources (such as WritePaper.Info ). This will definitely make your life more easier