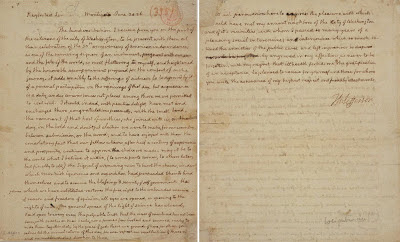 Published as part of Constituting America's "constitution reader" series
"90 in 90: History Holds The Key to the Future" in cooperation with Hillsdale College.

My podcast for Constituting America http://soundcloud.com/constituting-america/essay-17

In the last public communication of his life, Thomas Jefferson made it crystal clear why documents and actions have lasting consequences. In his letter to Washington, DC Mayor, Roger C. Weightman, Jefferson eloquently asserts the legacy of the Declaration of Independence by declaring it: “the signal of arousing men to burst the chains under which monkish ignorance and superstition had persuaded them to bind themselves, and to assume the blessings and security of self-government.”

Jefferson was a student of history. He understood its central role in our present and future. Earlier he wrote: “History, by apprising them of the past will enable them to judge of the future; it will avail them of the experience of other times and other nations; it will qualify them as judges of the actions and designs of men; it will enable them to know ambition under every disguise it may assume; and knowing it, to defeat its views.”[1]

On June 24, 1826, Jefferson knew he was dying. His ailments had been slowing him down since the beginning of the year. He hoped to communicate a timeless legacy of liberty to others. He also hoped to survive until July 4, the fiftieth anniversary of the Declaration of Independence. On that June morning he had summoned Dr. Robley Dunglison to help him live just a few more days and then to ease his journey to, “the shore which crowns all my hopes or which buries my cares.” [2] He then completed his letter to Weightman.

Mayor Weightman had invited all surviving signers of the Declaration of Independence to a major celebration in Washington, DC. Jefferson knew his infirmities would prevent his attending, but he viewed responding to Weightman’s invitation as a valedictory – a final farewell to inspire people to seek freedom for ages to come.

Jefferson opens by making his apology for not being able to attend. He then frames the fiftieth commemoration of the Declaration of Independence as vindicating the actions of the signers in 1776: “the remnant of that host of worthies, who joined with us, on that day, in the bold and doubtful election we were to make for our country, between submission or the sword; and to have enjoyed with them the consolatory fact, that our fellow citizens, after half a century of experience and prosperity, continue to approve the choice we made.”

He shifts his focus to the broader themes of July 4th. He affirms the eternal value and inspirational message of the Declaration of Independence as, “the signal of arousing men to burst the chains.” Jefferson then writes about the how the Declaration not only launched the first successful revolution based solely on freedom, but also established timeless values for creating a noble new civic culture, “That form which we have substituted, restores the free right to the unbounded exercise of reason and freedom of opinion.”

He goes on to describe the universal impact of the Declaration, “All eyes are opened, or opening, to the rights of man.” Jefferson deeply desired that an expanding universe of freedom and knowledge would lift everyone on earth out of tyranny, “The general spread of the light of science has already laid open to every view the palpable truth, that the mass of mankind has not been born with saddles on their backs, nor a favored few booted and spurred, ready to ride them legitimately, by the grace of God. These are grounds of hope for others.”

Jefferson closes with a recommendation for the ages, “For ourselves, let the annual return of this day forever refresh our recollections of these rights, and an undiminished devotion to them.”

As Jefferson envisioned, July 4 should always be about more than parades, fireworks, and barbeques. It is about refreshing our recollections of our freedom being “self evident” and our “unalienable Rights” arising from our “Creator” never to be abridged by any earthly power. The sole role of government is to “secure these rights,” deriving its just power, “from the consent of the governed”.

Jefferson lived to see the sunrise on America’s fiftieth birthday, passing just before one o’clock in the afternoon on Tuesday, July 4, 1826. Later that day, Jefferson’s colleague and co-author of the Declaration of Independence, John Adams, also passed. Adams’ last words were, “Thomas Jefferson lives”. And so he does.