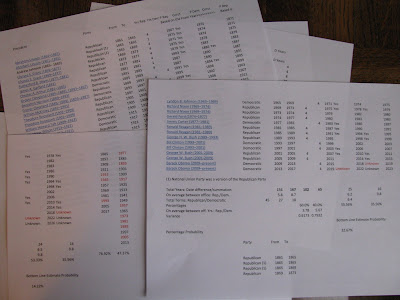 I am writing this blog to offer optimistic thinking to the Republican Party: maybe there is a chance of winning the 2016 presidential election – but not necessarily because of anything that the Republicans may do. It has occurred to me that over the years the baton for the office of President has been passed back and forth between the Republican and Democratic parties. I was curious as to what the relationship was between the years. The more studious historians will, of course, have many explanations of why elections are won and lost: employment or unemployment; interest rates; tax policies; disposable income and voting one's “wallet”; monetary policies; balance of trade; deficit reduction; quantitative easing; wars; the list goes on and on. And I agree with them: there have got to be logical, motivating factors that drive people to the polls to vote for one candidate or the other. But I also thought about the cyclical swings: today a Republican, tomorrow a Democrat. This mood of the country – the zeitgeist – manifests itself in the actual electoral outcome.

When I started to write this blog, my intuitive feeling was that there has to be a political cycle that causes these swings; the questions are what is this cycle and is it predictable? I have decided to call this behavior Political Hysteresis: the tendency of an electoral outcome to vary about the central tendency of moderation based upon past and current candidates for the office of President. Granted, it is the candidate’s position and the Party's platform that drive the election. However, I would like to propose a simpler reason: hysteresis. “Hysteresis is the dependence of a system not only on its current environment but also on its past environment….To predict its future development, either its internal state or its history must be known.” http://en.wikipedia.org/wiki/Hystersis]

What if we look at the history of Presidential elections to try to determine if there is a central tendency throughout time? I found the perfect analogy under the Control System definition of hysteresis to explain how this might apply to the election cycles; think like a thermostat and a heating system. The analogy is the following. The election is the thermostat. The unit “on” is the Republican Party (conservative) candidate; the unit “off” is the Democratic Party (liberal) candidate. The actual temperature is the electorate. And the value the thermostat is set at is the mood of the country. The temperature rises (conservative), the unit shuts down; the temperature cools (liberal), the unit turns on. But the question – which is really food for thought since this is not a scientific presentation – is: using political hysteresis, who's going to win the election in 2016?

I would like to share some of the results of my analysis. Using the 156 years from 1861 (the beginning of the Republican Party) to 2017, the average years between officeholders is 5.8 for Republicans and 8.7 for Democrats. Allowing for terms with the assassinations that occurred during this time, the total number of terms is 45: 27 were Republican and 18 were Democrat. Republicans were in control 60% of the time, and Democrats were in control 40% time. 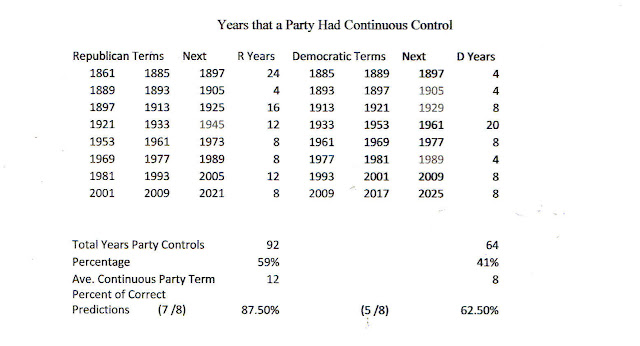 The lessons to be learned: 1) Barring voter registration fraud, stuffing the ballot box, and the Republicans managing to snatch defeat from the jaws of victory, political hysteresis smiles favorably upon a Republican Party win in 2017. 2) It appears that voters generally prefer a Republican as President; they just need a Democrat once in a while to remind them why….
Posted by Scot Faulkner at 3:25 PM