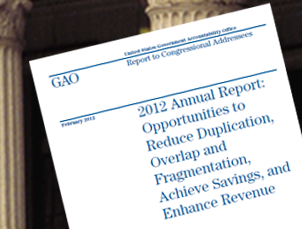 America should be having a serious discussion on the size and cost of our Federal Government, and what to do about a debt burden that has already sailed our nation off the fiscal cliff. Instead, disinformation has buried what little integrity is left among the participants.

Senator Mary Landrieu (D-LA) recently spoke on the Senate floor: "I am not going to keep cutting the discretionary budget, which by the way is not out of control, despite what you hear on Fox News."

There are many reasons why Senator Landrieu is wrong. In fact, there are 9,528 reasons. That is the approximate number of audits and investigations conducted by career employees during 2012 on federal programs, projects, agencies, and contracts. The General Accountability Office (GAO) issued 768 reports, which contained 1,807 recommendations for operational improvement. One can also glean from public documents approximately 8,760 audits and investigations conducted by the 73 Inspector General Offices among the cabinet departments and independent agencies of the Executive Branch.

Every one of these 9,528 efforts found waste, fraud, and abuse. Every one of these reports identified opportunities for improving operations and made specific recommendations. The Department of Labor’s Inspector General’s Office conducted 66 audits that identified $2.4 billion in waste. The office also opened 585 investigative cases, obtaining 633 indictments and 433 convictions. They also recovered $398 million that had been criminally diverted. There is similar documentation of mismanagement, inefficiency, and ineffectiveness within every report issued by the GAO and the 73 Inspectors Generals. In 2012, these reports documented over $650 billion in waste. That translates into at least $6.5 trillion in possible spending cuts, over the next ten years, without harming one legitimate beneficiary of government services.

Everyone should be upset that even one penny of tax dollars is misspent. That goes for whether you love a program/project or hate it. Unfortunately, no politician or pundit is willing to rise above their partisan mud-wrestling to think about our country. In rare situations the level of corruption and dysfunction created a bipartisan mandate for strategic change. This happened at the General Services Administration in the early 1980s when years of multi-million dollar criminal activity, and 48 convictions, allowed for a top to bottom rethinking of the agency. The result reduced staff by 20,000 and saved $3 billion. This also happened in the House of Representatives in the mid-1990s when high profile scandals, and the first change in party control in forty years, allowed for a fundamental reinventing of Congressional operations. The result cut support staff by 48%, established financial integrity, and saved $148 million.

Times have become too partisan to start with strategically rethinking Executive functions and management. It would be horrendous to wait for epic scandal or corruption to trigger another brief moment of bipartisan cooperation. What we are left with is cajoling everyone to admit there is “room for improvement”. Senators and Congressmen have 9,528 reports, generated by objective, nonpolitical, professionals to guide where and how to cut waste. Once the recommendations are implemented, and the management improvements are in place, they can debate whether to reallocate the savings. In the meantime, America’s debt bomb will be partially defused without harming programs, services, or recipients.

Can we all agree that this would be a great way for Congress to spend the next two years?

Great points. So my question is how do we get this accomplished?