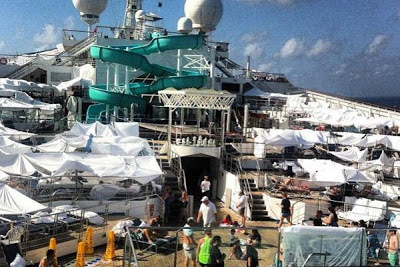 What happened to the Carnival Cruise Ship Triumph was anything but. It has already been labeled “Ship of Stools” by Jon Stewart.

What happened to the 3,143 passengers is terrible. Worse – everything that happened could have been avoided.

Mistake #1 - Putting to sea
Carnival Triumph was a flawed ship. A vessel inspection was conducted on January 28, 2013 by the Texas City, TX, U.S. Coast Guard Marine Safety Unit. This revealed "a short in the high voltage connection box of one of the ships generators causing damage to cables within the connection box." Carnival had until February 27, 2013 to resolve this deficiency.

This citation should have caused great concern. There had been three previous engine room fires on Carnival owned ships resulting in a loss of power: the Tropicale in 1999, the Carnival Splendor in 2010, and the Costa Allegra, owned by a Carnival subsidiary, in 2012.

Instead of resolving the issue immediately, Carnival executives choose to put to sea and repair the problem upon the Triumph’s return to port.

Mistake #2 - Keeping everyone on board
On Sunday morning, February 10, 2013 a fire occurred in the aft engine room. The fire was automatically extinguished, but the Triumph lost power and propulsion. The emergency generator provided some power, but the ship was adrift about 150 miles off the coast of the Yucatan Peninsula in the Gulf of Mexico.

Carnival Triumph was originally expected to be quickly towed to the Mexican port of Progreso. Unfortunately, Gulf currents took the stricken ship north prior to the arrival of seagoing tugboats. Therefore, Carnival Executives went for Option B, a longer journey to Mobile, Alabama.

Carnival Elation arrived next to the Triumph Sunday night of February 10. Many of the 3,143 passengers could have been transferred and arrived in Progreso within hours. This did not happen.

Carnival Legend arrived next to the Triumph around 3:00 p.m. on Monday February 11. Once again passengers could have been transferred and, in this case, arrived in Tampa the next day. This did not happen.

Emptying the Triumph would have simplified everything and avoided four days of hardship. Two large fully operational cruise ships could have coordinated using their pilot and life boats to transfer passengers. Instead they opted to transfer food and water to the Triumph.

Mistake #3 – Not enough provisions
Once the decision was made to keep everyone on board, little was done to maintain a relatively sanitary and comfortable environment.

If one has to be adrift, the Gulf of Mexico is the best possible place. Hundreds of helicopter transport and industrial support companies ring the Gulf. They exist to support the hundreds of off-shore drilling and pumping platforms and their oil company crews. Why weren’t helicopter shuttles bringing Port a Potty units to be placed on the top decks? Why weren’t helicopters bringing sufficient food and water? Off-shore crews are provisioned regularly and can be mass evacuated when a hurricane draws near. So why overlook this established support system?

Mistake #4 - No leadership
The Triumph was adrift both literally and figuratively. Passengers complain about not being informed and no one being in charge. Front line crew was given credit for being helpful and cheerful, but where were the Captain, Cruise Director, and their top supervisors?

We do know where the CEO of Carnival Cruise Lines was. On Tuesday night he was court side cheering on the Miami Heat, a team he owns. Chief Executive Micky Arison should have been managing the crisis. He should have also been aware of the bad visual he was creating.

A vivid indication that Carnival executives were clueless and hapless was displayed during the Thursday morning news conference held by Senior Vice President Terry Thornton. He announced that passengers would be given two options to getting back home. He should have said something like the following:

“Our crew members have spoken with every Carnival Triumph guest to determine how each would like to return home. Fifty percent have told us they would like to return immediately to Galveston, thirty percent wanted to travel to Houston, twenty percent opted for a complimentary stay in New Orleans, and the remaining ten percent are making individual arrangements once they reach the Port of Mobile. We are making sure all their needs are being met.”

Such a statement (the percentages are hypothetical for this example) would have projected a sincere commitment to respond to guest desires not the other way around.

Mistake #6 - Compliance alone is not enough
Some commentators, including cruise industry experts, commented that Carnival “did more than was legally required”. Really? When you have a brand name to protect, legal compliance should be the “floor” not the “ceiling” of what you should do.

Carnival Cruise Lines is not the first, and will not be the last, company confronted with a crisis. While no lives were lost (unlike the Costa Concord on January 16, 2012), reputations were. Civil suits and tell all books, blogs, and interviews are still to play out.

Carnival Triumph has object lessons for all: prevention is better than crisis; contingencies should always be at the ready; a crisis is not over until it is really over; leaders should work the issue until the issue is resolved, especially when it is CNN’s lead story; communication is always important, but it is of prime importance in a crisis; finally leaders should know that, in this era of Smartphone cameras, actions and inactions will be chronicled - they are always on stage.
Posted by Scot Faulkner at 6:49 PM