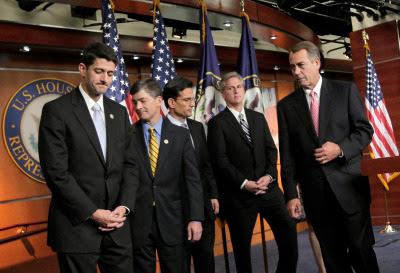 This was published in RollCall
http://www.rollcall.com/news/faulkner_and_riehl_republican_opportunities_lost-222193-1.html?pg=1
By Scot Faulkner & Jonathan Riehl

Republicans are wondering how to confront President Obama’s second term “second wind”. In recent weeks, Obama has proven he is no Lame duck. His new initiatives, new appointments, and winning the word wars on the budget, have overwhelmed Republicans both in Congress and among their pundits. After ceding 789 days of political positioning to their opponents since the GOP’s 2010 victories, Republicans have now spent the first weeks of 2013 contemplating their navels while bungling opportunities to make a difference.

Only in the Republican’s parallel universe could supposedly intelligent people sift through the electoral debris of 2012 and think that their only challenge is creating better campaign ads with better media soundbites. Worse, they arrived at this epiphany after listening to political consultants, who derive their income from creating these campaign ads and soundbites. These are the same consultants who spent hundreds of millions the GOP’s money being 100% wrong in their assumptions, polls, and predictions throughout 2012.

Congressional Republicans in particular should look into the mirror to find who to blame for their current predicament.

Since decisively winning the November 2, 2010 elections, Republicans in Congress and their acolytes in the conservative media, have missed hundreds of days of opportunity to define themselves and present compelling alternative policies. The reality is that Republicans have no platform. In fact, they no longer have a coherent idea of who they are. They are also so “inbred” in their politics that they no longer see the need for making a rational case for any of their stands. There is simply no content behind their message.

The dreadful examination of Sen. Chuck Hagel is a case in point. Hectoring diatribes from fellow Republicans over the war in Iraq only perpetuate the image of conservatives unwilling to reflect on their actions in light of the facts. Never mind that as a traditional conservative, Hagel’s view on the Iraqi misadventure was much more in line with decades of conservative thinking prior to the NeoCon takeover of GOP foreign policy.

The recent Pew Survey shows Americans disapprove of Republican Congressional leadership by 66% while only 19% approved. That is a staggering 47 point negative. Gallup’s survey is equally horrific, with 25% approving and 67% disapproving for a 42 point negative gap.

These dreadful scores are only part of the problem. President Obama and Congressional Democrats are framing the Fiscal Cliff/Debt Ceiling/Budget battle in ways highly favorable to their cause while painting Republicans into a microscopic corner. This is smart rhetorical strategy, and stands to marginalize the GOP into oblivion.

Politics often comes down to defining the terms of battle, something both parties have excelled at during different moments in history. Democrats have the upper hand at this particular moment. Republicans, even moderates (those few that remain), are now called “extremists.” Democrats, even radicals, are now called “Progressives." Government spending is now called “investment,” thanks to a spin factory gem from Bill Clinton. Spending cuts of any magnitude are dismissed as damaging to America’s economic recovery. The Republican response is either mired in bureaucratic language unknowable to normal people, or piled up with hyperpartisan rhetoric that leaves no room for compromise.

As the Hagel hearing demonstrated, Republicans have been vague about government waste and the need to cut spending. They trumpet their ideology, but ideology is not governance -- and Americans continue to see the President as more competent in that task. The problem is that the GOP never issued a meaningful indictment or offered a prosecution brief. It is also sad that Republicans refuse to admit that the bureaucracy and spending at the Pentagon are as bloated as any other department. Republicans seem to fixate on shiny objects, like rows of medals on uniforms, instead of targeting wasteful spending and management at the DOD.

Perhaps this is what the psychologists call cognitive dissonance -- Republicans are now mostly unwilling to hold serious hearings on government spending or mismanagement, because many of them blindly supported Bush-era spending boondoggles both foreign and domestic. Bereft of principle, and caught in hypocrisy of their own making, Republicans have little to stand on. The GOP did not even hold hearings on Senator Tom Coburn’s annual Waste Report, a longtime staple of reasonable oversight. Only CSPAN’s BookTV gave Coburn a proper forum to discuss his exhaustive and highly credible research on government waste.

Having one party dominate policy and legislation while the other retreats into mindless and sporadic venting of anger is unhealthy for America. Those who wish to hold power accountable, and desire a reasonable dialogue on the role and cost of government in the 21st Century, must stage an intervention. The elephant is sick and its infirmity harms all of us.

Posted by Scot Faulkner at 1:09 PM