Why Visit A Civil War Battlefield? 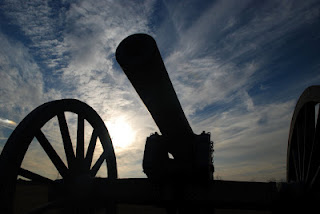 This article appeared on http://www.hnn.us/articles/138312.html
The audio version of this article is at http://www.wvpubcast.org/newsarticle.aspx?id=19791

April 20, 2011 · “A war was fought. The right side won. What else do we need to know?” That person’s comment was recently posted on one of my websites.

Americans have been commemorating the 150th anniversary of our Civil War since October 16, 2009. On that date in 1859, a cataclysmic event wrenched America into its bloodiest war.

John Brown’s Raid on Harpers Ferry, was the “September 11” of the 19th Century. Commemorating the actual war began on April 12, 2011 – the sesquicentennial of the bombardment of Fort Sumter in Charleston harbor, South Carolina.

What should we do to remember a four-year war that ended slavery, reunited a country, but also resulted in 1,030,000 casualties (3 percent of the U.S. population), including 620,000 soldier deaths?

We have already seen its politicization by both extremes – souring general interest in the era. This proves that America’s Civil War continues to leave deep legacies, and scars, on our nation’s physical, political, and psychological landscape.

As the weather warms, why should people spend their limited recreation and reflection time visiting a Civil War battlefield?

History enthusiasts have long studied America’s Civil War. Its first battles echoed Napoleon’s wars while the last ones anticipated the bloody trench warfare of World War I. A full century of change in military technology and dogma was compressed into four years.

Those who study management have for years looked to the Civil War for timeless lessons in problem solving, planning, communication and leadership. The Civil War offers countless examples of brilliance and stupidity that provide insights into modern business, government and life.

Why should everyone else visit a battlefield?

First we as a nation, and as individual citizens, need to remember who we are and why we are. America’s Civil War was not some arm wrestling contest where the winner took all. It was a time when everyone in this nation - from founding families to new immigrants – was impacted by its violence.

Why America is what it is today was shaped more by the events of April 12, 1861 to April 9, 1865, than any other time period, including World War II. Walking on ground, that was fundamental to shaping our national identity and culture offers insights beyond any book, movie or television show.

Most Americans in 1860 had not traveled more than a day’s walk from their home. The Civil War unified our nation while it was tearing it apart. Northern and Southern soldiers, alike, saw parts of the country for the first time as well as encountered other ethnic and national groups.

Those left on the home front read and learned about new people and places more than at any time prior to the war. No other set of events moved America from a country of isolated communities into a national identity.

The events of the Civil War shaped a generation of citizens who led America into the 20th Century. Some who served in battle went onto become Presidents, Cabinet Members, Congressmen, Senators, Governors and Judges. Understanding their experiences helps us understand the political and social forces at work in America up to and beyond today.

Walking on a battlefield is a window into our past. Many battlefields have preserved the landscape and structures of an earlier era. Seeing what others before us saw is the closest we may come to a time machine. It opens our minds to why things happened and why things are happening.

Walking on a battlefield with your family offers opportunity for learning and dialogue. Young people may ask why a road, railroad, or town was located where it was. This stimulates curiosity that leads to learning. Enough experiences and questions can prepare a young mind to become an engaged and thinking adult.

Reflecting on our past and the “why” that underlies previous actions develops life skills that will well serve a person in their professional, personal, and community endeavors.

Walking on a battlefield is also about recreation and open spaces. Formal parks and sports venues cannot provide the nonlinear joy of wandering. Those of us on the East Coast do not have as many natural national and state parks as the west. Historical parks, and battlefield parks in particular, give us an opportunity to “amble”.

As John Muir once stated, “Everybody needs beauty as well as bread, places to play in and pray in, where nature may heal and give strength to body and soul”.

During the next four years there will be many commemorative events designed to honor those who fought in America’s Civil War and to grapple with their complex actions and motivations. These special events will add additional activities and insights to our battlefields. Whether you plan a battlefield visit to take advantage of Sesquicentennial-themed gatherings or just go to a site that is nearby, you and your family will be richer for the experience.

Posted by Scot Faulkner at 1:49 PM