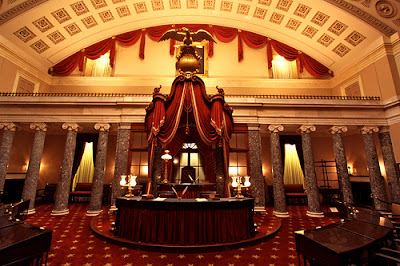 This article was published in Constituting America
http://www.constitutingamerica.org/blog/blog/category/guest-constitutional-scholar-essayists/scot-faulkner


Neither House, during the Session of Congress, shall, without the Consent of the other, adjourn for more than three days, nor to any other Place than that in which the two Houses shall be sitting.

The Constitutional Convention of 1787 made sure the two Congressional chambers had equity when it came of the operations of the Legislative Branch. Neither the House nor the Senate may adjourn for more than three days (excluding Saturdays, Sundays, and holidays) without the concurrence of the other Chamber. The formal end of a Congress is when the Legislative Branch adjourns “Sine Die” (from the Latin “without day”) meaning “without assigning a day for a further meeting or hearing”. The Constitution [Article 2, Section 3] also grants the President the authority to summon the Congress for a special session if circumstances require. The Twentieth Amendment to the Constitution also sets a formal start and end time for each Congress.

These various provisions have led to numerous unintended consequences.

One of the first instances was when the Southern states seceded from the Union. They deprived the sitting Congress of a quorum. In order to continue governing, President Abraham Lincoln issued the very first Presidential Order on April 15, 1861, Executive Order 1.

The most complex consequence of Clause 4 relates to when Congress takes a recess and when it adjourns. A recess is a temporary halt to activity on the floor. Everything stops, and when the recess ends, the chamber resumes from where it left off. A recess might last 10 minutes or it might last weeks. The length of time does not matter. An adjournment is a formal end to business in the chamber, and upon return the chamber does not resume from where it left off. Just like a recess an adjournment can be for one minute or for three weeks. However, unlike a recess, an adjournment creates a new legislative day (this is more relevant to Senate proceedings).

Certain things happen, under the standing rules of the House and Senate, precisely because it is a new legislative day. Much of it is routine business: the reading of the previous day’s journal, filing of reports, delivery of messages from the House, etc., but there are also consequential things. In the Senate, during the first two hours of each new legislative day, motions to proceed are not debatable, and therefore cannot be filibustered.

Any formal break in Legislative Branch activity also opens the door for a President to take certain actions. This includes making appointments which require Senate confirmation, and “pocket vetoing” legislation. A pocket veto means that the Congress cannot override the veto because it is not in session. An adjournment of the Legislative Branch also allows the President to reconvene Congress for a specific action [Article 2, Section 3]. Congressional leaders have devised ways to avoid inadvertently unleashing Presidential activism.

The Congress can take a break from legislative activity, and still avoid a formal recess or adjournment, by meeting in a “pro forma” session. Pro forma means “for the sake of formality”. In recent years pro forma sessions have prevented Presidents from making recess appointments, and in the case of President George W. Bush in 2008, deprived him calling a special session to reauthorize the Protect America Act and the Foreign Intelligence Surveillance Act.

As long as a Member convenes either the House or Senate to formally open and close a session there is no recess or adjournment. Members sometimes compete to see how fast they can conduct a pro forma session. The record is currently held by Senator Jack Reed of Rhode Island who completed the task in 12 seconds.

Posted by Scot Faulkner at 7:45 PM