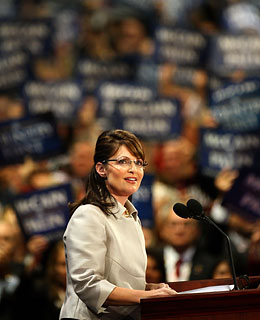 The Mainstream Media (MSM) has always viewed Republicans, and more specifically conservatives, like anthropologists discovering a lost tribe in the Amazon. They are amazed they exist at all and never fully understand their culture, traditions, and language. This is why the MSM totally missed the story of the week - things are finally looking up for the Republican Party.

Alaska Governor Sarah Palin burst onto the scene on Friday, August 29. Many in the media groused about McCain upstaging the afterglow of Thursday night’s Obama extravaganza. No matter what day McCain selected his running mate, the media would have found fault in any McCain announcement - other than a concession statement.

The MSM expressed amazement at the choice of Palin. Just like Obama’s “veepstakes”, the MSM had created their own “short list” for Vice Presidential candidates, out of thin air, and then proceeded to chase their own rumors for weeks. Had the media actually been following the campaign they would have discovered that McCain’s managers had been quietly recruiting female staff for the future Vice Presidential choice since mid-July. You don’t create a new staff, especially a mostly female staff, if the choice was going to be anyone with an existing campaign operation, like a former male rival.

The MSM immediately attacked Governor Palin with a ferocity not seen since the final days of Watergate. Their laudatory declarations for Obama’s “change over experience” were turned upside down in order to fire torpedoes into Palin. Pundits who championed Representative Geraldine Ferraro’s Vice Presidential bid in 1984 contradicted themselves to score points against Palin. What seems to be wonderful for a liberal cannot be tolerated in a conservative.

Palin is only part of this week’s bigger story. The GOP had been drift since 1996. The corrosiveness of the Bush dynasty had driven many activists into early retirement. Some even voted straight Democrat in 2006 just to express their outrage against those blinded by party discipline. The failure of the Republican Congressional revolution and the big government, foreign adventurism of Bush 43 had demoralized the ranks. As 2008 unfolded the poor Republican field led to the static campaign of Senator John McCain. There was little hope that real conservatism, let alone victory, was possible for a generation. By July 2008 a number of conservative insiders were projecting an Obama win of up to 320 electoral votes.

Then this last week happened. Governor Palin ignited the conservative and Republican base. The MSM got it totally wrong - it was not about abortion, Christianity or small town values. It was about a Republican leader able to move beyond partisanship to actually change government. Palin fought Alaska’s Republican establishment, defeating their top leaders and firing their legions of corrupt flunkies. Palin broke out of the partisan prism that had destroyed the modern GOP. She realized that both donkeys and elephants defecate and that crap is crap no matter who creates it. Her crusade for open, honest, efficient government earned her 82 percent support among her fellow Alaskans.

Just after the Palin announcement, Governor Bobby Jindal of Louisiana, stepped onto the national stage. Hurricane Gustav was threatening a reprise of the death and destruction wrought by Hurricane Katrina, whose anniversary was eerily three years ago this last weekend. Jindal’s amazing grasp of details, and clear, commanding, communication style eased everyone’s fears and quickly became a symbol of modern leadership. Jindal’s own life-long crusade against one of the most corrupt governments in America has earned him 77 percent support from a grateful citizenry.

So, when the Republicans convened in St. Paul, they were resurrecting themselves from the depths of despair. They were no longer resigned to going through the motions toward ultimate defeat and a return to the political wilderness. They were vibrantly preparing themselves for possible victory and the knowledge that a new generation of ethical crusaders, like Palin and Jindal, may lead them to a bright and dynamic future. The lost tribe had found new hope.
Posted by Scot Faulkner at 2:30 AM