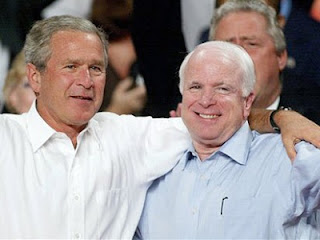 The Republican Convention is over and the sprint to November 4 has begun. The next sixty days will not be dominated by two sets of candidates, but by two numbers.

The final avalanche of balloons had not yet been unleashed when the pundits and Obama surrogates began their drumbeats about Senator John McCain voting for Bush Administration policies ninety percent of the time. Lashing McCain to the mast of Bush’s sinking ship has been in the Democrats playbook for months. They are banking on history. Only three candidates have created a “third term” in their own right since Reconstruction – Taft, Hoover, and Bush 41 [see my Blog “GOP Dilemma” from February 9, 2008].

The key issue is whether McCain actually represents a third term for Bush. Pundits forget that this election is the first one since 1928 where neither Democrats or Republicans had a clear heir apparent. This is one reason this election cycle has had so many twists and turns. McCain ran against Bush 43 in 2000 and presented a clear choice from Bush. Over the last seven years, McCain has trimmed his reformist sails to garner Republican support. This paid-off with McCain gaining the Republican nomination early in the primary season.

This is where Thursday night’s introductory film provided a moment of unintended irony. “When you have lived in a box, your life is about keeping others from enduring that box.” This was about McCain’s ordeal as a Prisoner of War. But it could also be a metaphor for his years of supporting President Bush. He lived in the conceptual box created by the Washington elite and the Bush presidency. He won the nomination remaining inside that box. He is now breaking out of that box, thinking outside that box, and reaching outside that box, so Americans do not need to endure another four years of that box.

McCain’s selection of Alaska Governor Palin was the first clear sign that he was returning to his reformist roots [see my Blog “A New Hope” September 3, and “Palin in Perspective” August 29]. His acceptance speech was extraordinary. He assailed the Bush administration and once again became the reformer of 2000. McCain’s new platform of reform and change was met with a mixture of applause, silence, and skepticism. Too many Republicans are still drinking from the Bush Kool-Aid vats – still unwilling to break free from their partisan prisms to admit to the epic failures of Bush and his Administration.

Liberal pundits and Obama surrogates are being disingenuous in repeating “90%” ad naseum. McCain has left that box behind. His actions and rhetoric are now about the future, “We have to catch up to history, and we have to change the way we do business in Washington”.

I am as skeptical as anyone about how politicians will say anything to get elected. This is why you have to look beyond one speech to a lifetime pattern of actions. Most of his career, McCain has been better than his 90% voting record with Bush.

That is why the other number is equally important. The National Journal documents that Barack Obama has supported liberal policies 95.5 percent of the time. Obama’s speeches reach beyond being a dogmatic fringe leftist. This is why he won his party’s nomination and is leading in the polls. However, there is nothing in Obama’s life that shows him as anything other than the most liberal person to ever run for President. His selection of Joe Biden, America’s third most liberal Senator (with a 94.2 score), speaks volumes about the kind of change that will be coming under an Obama Presidency.

During the next sixty days, McCain will be bombarded with his 90% support of Bush. He must continue to prove that his breakout from the Bush box is real and that he is once again the reformer he always was. The Mainstream Media must also make Obama answer for his 95.5% liberal record. Americans need to look at each candidate’s lifetime of actions before they decide which version of change they are really going to get.
Posted by Scot Faulkner at 7:44 PM