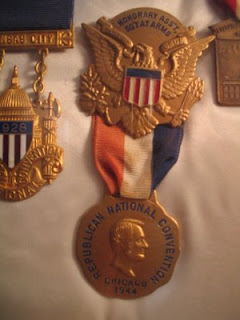 The Republican’s held their 1944 National Convention in Chicago from June 26-28, 1944. This was at the height of World War II. It had been only twenty days since the allied landings in Normandy. War did not curtail our democratic processes, but adjustments were made. Metal was needed for the war effort; so cardboard badges replaced the elaborate officer medals worn at previous conventions.

This story of our democracy adjusting to changing circumstances is playing out at the Republican National Convention in St. Paul, Minnesota. Hurricane Gustav was predicted to be a category 4 “storm of the century” when Senator John McCain and Republican leaders scaled back their first day session. Modern conventions have become mostly infomercials, but they still serve a fundamental legal purpose of certifying the party’s nominees. This is a requirement for being on the general election ballot in most states.

McCain and the GOP did the right thing. The level 2 hurricane that plowed into the Louisiana coast is still causing billions of dollars of damage and destroying people’s homes and livelihoods. This is not the time to see party officials firing political spitballs at the opposition.

As of this writing the New Orleans levees are holding. Hurricane Katrina breached its first levees within two hours of hitting the city on August 29, 2005. The major levees were battered for nearly eight hours before they gave-way.

The GOP still needs to continue its adjustments in the wake of Gustav. The convention’s communications infrastructure could be retooled for fundraising phone banks. Food from the various receptions could be donated to evacuee centers. The existing line-up of entertainers could be reconfigured for a telethon later in the week.

The Republicans need to balance conducting their official business, and communicating their election message, with caring for those in need. How well they strike that balance will tell their story better than any speaker.
Posted by Scot Faulkner at 5:17 PM