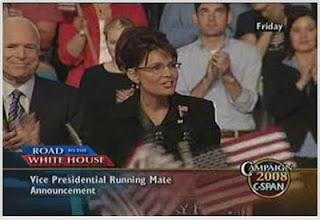 The selection of Alaska Governor Sarah Palin as the Republican nominee for Vice President brings the first real executive experience to either national ticket.

I first raised this issue during my book tour in March. I was worried that the compressed primary schedule pushed most of the presidential campaign into 2007. This gave “home field advantage” to the Washington elites. The 2007 race for media attention and money was the domain of lobbyists and special interests. The result was three Senators becoming the front-runners – Clinton, McCain and Obama.

Senators are the ultimate Washington insiders. They are all millionaires. Their primary goal is to produce volumes of media releases and rhetoric. Their $2 million operating budgets and 20-35 staffers are managed by a chief of staff with fully delegated powers. It is rare for a Senator, from either party to have any executive experience. The last all-Senate ticket was Kennedy-Johnson, who ushered in one of the most turbulent and tragic decades in America history (only surpassed by the Civil War and Depression eras).

America now has hope. Governor Palin is a chief executive officer who leads 15,000 state employees, and oversees a $1.5 billion budget. This means she spends her days making real decisions that impact the daily lives of Alaskans. This is the real world, not the surreal one of Washington power players chronicled in my book “Naked Emperors”.

Palin is a real reformer with real results. She is all about taking tangible actions to clean-up government and make it more efficient. In every elected office, she has led successful change efforts to reduce waste, help whistle-blowers, and fight corruption.

Washington, DC is long over-do for a major overhaul. This is why “change” has become an overused slogan during this campaign cycle. In most cases, this is just empty rhetoric. Obama and Biden mouth great platitudes about change, but never did it. McCain has led legislative change, but has not been in a position to implement it. Palin is the “real deal”.
Posted by Scot Faulkner at 3:05 PM