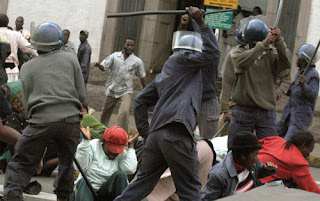 When Rhodesia unilaterally declared its independence on November 11, 1965 the world recoiled. England initiated harsh sanctions that very day. The United Nations Security Council, with the backing of all western democracies, voted sanctions within the week. For fourteen years Rhodesia was a pariah in international circles. The UN passed numerous resolutions denouncing white rule and closing every possible loophole to deprive Rhodesia of outside trade and diplomatic relations. Rhodesia was barred from membership in the UN and all other national bodies. Only other pariah states like South Africa and Taiwan dealt with them openly.

The combination of violence from within and isolation from abroad forced the government of Rhodesia to agree to end its whites only rule. A major agreement with England was signed on March 3, 1979 quickly followed by interim elections in April. The US and other western powers ended their sanctions on June 12, 1979, once the transition to majority rule was well underway.

This history is in sharp contrast to the current reaction to Robert Mugabe’s bloodthirsty rule. Mugabe, whose Chinese-sponsored forces first crushed the whites, then his Soviet-backed rivals, and then the whites again, has always been a dictator. This is not unusual on a continent plagued with numerous sociopathic rulers. What is distinctive is not only how overtly and ruthlessly Mugabe has suppressed the last remnants of democracy and freedom, but that no one is doing anything about it. Of course there is lots of rhetoric and hand wringing. However, on July 1, at the African Union meeting in Sharm El-Sheikh, Egypt, there was Mugabe being seated, and openly meeting with his counterparts. Zimbabwe may be denounced, but its embassies remain open, and its memberships in all international organizations remain intact. No sanctions have been invoked by anyone.

This is the worst kind of hypocrisy. Thuggery is thuggery no matter the color of the despot’s skin. It is shameful that those nations, who so instantaneously and completely isolated Rhodesia in 1965, are now so willing to let empty rhetoric be their only response. The people of Zimbabwe have suffered enough. It is time to take decisive action.
Posted by Scot Faulkner at 10:13 PM