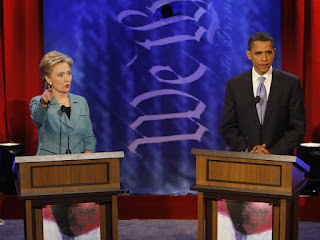 The race for the Democratic Party nomination for President has fixated the “chattering class” in all news venues. Fundamental to this fixation is the mathematical truism that, short of some cataclysmic event, neither Senator Hillary Clinton nor Senator Barack Obama will have enough delegates to win the nomination after the primary season ends in early June.

That leaves two huge loose ends – what to do about the Florida and Michigan delegates and the role of the super delegates. The path to addressing either issue is a minefield waiting to blow-up the Democratic Party’s chances in the general election. Any resolution of Florida and Michigan may still leave both candidates short of the votes needed for the nomination. All roads still traverse the world of the super delegate.

There is a way to elevate the wooing of super delegates away from back room deals and unseemly promises and pay-offs. It could both salvage the nominating process and give the Democrats a “new lease” on their party’s life.

Imagine it is Friday, June 6. All 793 “super delegates” convene in a special convention whose proceedings are open and broadcast to the world (there would still have to be a decision about whether super delegates from Florida and Michigan would be allowed to participate). The first two hours of this convention is a debate between Clinton and Obama on foreign policy. This debate is not moderated; it is one-on-one like the Lincoln-Douglas Debates of 1858. Each candidate is allowed a ten-minute opening statement (order decided by a coin toss). Then it’s a “free-for-all” until each gives a five-minute closing statement (whoever went first in the opening gives the first closing remarks).

The convention takes a short break and then two officials from each campaign take the stage for a ninety-minute debate on the “electability” of their respective candidates. Once again there is a ten-minute opening and five-minute closing statement with an unmoderated “free-for-all” in between.

After another break, the two candidates return to the stage for another two-hour debate on domestic issues under the same ground rules. Who ever opened in the first debate goes second in this debate.

After these three major debates, the super delegates cast, by secret ballot, a nonbinding vote on who should be the Democratic nominee. The results are immediately reported to the nation.

Such an event would undoubtedly refocus the nomination process. The winner of this ultimate “straw poll” would have clear momentum for the nomination. It would be an amazing forum redefining the campaign process with ripple effects into the general election. It may also serve to help the “die hard” supporters of each candidate understand why their candidate may have to cede the field to the opponent prior to the Denver National Convention, thus opening the door for party unity during the general election.

This suggestion is offered as a way to make sure everyone who has been energized during this unique campaign season is not turned-off by outlandish shenanigans relating to rules or credentials fights at the convention itself. While Republicans may relish the thought of the Democrats having a Chicago 1968 style meltdown in Denver, it would diminish the integrity of our electoral process for years to come.
Posted by Scot Faulkner at 9:10 PM

Good to see you on Thomas Jefferson's birthday, the day you posted this blog entry.

Currently in Woodstock, home of General Muhlenberg, pastor who removed his robe to reveal his Continental Army uniform and lead men of his church to fight for God and Country!

You and I and all we influence need to continue to fight for God and Country...

Thanks for your many battles and many victories!