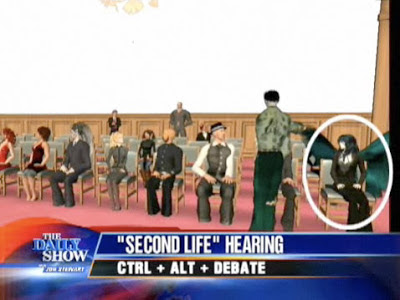 On April 1, Pica Paperdoll, Glitteractica Cookie, and an array of other avatars, attended a virtual version of the House Energy and Commerce Committee.

The committee’s stated purpose was to delve into possible terrorist use of Second Life, and other virtual reality environments, for online recruiting. One could debate the novelty versus substance elements of the hearing, but I want to raise a different issue.

Early in 1995, I recommended that every hearing room in Congress be wired to allow for live video and audio transmission. Many of these meeting rooms already had an array of audio capabilities, some going back to the days of radio.

My plan was simple – install two small robotic cameras in each hearing room. One camera would face the Members, the other would face the witnesses. In the era of the early Internet, I recommended offering these feeds to CSPAN. “We could have CSPAN 2-50”, I quipped. Later, the technology would allow for direct feeds to the Internet via “webcasting”.

My idea was met with cries of horror from nearly all Members. “We don’t want the hearings to be that public!” was echoed by Members from both parties.

Public hearings should be public. Most Congressional hearing rooms hold between 50-200 people. A few can hold up to 400. That means that only a microscopic few out of 300 million citizens get to attend and witness one of the most the fundamental functions of Congress.

CSPAN does a wonderful job broadcasting hearings, but the numbers are against it. On an average day, when Congress is in session, there are approximately 45 House and Senate committee hearings and meetings. Some of these have witnesses, some are mark-ups and votes on legislation. CSPAN may broadcast two of these hearings a day. That means, at best, normal citizens are able to watch maybe 8 out of 180 meetings a week, or 4% of what is really happening.

The avatar hearing proves that Congress can webcast hearings. I live in tiny Jefferson County, West Virginia with a population of 48,000 people. Three years ago the county government spent $4,000 to wire two meeting rooms for webcasting. Now every meeting is online, both real time and through a permanent archive.

If Jefferson County can do it, why can’t the Congress?
Posted by Scot Faulkner at 1:31 PM