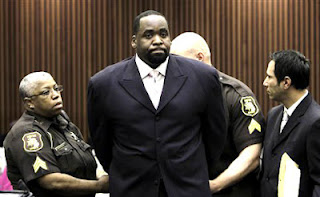 Now we have Kwame Kilpatrick, the mayor of Detroit, embroiled in scandal and facing eight felonies for diverting $8.4 million in tax dollars to cover-up his affair. In his case, a mountain of emails and text messages prove that he and his chief of staff lied under oath. Mayor Kilpatrick is indignant to the charges and his attorney is trying to find legal loopholes to suppress the evidence.

Welcome to the era of “if you have no shame you have no limits”. David Paterson, only days into being Governor of New York, is now admitting to major drug use and still parsing about dallying with public employees. Senator Larry Craig continues disassembling about wide stances and his legal rights after getting caught in a gay sex sting. Senator David Vitter dismisses his link to prostitutes as “old news”. These, and countless other cases involving lesser elected and appointed official across America, are showing us that the concept of “public servant” is as extinct as the dodo bird.

Remember the “good old days” of the Watergate scandal? Most of Nixon’s officials were actually sorry for what they did and full of guilt. They resigned, they plead guilty, they served time, and in many instances, became changed men. Egil "Bud" Krogh personally visited and apologized to those he wronged and is now teaching ethics so people learn from his mistakes. Charles “Chuck” Colson started a highly successful prison ministry. John Dean became a crusader for open and accountable government.

President Bill Clinton changed the ground rules. He first lied about Jennifer Flowers. Then he lied about Paula Jones. Then he lied about Monica Lewinsky. In each case the mainstream media went along with his lies because he was so defiant and unapologetic. Many commentators thought of Clinton, at worst, as a charming rascal. Whenever evidence surfaced that proved Clinton lied, he cavalierly dismissed it as “old news” even if were only months old.

Clinton was the ultimate cynic in an age of cynicism. I remember wondering why he and Hillary walked from the Marine One helicopter to the White House, hand-and-hand with their arms bent, a very awkward stance. Then one day I watched the video on CNN. Their hands were above the news scroll! They or their staff had actually calculated the fixed camera angles to make sure people saw them holding hands. On another occasion President Clinton began weeping when the cameras turned to him at a funeral and then went back to smiling and laughing.

The Clintons raised insincerity to a high art. We are now reaping a bitter harvest of “public officials” who thumb their nose at the law, their oath of office, their public and personal responsibilities, and at all of us. Their lack of shame, ethics, and morals, eviscerates public trust in government. Our civic culture and the future of our nation are at risk.

It is time to bring back a quaint concept – ostracism. We should deprive these people of our applause, our attendance at their events, and their being at the podium of our organizations. They do what they do because they can get away with it – with impunity. We need to show our own moral fortitude by saying “not this time”. If we don’t draw the line now then when will we?
Posted by Scot Faulkner at 10:08 PM