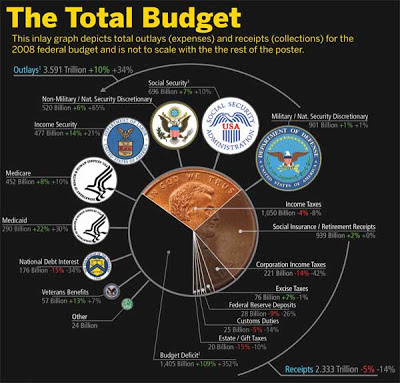 Every American is affected by the federal budget, but only a chosen few can do anything about it. As Congress and the administration begin their yearly struggle over spending, it is time to explore new ways to build a better budget.

Government remains the most inefficient method of addressing public problems. My 30-plus years reviewing and administering federal spending have shown American taxpayers receive an average of 24 cents of tangible value out of every public dollar spent. That means 76 percent of federal funds disappear into inefficient and ineffective operations, inflated overhead costs, poor administration, questionable procurements, and an array of fraud and abuse.

The exposure of the mind-boggling wastes of public funds in rebuilding New Orleans and Iraq are mere tips of the iceberg of what really happens with our tax dollars. The main beneficiaries of this 76 percent are unaccountable officials, lobbyists and contractors. Politicians also benefit by issuing news releases showing how much more money is being spent to address a particular issue. These same politicians rarely follow up to see if the money has actually done any good.

The first step in making government more efficient and accountable is giving everyone timely and meaningful information on the federal budget. While some small incremental steps have been taken in this direction, they all suffer from after-the-fact reporting procedures that allow public officials to still game the system. Real reform means anyone could search and review the entire federal budget. Real reform means an accounting system for the federal government that is up to private sector standards, including automatic data capture of all transactions and the real time, or monthly, display of those transactions in meaningful and understandable formats. No more funny money, accounting games and hidden boondoggles.

Such a system is possible, but the governing elite of Washington refuses to do it. Think of what would happen if everyone became his own Government Accountability Office (GAO). Conservatives would pore over welfare and regulatory spending. Liberals would pore over defense spending. The media, the blogs and the Congress would unleash millions of citizen “deputy sheriffs,” auditors and investigative reporters demanding the enforcement of legislative mandates and exposing waste, fraud and abuse. There would be a revolution in the way government operated, as everyone would be able to find out and expose how public funds are squandered with impunity.

The American people should also have the right to fully participate in the budget process in a meaningful way. This means more than just writing their Members and watching lobbyists swarm the Appropriations Committees. It is time to have a national referendum on spending.

Many have mused how people get mad about government on April 15 because it is tax day, but have no way to vent their frustrations until Election Day in November. What if there was a way to merge the two days in a unique way?

Tax day is the one day we all feel the impact of the federal government. Imagine if tax day also became budget day? The Internal Revenue Service could provide everyone with a budget form that listed all major federal programs. Each taxpayer would be given a hypothetical $100,000 to allocate for these programs. Details about minimum allocations and the expansiveness of the program list would need to be worked out. The budget forms would be submitted with the tax returns. In essence, there would be a nationwide referendum on spending every April 15.

The allocations would be totaled and the percentages of that total would be applied to the actual federal budget moving through the Congress. For the first few years this public input would be only advisory. As the kinks were worked out and people became savvier about how to allocate their $100,000, the advisory referendum could evolve into actually directing the spending priorities of the federal government.

For example, require a two-thirds vote of both Houses of Congress to allocate more or less funds than were allocated by the referendum for a particular line item. National disaster assistance and declared wars could be exempted.

Over time, the April 15 “Budget Day” spending referendum would become as important as Election Day. Instead of spending their time swaying 435 House and 100 Senate members, the special interests and federal agencies would have to persuade the 132 million people who file tax returns. This would revolutionize the way government operates and fully engage everyone in how our money is spent.

Posted by Scot Faulkner at 3:37 PM