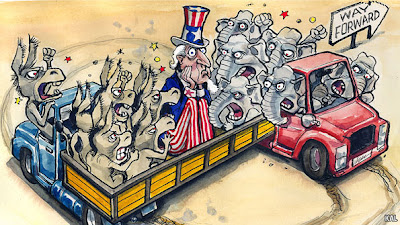 The following was published in The Washington Times
http://www.washingtontimes.com/news/2007/aug/8/political-hams-and-hot-dogs/

These indicate starkly that both parties disappoint Americans. This new low transcends specific issues, like the Iraq war. Gallup began tracking confidence in Congress in May 1973. That means Congress weathered the Vietnam War, Watergate, recessions and gas lines while maintaining higher voter confidence. The new low underscores major institutional weaknesses in how Congress conducts itself in the 21st century.

It has long been said that, "No man should see how laws or sausages are made." In my years of performance consulting I have, in fact, seen sausages made. At the world's leading hot dog factories, you see prime cuts of meat being processed in a clean and efficient environment operated by dedicated professionals devoted to quality assurance. I devour hot dogs knowing the integrity of these producers' brands is at stake with every bite.

It is, therefore, dismaying that Congress does not share the same concern about brand integrity as hot dog producers. Instead of a sausage factory, the House projects the image of a huge freshman dorm on a college campus. Everyone is adjusting to living away from home for the first time. Just like college freshmen, they mess around all term and then pull all-nighters to get the minimal work done. Occasionally, they even seek extensions. Look at the end of any congressional session. After many recesses House members will stay in round the clock to complete their work, and then pass a continuing resolution to avoid approving a real budget.

Just like a freshman dorm, the House is a mix: party animals, druggies, slackers, social climbers, jocks, idealists, activists and scholars. During my years as a House staffer and as its chief administrative officer, I encountered nearly half of members and staff displaying some form of addictive behavior including ego, power, greed, sex, drugs and alcohol.

In particular, freshman members and almost all staff can get away with anything, and do. The national media have no interest in the addictions of these small fry. They, therefore, develop an air of invincibility and unaccountability that carries them through their careers. Their lifestyle choices may only catch up with them if they aspire to a major policy position.

This dysfunction was borne out by the dozens of members attending the drug and alcohol rehabilitation programs I managed, and the documents I signed each week relating to legal actions against them. These documents, as many as 50 a week, included bankruptcies, garnishment of wages and court orders relating to not paying alimony and child support.

Recently, the House of Representatives passed its legislative branch appropriations. House members spent an hour discussing the naming of the overblown Capitol Visitor's Center, debating whether culinary school students should practice in the Members' Dining Room and bickering over turf with the House Administration Committee. There was also much posturing over how "green" to make the House's operations.

There was no mention of finding ways to open Congress to the public. Official House Web sites reveal virtually no movement toward new technologies to expand citizen engagement. Where are the podcasts of hearings? Where are the blogs for oversight? It is impossible to e-mail some committee staffs. Many members block e-mails from outside their districts. How is a concerned citizen to gain the attention of a national advocate on their particular issue?

The answer to these questions is the same since the Continental Congress. You can write a letter to a member or work through a lobbyist. I once wrote a member about preserving a Civil War battlefield and got inundated with letters on veterans' benefits.

Members are not listening or paying attention to what is happening. Congress has not learned a thing from the voter rebellions of 1994 and 2006. It is not just time for new blood and third parties but to rethink how we make representative government work in the 21st century.
Posted by Scot Faulkner at 4:08 PM