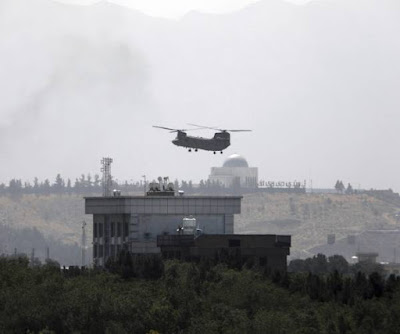 America’s catastrophic retreat from Afghanistan did not need to happen.

It was not just a failure of commonsense. It was multiple violations of State and Defense Department regulations.

These evacuation procedures are institutionalized in the U.S. Code, Code of Federal Regulations, and Executive Orders.

In July 1998, there was a clear and detailed Memorandum of Understanding signed between the DOD and State on evacuation coordination “of U.S. Citizens and Nationals and Designated Other Persons from Threatened areas overseas.”

Those responsible for ignoring and blatantly violating these longstanding rules must be held fully accountable and punished.

The lives already lost, and the many more lives still in danger, are a terrible price to pay for their criminal incompetence and negligence.

The other outrage is how this widespread malpractice, possibly malicious, violated the norms of protecting Americans and their allies dating back to our nation’s founding.

James Monroe, as ambassador to France, embodied the noblest values of America’s Foreign Service. He established a lasting set of values for those representing America abroad.

When the horrors of the French Revolution swept over Marquis de Lafayette and his family, Monroe and his wife, risked their own lives to save them. This was dangerous.

Lafayette’s wife, Adrienne, had watched her grandmother, mother, and sister die on the guillotine. She languished in prison awaiting her own execution, while the Prussians imprisoned her husband.

Monroe’s Parisian apartment served as a sanctuary for American’s fleeing the Revolution, including Thomas Paine.

This timeless set of fundamental values was on full display during my tenure as U.S. Peace Corps Director in Malawi, East Africa.

As a member of the Embassy Executive Team, I was involved in evacuation simulations. We identified mustering points throughout Malawi for gathering evacuees and constantly refined ways to quickly move everyone from the official, and unofficial, American communities to safety.

We slept with walkie talkies by our beds, testing them every Wednesday morning.

We all played a role in identifying and maintaining contact with Americans living and working throughout the country. These included Americans working with multi-national organizations, such as the World Bank, UNESCO, and WHO.

There was also an array of individuals and families tied to religious missions, NGOs and businesses.

My primary role was to keep the Peace Corps volunteers safe. In the mid-1980s landlines, radios and physical travel were the only means of communication.

This was supplemented by maintaining a seamless relationship with the American Embassy team and officials within the Malawi government at all levels. I visited all 28 districts, building relationships with district officials, mayors and tribal leaders.

This was intended to forge bonds so they would look out for my volunteers and other Americans scattered across the country.

There was also close coordination between the other volunteer networks from Japan, Sweden, Canada and the U.K. My tenure as chair of the Volunteer Council developed collaborative protocols for emergency communication and logistical support.

There were the volunteers themselves. A Peace Corps Volunteer Council served as an ongoing forum for improving the effectiveness and health of the volunteers. It also became an opportunity to coach its members on leadership, communication and problem-solving skills.

The most able became the informal regional leaders for supporting their colleagues in the field, and to serve as hubs for disseminating information, and possibly for mustering in an emergency.

Malawi was generally safe, but the lower third of the country was a peninsula surrounded by Mozambique. From 1977 until 1992 RENAMO, the Cuban and Soviet backed government, fought a vicious civil war with anti-Communist FRELIMO. On countless occasions, the competing forces would transit southern Malawi as a shortcut.

The obsession with safety and health permeated everything we did at the embassy and within the Peace Corps. This is what Americans should always expect from their overseas missions.

It is appalling and abhorrent that these time-honored, and legally binding responsibilities were so completely ignored in the rush to abandon Afghanistan.

Posted by Scot Faulkner at 4:10 PM