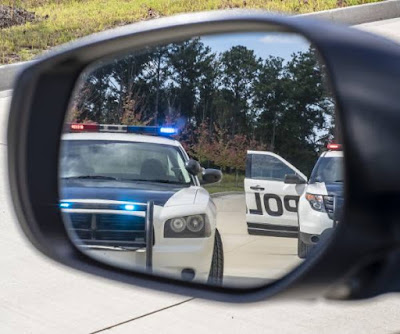 Moments earlier, I was looking at the posted menu outside a restaurant we visited years before.  Vicki had dropped me at their front door while she drove to the parking area behind the restaurant.  Then things began to happen.

Vicki roared out of the alley, slammed on the breaks, and screamed, “get in!”

I jumped in and we quickly drove off.

“Something bad is happening back there”, gasped Vicki, “guys were on the ground.  Others had guns.”

Two blocks later, an unmarked police car was speeding up from behind us with lights flashing.  We saw a strip mall on our right and pulled in.

The two men jumped out of their car and, with guns drawn, stood on each side of our car and shouted for us to get out, turn around, and put our hands on the roof.

After checking our IDs they holstered their weapons and apologized.

The older man was FBI, and the younger a policeman.  They explained they were part of a drug taskforce that was arresting people from inside the restaurant, which they claimed was a drug trafficking hub.  Our car matched the description of one of the drug dealer vehicles.

They apologized again and wished us a pleasant evening. We cautiously continued home, waiting for our adrenaline levels to return to normal.

We had become a statistic – “an unjust police stop”.

Police interactions have become the lightning rod for the Left’s assault on law & order. It is now commonplace for the media, activists, and politicians to showcase incidents of police shootings. Breaking news occurs when victims are unarmed criminals, or the rare instances of unarmed non-criminals, being killed, wounded, or just “harassed”.

Even though the number of police shootings are down, and police being shot are up, interactions that end badly are being promoted as evidence of America being a fundamentally racist unjust society.

Problematic Police interactions are positioned to justify teaching Critical Race Theory, 1619, White Privilege, Systematic Racism, Institutional Racism, Conscious Inclusion, and Unconscious Bias in classrooms and work settings.  It has ushered in changing terms from “Equality” to “Equity”.  It is the driving force behind “defunding the police” and “reimagining law enforcement”.

Police pull over about 20 million drivers across the United States each year, according to Stanford University.  Various studies try to prove racial bias, and profiling, lead to “unjust police stops” and escalation to violence against “people of color”.

Newsweek recently reported there is “significant data showing” that the U.S. is plagued by “systemic racism.” Their evidence is the “NAACP found that from 2017 to 2020, Black men were five times more likely than white people to be stopped by law enforcement without a valid reason.”

However, the Left’s facts, do not match the real facts.

A 2016 study in the Journal of Social Issues shows:

“In 2018 there were 7,407 black homicide victims. Assuming a comparable number of victims last year, those nine unarmed black victims of police shootings represent 0.1% of all African-Americans killed in 2019. By contrast, a police officer is 18½ times more likely to be killed by a black male than an unarmed black male is to be killed by a police officer.”

Justice Quarterly reported on a New Jersey study finding that while black drivers were more likely to be pulled over than white drivers, “police stop rates matched very closely the rates at which drivers” of different races “exceeded the speed limit by 15 mph.”

The major factor in preventing “unjust police stops” from escalating is what Vicki and I did during ours – we complied.

There is a legitimate role for law enforcement in any society.  It is a risky, thankless, and stressful task.

We should honor those who wake-up every day to assure our peace and security.

Posted by Scot Faulkner at 9:46 PM