HOW ANTIETAM CHANGED EVERYTHING 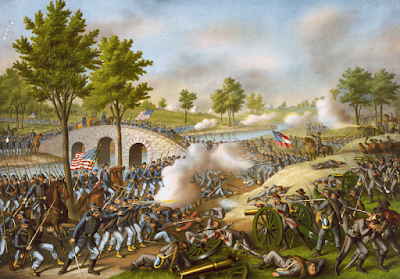 
America’s bloodiest day was also the most geopolitically significant battle of the Civil War.


On September 17, 1862, twelve hours of battle along the Antietam Creek, near Sharpsburg, Maryland, resulted in 23,000 Union and Confederate dead or wounded. Its military outcome was General Robert E. Lee, and his Army of Northern Virginia, retreating back into Virginia. Its political outcome reshaped global politics and doomed the Southern cause.


The importance of Antietam begins with President Abraham Lincoln weighing how to characterize the Civil War to both domestic and international audiences. Lincoln choose to make “disunion” the issue instead of slavery. His priority was retaining the border states (Delaware, Kentucky, Maryland, and Missouri) within the Union. [1]


The first casualties of the Civil War occurred on April 19, 1861 on the streets of Baltimore. The 6th Massachusetts Regiment was attacked by pro-South demonstrators while they were changing trains. Sixteen dead soldiers and citizens validated Lincoln’s choice of making the Civil War about reunification. Eastern Maryland was heavily pro-slave. Had Maryland seceded, Washington, DC would have been an island within the Confederacy. This would have spelled disaster for the North.


To affirm the “war between the states” nature of the Civil War, Lincoln’s Secretary of State, William Seward, issued strict instructions to American envoys to avoid referencing slavery when discussing the Civil War. [2]


Explaining to foreign governments that the conflict was simply a “war between the states” had a downside. England and France were dependent on Southern cotton for their textile mills. “Moral equivalency” of the combatants allowed political judgements to be based on economic concerns. [3]


On April 27, 1861, Lincoln and Seward further complicated matters by announcing a blockade of Southern ports.  While this was vital to depriving the South of supplies, it forced European governments to determine whether to comply. There were well established international procedures for handling conflicts between nations and civil wars. Seward ignored these conventions, igniting fierce debate in foreign governments over what to do with America. [4]


England and France opted for neutrality, which officially recognized the blockade, but with no enforcement. Blockade runners gathered in Bermuda, and easily avoided the poorly organized Union naval forces, while conducting commerce with Southern ports. [5]


Matters got worse. On November 8, 1861, a Union naval warship stopped the Trent, a neutral British steamer travelling from Havana to London. Captain Charles Wilkes removed two Confederate Government Commissioners, James Mason and John Slidell, who were on their way for meetings with the British Government. [6]


The “Trent Affair” echoed the British stopping neutral American ships during the Napoleonic Wars. Those acts were the main reason for American initiating the War of 1812 with England.


British Prime Minister, Lord Henry Palmerston, issued an angry ultimatum to Lincoln demanding immediate release of the Commissioners. He also moved 11,000 British troops to Canada to reinforce its border with America. Lincoln backed down, releasing the Commissioners, stating “One war at a time”. [7]


While war with England was forestalled, economic issues were driving a wedge between the Lincoln Administration and Europe.


The 1861 harvest of Southern cotton had shipped just before war broke out. In 1862, the South’s cotton exports were disrupted by the war. Textile owners clamored for British intervention to force a negotiated peace.


In the early summer of 1862, bowing to political and economic pressure, Lord Palmerston drafted legislation to officially recognize the Confederate government and press for peace negotiations. [8]

During the Spring of 1862, Lincoln’s view of the Civil War was shifting. Union forces were attracting escaped slaves wherever they entered Southern territory. Union General’s welcomed the slaves as “contraband”, prizes of war similar to capturing the enemy’s weapons. This gave Lincoln a legal basis for establishing a policy for emancipating slaves in the areas of conflict.


Union victories had solidified the Border States into the North. Therefore, disunion was not as important a justification for military action. In fact, shedding blood solely for reunification seemed to be souring Northern support for the war.


Lincoln and Seward realized emancipating slaves could rekindle Northern support for the war, critical for winning the Congressional elections in November 1862. Emancipation would also place the conflict on firm moral grounds, ending European support for recognition and intervention. England had abolished slavery throughout its empire in 1833. It would not side with a slave nation, if the goal of war became emancipation. Lincoln embraced this geopolitical chess board, “Emancipation would weaken the rebels by drawing off their laborers, would help us in Europe, and convince them that we are incited by something more than ambition”. [9]

On July 22, 1862, Lincoln called a Cabinet meeting to announce his intention to issue the Emancipation Proclamation. It was framed as an imperative of war, “by virtue of the power in me vested as Commander-in-Chief, of the Army and Navy of the United States in time of actual armed rebellion against the authority and government of the United States, and as a fit and necessary war measure for suppressing said rebellion.” [10]

Seward raised concerns over the timing of the Proclamation. He felt recent Union defeats outside of the Confederate Capital of Richmond, Virginia might make its issuance look like an act of desperation, “our last shriek, on the retreat.” [11] It was decided to wait for a Northern victory so that the Emancipation could be issued from a position of strength.

Striving for a game-changing victory became the priority for both sides. The summer of 1862 witnessed a series of brilliant Confederate victories. British Prime Minister Palmerston agreed to finally hold a Cabinet meeting to formally decide on recognition and mediation. [12]


General Lee wished to tip the scales further by engineering a Confederate victory on northern soil. [13] Lee wanted a victory like the 1777 Battle of Saratoga that brought French recognition and aid to America. [14]

The race was on. General Stonewall Jackson annihilated General John Pope’s Army in the Second Battle of Manassas (August 28-30, 1862).  Lee saw his opportunity, consolidated his forces, and invaded Maryland on September 4, 1862.


After entering Frederick, Maryland, Lee divided his forces to eliminate the large Union garrison in Harpers Ferry, which was astride his supply lines. Lee planned to draw General George McClellan and his “Army of the Potomac” deep into western Maryland. Far from Union logistical support, McClellan’s forces could be destroyed, delivering a devastating blow to the North. [15]


A copy of Special Orders No. 191, which outlined Lee’s plans and troop movements, was lost by the Confederates, and found by a Union patrol outside of Frederick. [15] On reading the Order, McClellan, famous for his slow and ponderous actions in the field, sped his pursuit of Lee.


Now there was a deadly race for whether Lee and Jackson could neutralize Harpers Ferry and reunite before McClellan’s army pounced. This turned the siege of Harpers Ferry (September 12-15, 1862), the Battle of South Mountain (September 14, 1862), and Antietam (September 17, 1862) into the Civil War’s most important series of battles.


While Antietam was tactically a draw, heavy losses forced Lee and his army back into Virginia. This was enough for Lincoln to issue his Preliminary Emancipation Proclamation, five days after the battle, on September 22, 1862. When news of the Confederate retreat reached England, support for recognition collapsed, extinguishing, “the last prospect of European intervention.” [17] News of the Emancipation Proclamation launched “Emancipation Meetings” throughout England. Support for a Union victory rippled through even pacifist Anti-Slavery groups who asserted abolition, “was possible only in a united America.” [18]


There were many more battles to be fought, but Europe’s alignment against the Confederacy sealed its fate. European nations flocked to embrace Lincoln and his Emancipation crusade. One vivid example was Czar Alexander II, who had emancipated Russia’s serfs, becoming a friend of Lincoln. In the fall of 1863, he sent Russian fleets to New York City and San Francisco to support the Union cause. [19]


Unifying European nations against the Confederacy, and ending slavery in the South, makes America’s bloodiest day one of the world’s major events.


[14] McPherson, James, The Saratoga That Wasn’t: The Impact of Antietam Abroad, in This Mighty Scourge: Perspectives on the Civil War (New York: Oxford University Press, 2007), pages 65-77.

Posted by Scot Faulkner at 5:55 PM